Another failed presidential vote, telecoms strike, flooded roads to be repaired: Everything you need to know to start your Friday

Here’s what happened yesterday and what to expect today, Friday, Dec. 2: 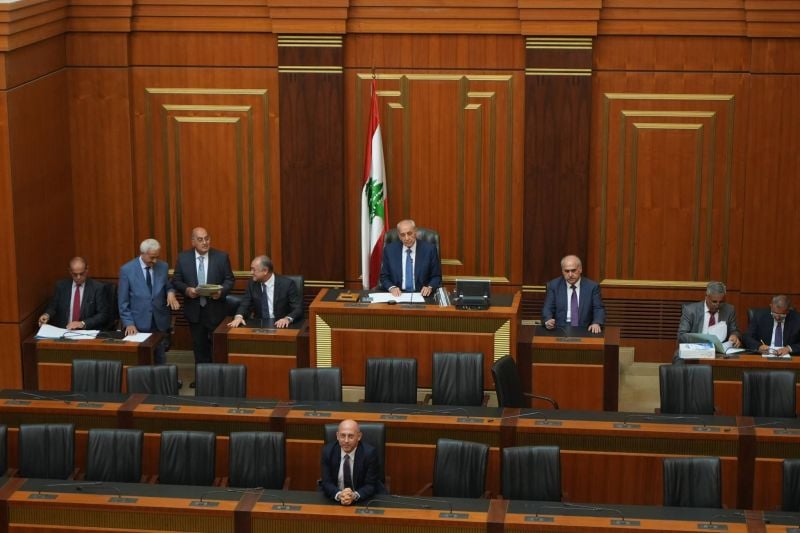 Parliament is scheduled to reconvene for a ninth presidential election session next Thursday after yet another blank vote majority yesterday at the start of the second month of a dual executive vacuum. The outcome of yesterday’s vote resembled previous sessions as Zgharta MP Michel Moawad remained the only apparent candidate, receiving 37 votes from Lebanese Forces and allied MPs, against a majority of protest votes — divided between blank ballots cast by Hezbollah, Free Patriotic Movement and allied MPs along with canceled ballots containing patriotic slogans or unlikely candidates, such as Luiz Inacio Lula da Silva, a former president of Brazil. Parliament lost quorum after the first round of voting, as has consistently happened during previous sessions, preventing subsequent rounds during which candidates need fewer votes to accede to the presidency. While different parliamentary blocs struggle to reach a consensus, differences among allies emerged as rumored Hezbollah-preferred candidate, Marada head Sleiman Frangieh, was dismissed by FPM head Gebran Bassil. Parliament Speaker Nabih Berri — who, faced with FPM and LF opposition, withdrew a dialogue initiative to break the stalemate — has said he would intervene if no president is elected before the end of the year. The electoral impasse will not prevent Parliament from convening for other purposes, as some feared it would or claimed it should, as Berri scheduled a session next Wednesday to discuss alleged corruption in the telecoms sector. “It is not because the presidential election sessions are being hindered that people's access to hospitals should be hindered too,” Progressive Socialist Party MP Bilal Abdallah said at the end of the vote, calling for the scheduling of a session to discuss the Health Ministry’s budget.

Employees of public mobile telecoms operators Alfa and Touch announced a strike for Friday allegedly disparate and politically motivated practices within the firms. The Syndicate of Workers and Employees of Companies Operating the Telecom Sector claimed in a statement that the companies practiced "political clientelism and subordination in promotions and incentive distribution." The syndicate announced the strike shortly after Parliament Speaker Nabih Berri scheduled a session to review complaints alleging corruption in the telecoms sector and citing irregular hiring practices among the purported violations. A two-week strike by Ogero employees in August demanding improved wages led to widespread telecom outages, including mobile services, and interfered with the functioning of numerous institutions, such as the disruption of the Red Cross emergency line in southern Lebanon.

The Public Works Ministry allocated funds for road maintenance as Jounieh residents said their rain-ravaged homes were rendered “uninhabitable” by the flooding from a storm earlier this week. “The Council for Development and Reconstruction has been entrusted with the maintenance work on roads according to the needs of road safety, thanks to an amount of $22 million taken from the World Bank loan," wrote caretaker Public Works Minister Ali Hamieh. Dilapidated infrastructure received part of the blame after torrential rains have repeatedly flooded roads and highways across Lebanon this year, most recently inundating Kesrouan and Jbeil. According to the Lebanon Weather Forecast, Jounieh, in the Kesrouan district, has flooded three times since the beginning of November. A Jounieh resident told L’Orient Today that the damage to his apartment might be irreparable, while Kesrouan MP Chawki Daccache called on officials to adequately compensate the flooding victims. “We must understand that the climate has changed and our infrastructure is inadequate,” chairman of the Jounieh municipal council and the Federation of Municipalities of Kesrouan Juan Hobeich said.

Caretaker Prime Minister Najib Mikati said the repatriation of Syrian refugees is a “priority,” claiming an inadequate “financial and political capacity” to continue hosting the displaced after a meeting with UN High Commissioner for Refugees (UNHCR) Filippo Grandi. Grandi, for his part, said he was working with Syria to "remove the obstacles" preventing such returns, adding that “a program will be put in place to further increase” UN support to Lebanon. Lebanon launched several “voluntary” repatriation trips for Syrian refugees in October, despite warnings from international agencies claiming the returns were dangerous. Displaced Syrians are often scapegoated by officials for the difficulties in overcoming Lebanon’s crises. In a September letter to UN Secretary-General Antonio Guterres, Mikati claimed the cost of hosting refugees “makes it extremely difficult to address the economic crisis.” Discriminatory violence in some areas has left hundreds of people without shelter. Human rights groups and refugees in August — when officials first intended on implementing repatriation plans — said pressure on the refugees in the form of restrictive local regulations, army raids on camps and, in some cases, deportation, has intensified.

In case you missed it, here's our must-read story from yesterday: “Crisis turns rural Lebanese toward traditional olive oil soapmaking”

Want to get the Morning Brief by email? Click here to sign up.Parliament is scheduled to reconvene for a ninth presidential election session next Thursday after yet another blank vote majority yesterday at the start of the second month of a dual executive vacuum. The outcome of yesterday’s vote resembled previous sessions as Zgharta MP Michel Moawad remained the only apparent candidate,...