This year marks Lebanon’s fourth annual olive harvest since an economic crisis began spiraling out of control in late 2019. Some people are forging ahead with their own spins on a traditional craft: olive oil soap. 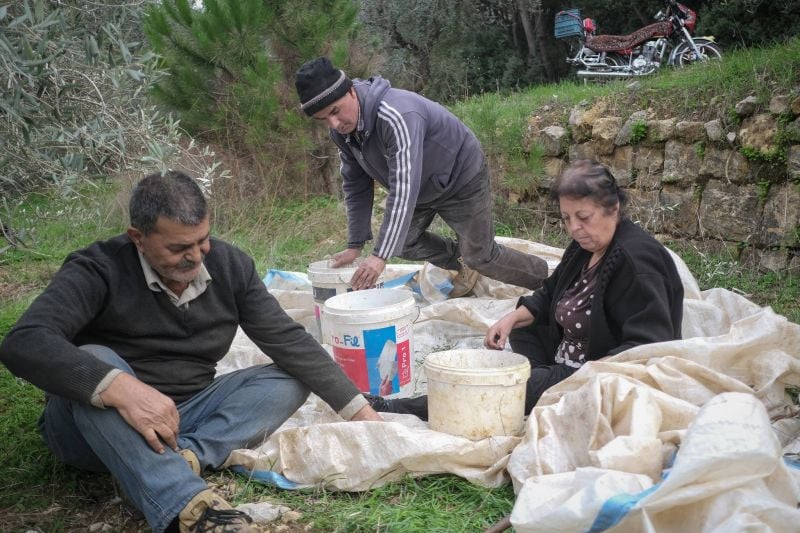 Salman Halabi and his in-laws sort freshly harvested olives at the grove they rent on the outskirts of Abay, a village near Aley, Nov. 15, 2022. (João Sousa/L’Orient Today)

ABAY, Mount Lebanon — Only a few scattered workers remain in the olive groves one November afternoon, most having left behind their plastic tarps to pick up where they left off tomorrow morning.

Hanan Malaeb and her husband Salman Halabi say they’ve been harvesting olives since early morning, spending an hour on each of the dozens of trees in the grove they rent on the outskirts of Abay, a village near Aley. Two hired workers whack the trees with bamboo sticks as Hanan, Salman, their five-year-old son and Hanan’s mother pick up fallen olives from tarps splayed out beneath the trees.

This year has been promising, Halabi says. Most of the olives will go to a local press to be made into edible olive oil sold by the family. But scattered in the dirt are shriveled, inedible, black shitawi olives, bitter-tasting after falling from the trees and left to sit.

Those will go toward making soap. 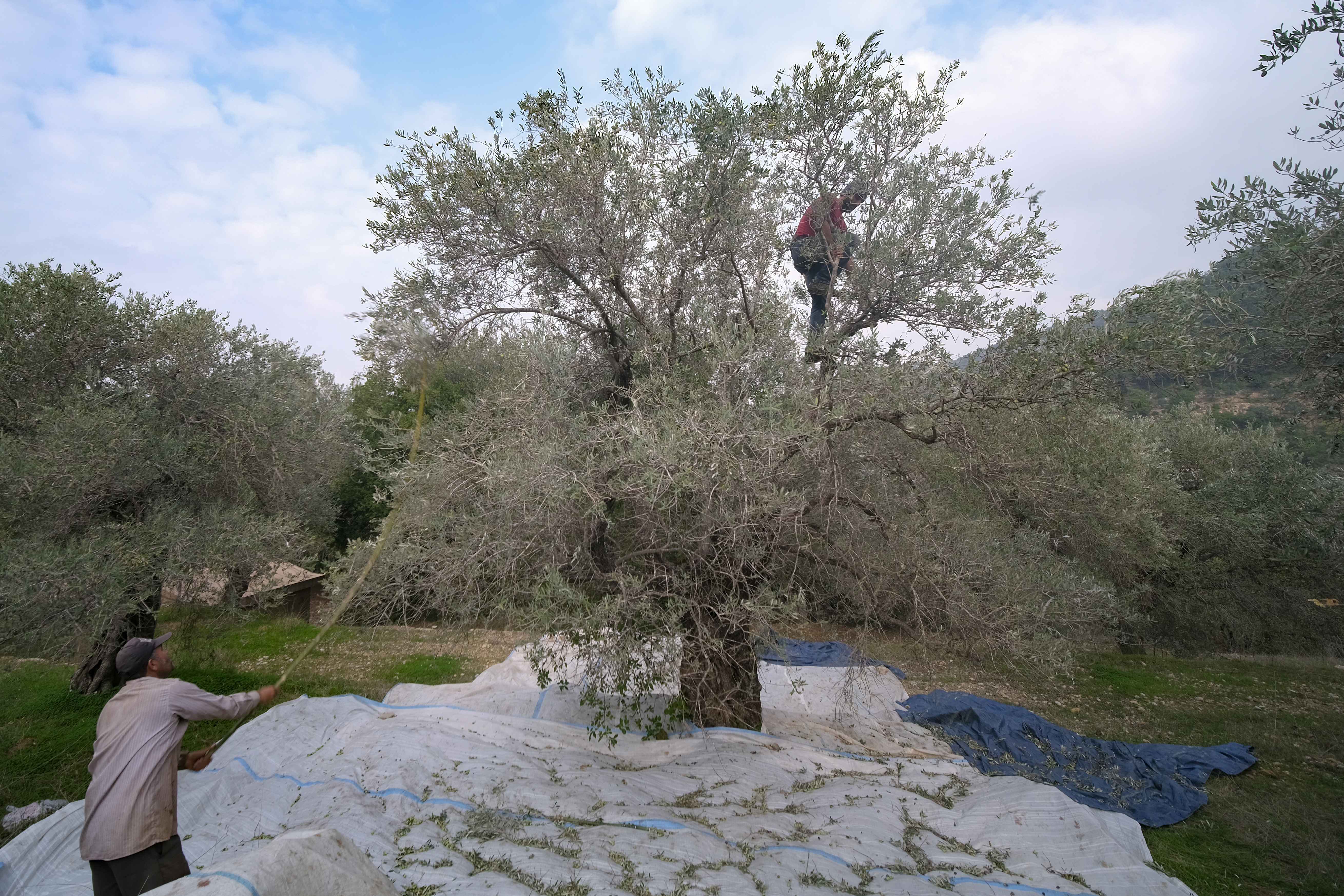 Workers on Hanan Malaeb and husband Salman Halabi’s rented grove near Aley whack an olive tree with bamboo sticks to make the olive trees fall into tarps to be gathered in buckets and sorted. (João Sousa/L’Orient Today)

In Lebanon and other parts of the Mediterranean, traditional soap — saboun baladi — has long been a byproduct of the yearly October-November olive harvest, produced from the oil extracted from freshly picked olives and then left to sit. Hanan and Salman say they, too, sell their olive oil to soap makers.

In the past couple of years, this natural soapmaking method has also become a growing source of livelihood for people in rural parts of Lebanon, as people seek any supplementary income they can find amid the country’s economic downward spiral.

Profits are still marginal, some newcomers tell L’Orient Today, though soap makers who have been in the trade for a bit longer say their businesses are already growing. 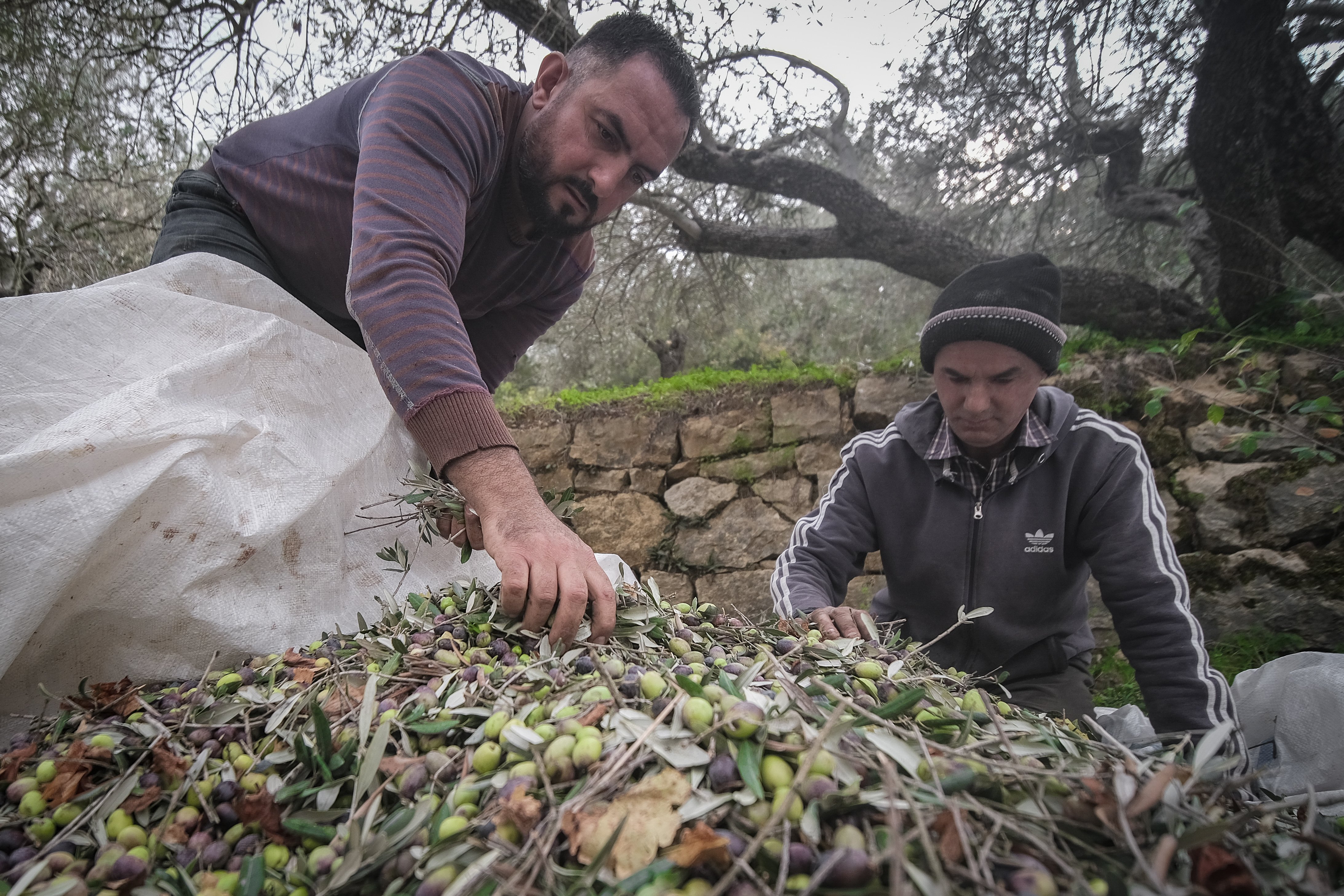 Salman Halabi and a worker sort olives on a grove near Abay, a village near Aley, Nov. 15, 2022. (João Sousa/L’Orient Today)

Consumers, too, are looking for more local products, according to Rosemary Romanos, a Lebanese entrepreneur. She founded Salma, a natural soap and beauty business in Oct. 2019 — just a week before the protest movement that spread across Lebanon and called on the political elite to step down.

Amid the subsequent crisis, “international imported brands were becoming quite inaccessible, which meant that we, as a local business, had an edge,” Romanos tells L’Orient Today.

“We were there already, so just being in the market itself was an opportunity,” Romanos adds. 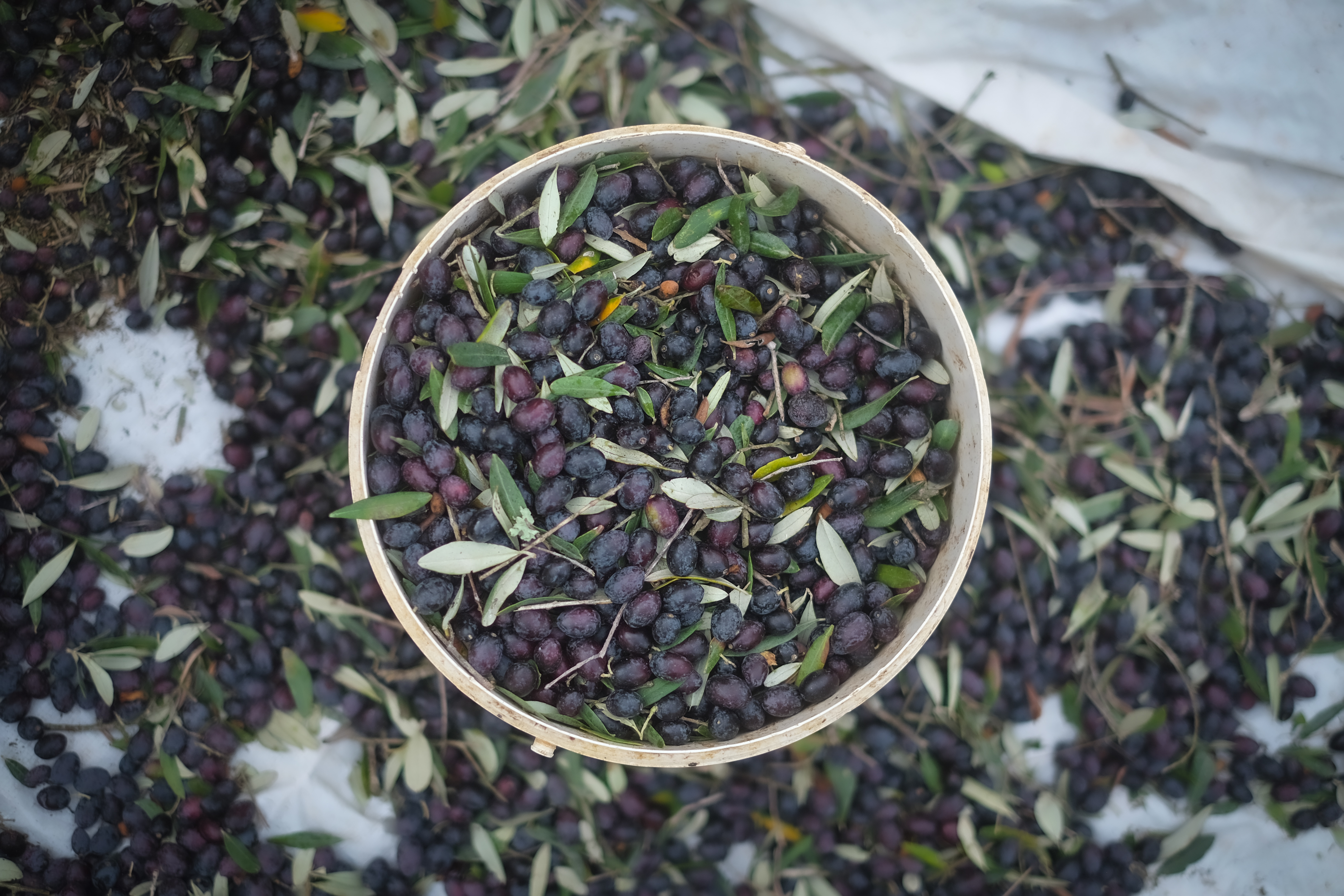 The annual olive harvest falls from September through November. This year has been promising, Halabi says. (João Sousa/L’Orient Today)

Picking up a new trade

Though saboun baladi can be made any time of year, it is traditionally a part of the autumn harvest to free up tank storage space for the year’s new oil extract, according to Salman Hamzeh.

Hamzeh owns a small soapmaking business in Abay, near Hanan and Salman’s family-run orchard. There, in the basement of his family home, he operates a small shop lined with shelves of soaps from his favorite historic soapmakers in Aleppo, Cairo and Marseilles. His own handmade soaps are organized by scent and color and engraved with his company name, Rayan – also the name of his teenage son.

Through a doorway is the workshop where he and an assistant mix and pour the soaps, using an immersion blender and a huge metal pot to infuse them with scented oils and herbs. Plastic, silicone and wooden molds stand at attention. He doesn’t like to give away his exact recipe.

Though Hamzeh works full-time at a bank, he says soap is his “passion.” He started in 2018, but business picked up in the past couple of years after he learned the proper mixing methods. 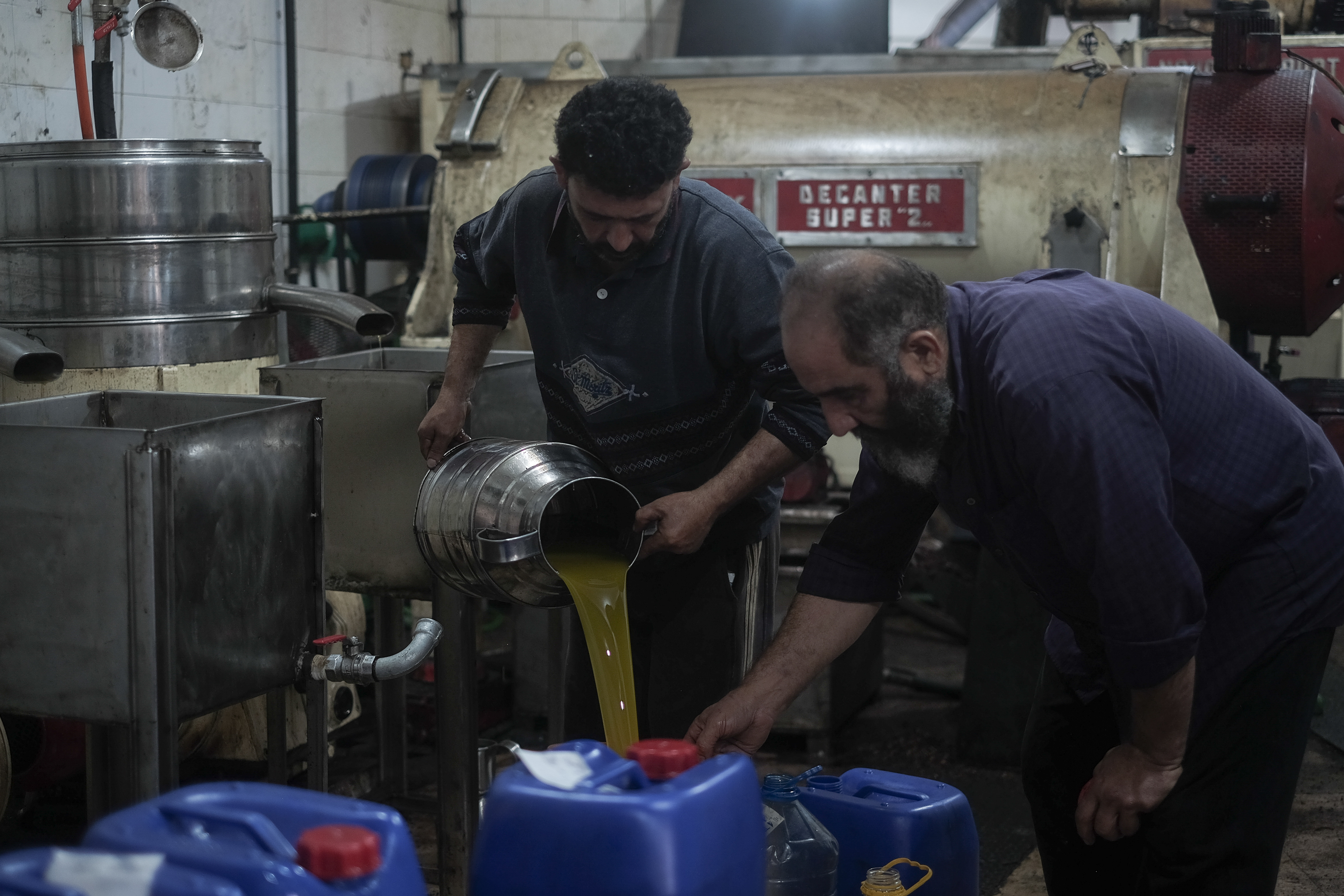 Workers pour freshly extracted olive oil at an olive press in Ain Anoub, a village near Aley, on Nov. 15, 2022. Farmers bring bags of fresh olives to the press, then workers process them through a series of machines and deliver the extracted oil. (João Sousa/L’Orient Today)

The past two years, Hamzeh has also been teaching groups of women in Abay and neighboring villages how to make soap they can sell to others.

Among the women he’s taught is Alia Nasredine, who lives in the nearby village of Deir Qoubel.

She’s a Health Ministry laboratory employee by profession, but started soapmaking two years ago in 2020, at the height of the COVID-19 pandemic and as the country’s economic crisis was in full swing.

“At first I was just doing it as a project with my niece, and we’d give away the soaps to people,” mostly friends and family, Nasredine tells L’Orient Today.

Though Nasredine still makes her soaps from home, she says now she has a specialized workshop that she’s equipping. She hopes to learn social media marketing to grow the workshop into a profitable business.

Until then, she says, “I’m just making a name for myself first.” 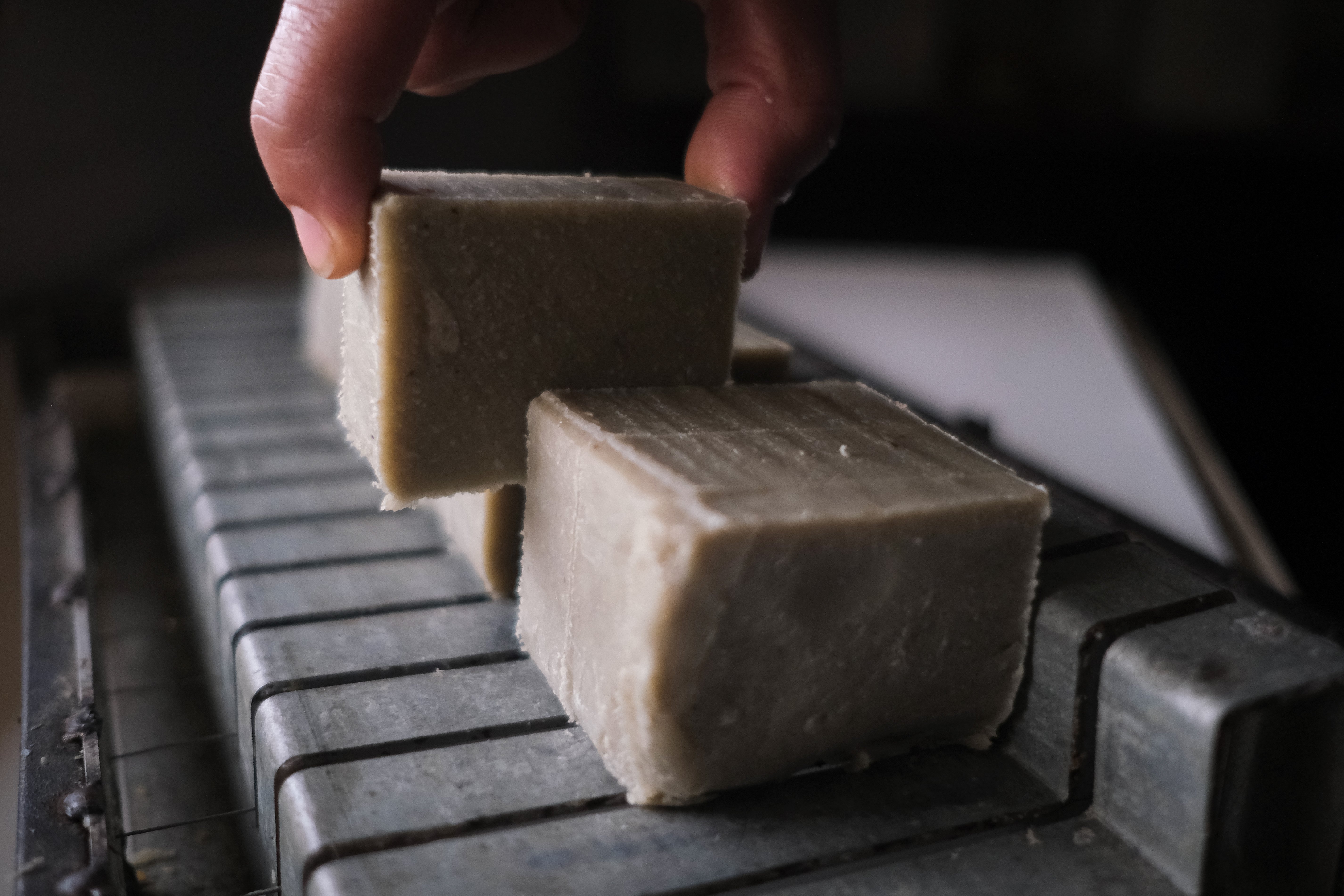 Salman Hamzeh, a soapmaker in Abay, cuts dried and set olive oil soap into bars for sale in his shop, located in the basement of his family home near Aley, Nov. 15, 2022. (João Sousa/L’Orient Today)

‘Connected to the soil’

“When I was a little boy, my grandfather would bring the oil and a carton, and we’d cook it over wood,” he says, sitting in Salman’s basement shop. “We used olive oil from our own field. I started learning when I was young, seven or eight years old.”

“We’d use it for everything: bathing, cleaning, washing dishes.”

Over the decades, that tradition became less ubiquitous, though it was still around to some degree in the years leading up to the crisis.

“In Lebanon, because it’s a small country and everyone knows someone in a village who does soap, [Lebanese people] have always used saboun baladi somewhere in their home. It just wasn’t sexy enough to talk about,” says Romanos.

Traditions aside, starting a soap business is still costly for most people.

A standard 15- or 16-kilogram tank of olive oil needed for the soap base costs anywhere from $100-$120, more than most civil servants’ monthly salaries after the depreciation of the lira. Each kilogram of olive oil yields about 10 soaps, by Nasredine’s estimate.

Any perfumes or bottles imported from abroad can also be pricey, according to Romanos and other soapmakers. 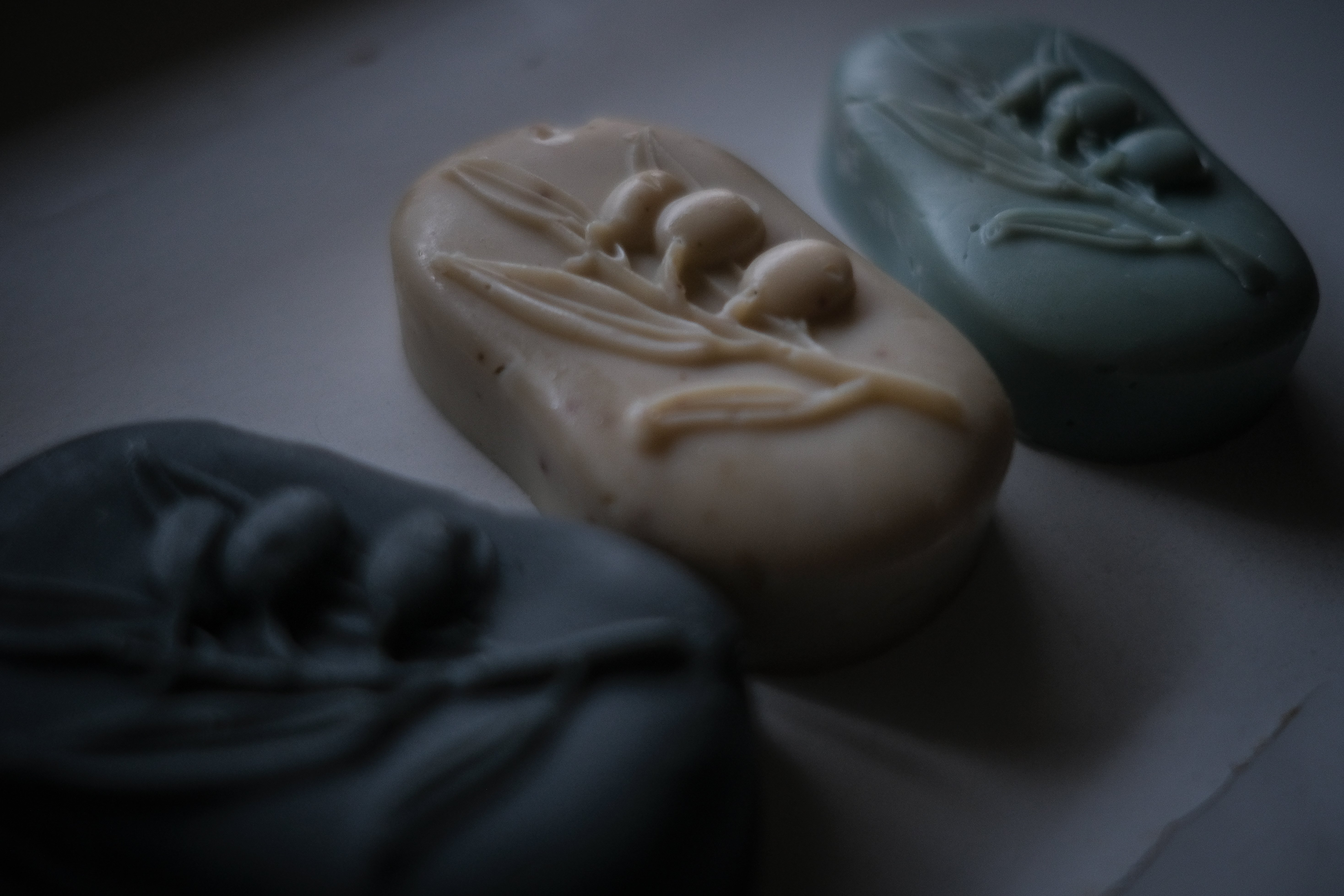 “As a business, it’s very modest, because the oils are very expensive,” says Rodaina Aridi, a 45-year-old woman from Baysour, another village near Aley. Her daytime jobs are with the Social Affairs Ministry and a UNICEF project working with Syrian refugees, though she started making and selling soap a year ago.

“I couldn’t buy [the materials] all at once– I’m buying them in stages,” Aridi says. According to her, 500 grams of imported coconut oil costs $10. Natural collagen, a nutrient for the skin, costs a steep $25 per 500 grams.

Those ingredients could soon become even more expensive. Banque du Liban, Lebanon’s central bank, is set to hike up the exchange rate for calculating customs duties starting Thursday — from the longstanding official rate of LL1,507 per dollar to LL15,000 — a tenfold increase.

That means higher prices for foreign-sourced scents, packaging and other ingredients that the soapmakers need to start their businesses.

Anticipating the change, Hamzeh has already updated his price list. He calculated a 10 percent increase in total costs to make his soaps, which are now priced from $1 to $12 per bar, depending on the ingredients.

Could the price hikes push Lebanese soap makers to turn even more heavily to local materials? 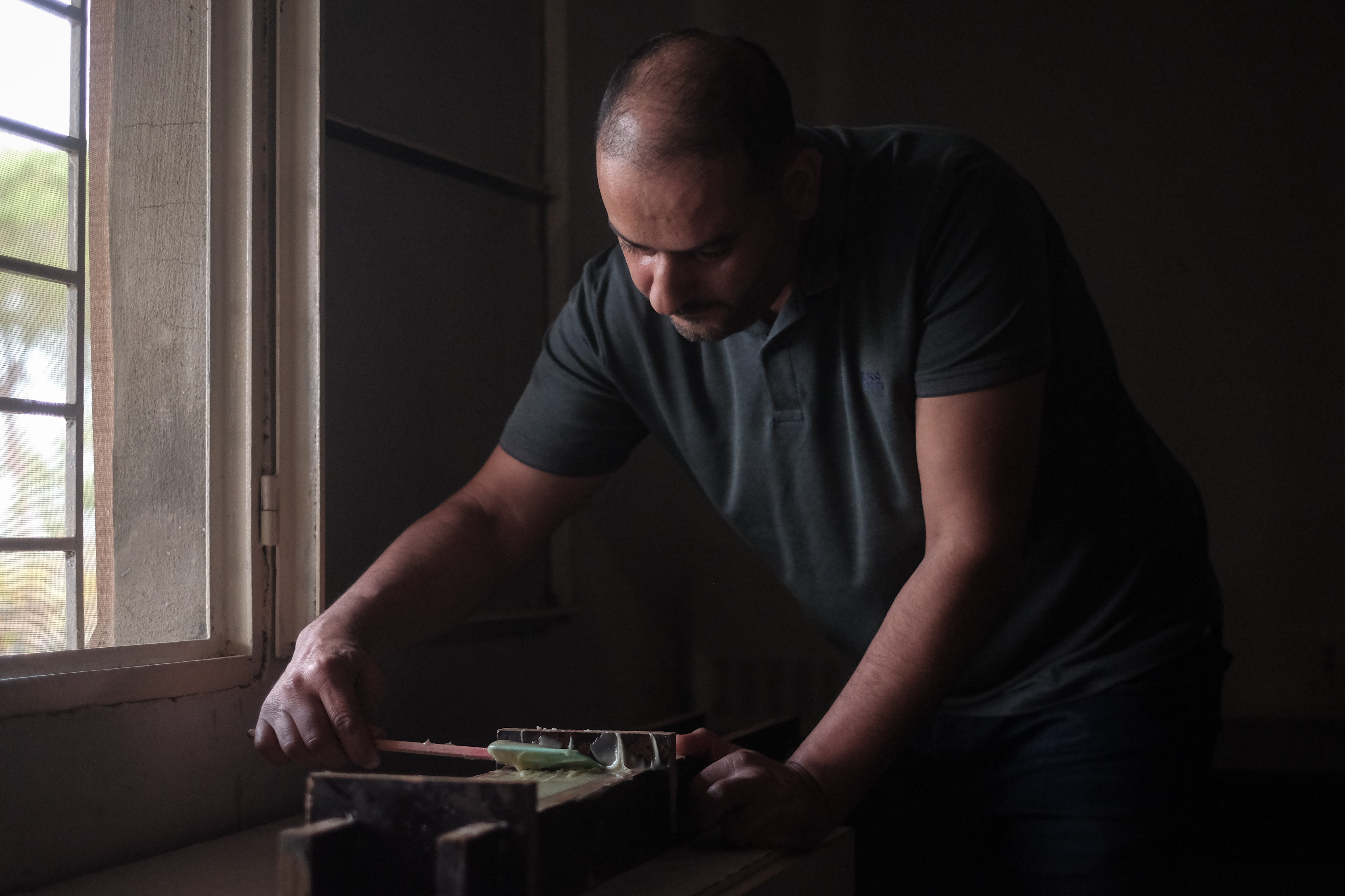 Soapmaker Salman Hamzeh flattens a fresh batch of olive oil soap after pouring it into a mold to dry at his workshop in Abay, a village near Aley, on Nov. 15, 2022. After drying it for a day or two, he will cut the soap into bars for sale at his shop in the basement of his family home. (João Sousa/L’Orient Today)

“For the traditional soap, there’s no need for imported items, only the caustic soda” needed to turn the oil into soap, adds Hamzeh.

And, perhaps, there’s hope for those who started out in soapmaking during the past three years of economic crisis. According to Romanos, her business has been growing, all with 90 percent of its sales inside Lebanon.

Aridi is still working to offset her startup costs, but hoping to grow from there. For now, she sells her soap at LL60,000 to LL120,000 per bar, depending on the ingredients.

“I’m still new. It helps me a little bit with my monthly expenses, but it’s not my main income because I don’t yet have a big workshop. It’s still just a one-person operation,” Aridi says.

For Hamzeh in Abay, his basement soap business is now making him more income than his day job at the bank, he says.

“And I enjoy it more than banking. I feel connected to the soil of my village and my family and my country.”

ABAY, Mount Lebanon — Only a few scattered workers remain in the olive groves one November afternoon, most having left behind their plastic tarps to pick up where they left off tomorrow morning. Hanan Malaeb and her husband Salman Halabi say they’ve been harvesting olives since early morning, spending an hour on each of the dozens of trees in the grove they rent on the outskirts of Abay, a...