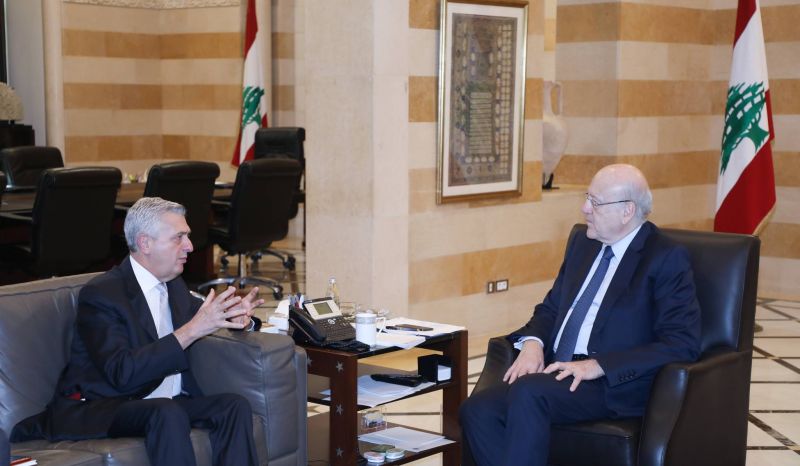 Caretaker Prime Minister Najib Mikati said Thursday that repatriating Syrian refugees is a "priority during this period," adding that Lebanon, in the midst of an economic crisis, the country "can no longer bear the consequences" of hosting them.

For his part, Grandi said in a statement he was working with Syria to "remove the obstacles" preventing such a return, adding that "the UN will increase its assistance to the Lebanese people."

Lebanon hosts around 1.5 million Syrian refugees, the largest number of refugees per capita in the world, while some 839,000 Syrian refugees are currently registered with the UNHCR. The exact number of Syrians in the country is unknown because the Lebanese government requested that UNHCR stop registering new refugees in 2015.

After Thursday's meeting, Mikati stressed "the need for UNHCR and relevant international organizations to coordinate with the Lebanese government, through its specialized bodies, in order to solve this problem," according to remarks reported by Grand Serail. According to Mikati, "this issue should no longer exert pressure on the situation in Lebanon when the country no longer has the financial and political capacity or the necessary services to bear the consequences" of the presence of refugees on its soil. "The priority during this period is to repatriate Syrian refugees gradually after the situation has stabilized in their country," he said.

The mysterious case of the Bathich family, forcibly deported from Denmark

In late November, outgoing Lebanese Social Affairs Minister Hector Hajjar, a strong supporter of the "voluntary" Syrian refugee return plan, implemented by the Lebanese General Security in coordination with Syrian authorities, accused UNHCR of seeking to keep Syrian refugees in Lebanon. "The UNHCR does not have the means to help all the refugees, but it does not encourage them to return either, which makes us ask political questions," he said.

Last October, "about a thousand people" were repatriated to Syria, according to Hajjar, as part of a plan led by the camp close to former president Michel Aoun, which promised to send 15,000 Syrians back to their country each month.

Quoted by the Grand Serail, Grandi said Thursday that "the presence of hundreds of thousands of Syrian and other refugees in Lebanon weighs heavily on the country."

"We continue to provide international resources to refugees and those who wish to repatriate," he reportedly added, saying that "UNHCR continues to support those who have already been repatriated" from Lebanon.

Grandi added that UNHCR was "working with Syria and its government to overcome the serious obstacles accumulated over the past years that prevent the repatriation of refugees. Progress has been made but there is still a long way to go," he said, pointing to some economic and logistical obstacles in Syria where homes have been destroyed in the more than decade-long war.

He also announced that "the UN will increase its assistance to the Lebanese people."

"The UN has already increased its direct support to the Lebanese people," Grandi added, noting that "a program will be put in place to further increase this support."

After his meeting with Mikati, Grandi met with Parliament Speaker Nabih Berri in Ain al-Tineh, Beirut.

"The burden on Lebanon due to the Syrian refugee crisis is now heavy, very heavy," said Berri on the meeting's sidelines, according to the state-run National News Agency. Berri added that the "burden" would have "dangerous consequences for both Lebanon and the refugees."

Lebanese authorities have since 2017 organized "voluntary repatriation" operations that allowed the return of about 400,000 people, based on nominal lists submitted to the Syrian regime in advance.

But NGOs have denounced the "forced returns," as the security situation in Syria remains unsafe, with an ongoing war and reports of arbitrary arrests and military conscription. The UN and the international community believe that the security situation in Syria is not safe enough for mass returns and that repatriation projects should await a resolution of the Syrian conflict.

Caretaker Prime Minister Najib Mikati said Thursday that repatriating Syrian refugees is a "priority during this period," adding that Lebanon, in the midst of an economic crisis, the country "can no longer bear the consequences" of hosting them.Mikati's comments came after a meeting Thursday with UN High Commissioner for Refugees (UNHCR) Filippo Grandi.For his part, Grandi said in a statement he...