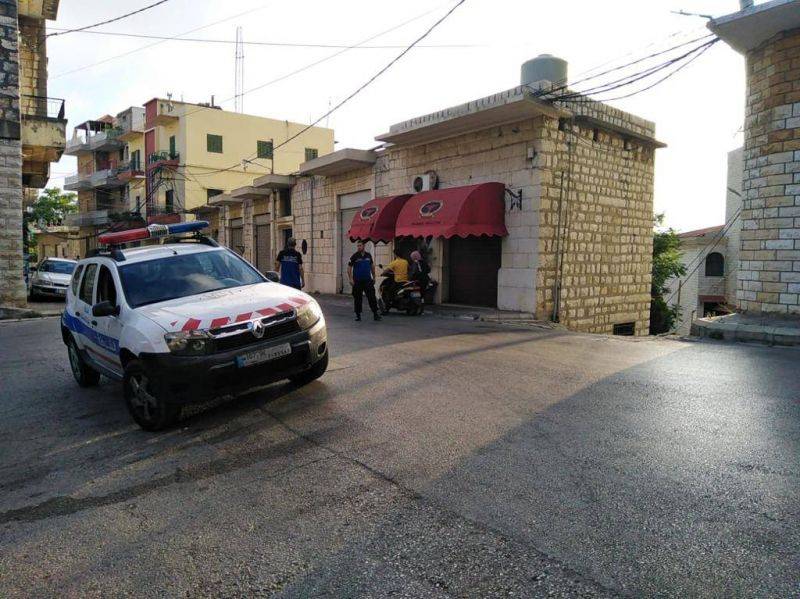 The municipal police of Beit Mery making their rounds to control the presence of refugees without a valid residence permit. (Credit: DR)

Unemployment, banking restrictions, gasoline and bread crises … As Lebanon sinks further into the abyss, the “Syrian,” the “foreigner,” is for some the perfect scapegoat.

The presence of one and a half million Syrian refugees in Lebanon is increasingly perceived as a burden, as evidenced by the government’s rhetoric in recent months, which hopes to send up to 15,000 refugees per month back to Syria in the near future. Despite increased state control of the situation, four municipalities — Beit Mery, Mansourieh, Sin al-Fil and Dekwaneh — have joined forces to strengthen discriminatory measures against Syrian residents in their communities.

In early June, the Lebanese Center for Human Rights (CLDH) pilloried the municipality of Dekwaneh for abusing its authority over refugees. Searches were allegedly carried out on Syrian residents, some of whom were arrested and had their papers confiscated. According to the CLDH, the municipality forced them to sign a release form in which they agreed to return to Syria once their papers were returned. The CLDH claims that the document in question, of which it was unable to obtain a copy, has no legal value.

Syrian refugees in Lebanon enjoy protection, and forcing them to return home is a violation of Law No. 65 on Torture and Article 3 of the “Prevention of Torture” treaty, which Lebanon has ratified.

“When we communicated about this case, the president of the municipal council of Dekwaneh backed down and said that he had only made them sign a paper committing them to leave the city, which shows that there was an awareness that what they had done was illegal,” explained Wadih Asmar, president of CLDH.

The elected municipal official defends having undertaken such an action. “We never had anything signed,” he told L'Orient-Le Jour. According to his version, municipal employees went to the homes of Syrians who “crammed several in the same apartment” and “harassed women” in the Beit Abou Chaaya neighborhood, in order to check their papers.

“These Syrians went crazy and threw us out! But I am within my rights, I am a lawyer, I know the law. We do not have the right to expel someone from the city, but it is reported to the competent authorities,” he said.

A more serious incident illustrates the extent of the anti-Syrian rhetoric.

On July 25, residents of Mansourieh blocked the main road after the arrest of a local youth. The latter, the son of a generator owner, allegedly shot at several Syrians after accusing them of illegally connecting to his electricity network.

“I would have done the same in his place,” said William Khoury, president of the Mansourieh municipal council, when contacted by L'Orient-Le Jour.

According to him, this episode illustrates the tensions that have been rising for some time between the locals and the Syrian refugees.

“The problem is that the authorities claim to apply the law in their hate speech, which makes people feel entitled to attack a refugee,” Asmar said.

To avoid “chaos,” the elected municipal official had already taken strict measures before the incident, such as the establishment of a mandatory curfew. The authorities turn a blind eye or encourage such practices, which have no basis in Lebanese law and are illegal under international law. The Beit Mery municipal police patrol the streets daily, prohibit Syrian gatherings in the evening and hunt for mopeds.

The number of Syrian refugees in the municipality has dropped from 1,200 at the beginning of the year to 750 today.

Following the Mansourieh incident, the president of the municipal council even drafted a petition that he circulated in early August to the residents of Beit Mery, with the aim of “organizing the problem of the presence of Syrian refugees.” The document, of which we were able to obtain a copy via the elected official, refers to “the recognized hospitality of the inhabitants of Beit Mery,” warns against certain “security flaws” and gives a kind of blank check to the measures that will be taken.

“We must not lose sight of the fact that the municipal elections are approaching and that some local elected officials are using populist measures,” Asmar said.

The issue of housing rented to several Syrian families in the same area is the one that comes up the most.

“There are unscrupulous landlords who rent their apartments to several Syrian families and take advantage of this money. Ten, 15 people end up sleeping head to toe, and the renters do not declare anything to the municipality,” said Nabil Kahale, chairman of the municipal council of Sin al-Fil.

He said he is “at the end of his rope,” which pushes him to “not be silent anymore.” “These people have taken everything from the Lebanese! But be careful, I am not a racist,” he added.

Roy Abou Chedid, too, defends himself against any accusations of racism. “You can be Syrian and live in my building as long as you are legal,” the municipal councilor of Beit Mery explained.

Some Lebanese believe that Syrian refugees are better off than they are and that they receive fresh dollars from the United Nations High Commission for Refugees. However, contrary to what is believed, they do not receive dollars from this organization and the average monthly income of a refugee family is only LL1,428,763, according to UNHCR.

“It is the Lebanese who are starving, while gasoline or jobs are for the Syrian,” Antoun Chakhtoura, president of the municipal council of Dekwaneh, said.

Because of the economic crisis, access to employment is increasingly a point of contention.

“Syrian refugees accept low wages, so they are a source of competition. They are very hard to work with because there is no job protection. Employers choose them for these reasons,” Asmar explained.

Ahmad*, a Syrian refugee in his 20s, stands in front of the manakish oven where he works in Sin al-Fil. His employer, Marc*, has not heard anything about the measures planned or already taken by some municipalities.

“I can’t find Lebanese people to make deliveries. They complain all day long that there is no work and they are being difficult, but these days, any source of income is good to have, right? If the government ever forced us to hire only Lebanese, we would be forced to raise our prices, or worse, to close down. This system is a snake that bites its own tail,” he said.

* First names have been changed.

Unemployment, banking restrictions, gasoline and bread crises … As Lebanon sinks further into the abyss, the “Syrian,” the “foreigner,” is for some the perfect scapegoat. The presence of one and a half million Syrian refugees in Lebanon is increasingly perceived as a burden, as evidenced by the government’s rhetoric in recent months, which hopes to send up to 15,000 refugees per...