The 2016 agreement between the Lebanese Forces and the Aounist camp left the party with a bitter aftertaste and little appetite for a similar venture in 2022. 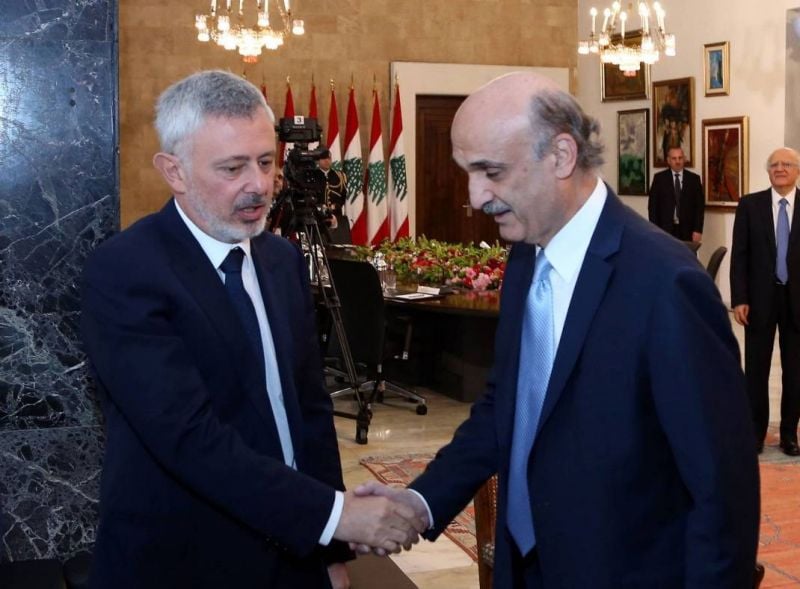 The leader of the Free Patriotic Movement (FPM), Gebran Bassil, remains intransigent in his refusal to endorse the presidential candidacy of the Marada Movement leader Sleiman Frangieh — ostensibly the preferred candidate of both Amal and Hezbollah.

Faced with this dilemma, it appears the two Shiite political parties might now turn to the Lebanese Forces (LF) in a bid to secure the necessary Christian cover to propel Frangieh to Baabda Palace, knowing that the LF and the FPM are the main parliamentary representatives of the country's Christian community.

But convincing LF leader Samir Geagea to support a candidate who stands at the opposite end of his political line is far-fetched.

The relevant question is: How to ensure Frangieh's “Christian legitimacy” even though Marada is represented by only one seat in Parliament — an object of ridicule among his opponents, Bassil in particular?

Could a new Maarab Agreement, like the one that prevailed prior to the election of Michel Aoun, be possible between Geagea and Frangieh?

The current political paralysis has become somewhat reminiscent of the situation between 2014 and 2016, during which both Amal and Hezbollah were keen to block the presidential election until they could impose their choice (Aoun) as head of state.

The same scenario is not likely to be played out this time around.

In 2016, Aoun's ascension to the presidency was made possible thanks to the Maarab Agreement, whereby the LF — although a fierce opponent of Aoun — endorsed his him as president.

The deal provided for an equitable sharing of portfolios in any government between the two main Christian parties — the Lebanese Forces and the Free Patriotic Movement — and the head of state.

The agreement also included political terms including “support for the Lebanese Army as the sole authority of the state throughout the country,” in reference to Hezbollah and its weapons, and “the prohibition of using Lebanon as a point of departure for weapons and fighters. ”

The deal also stressed “the need for an independent foreign policy that preserves the country's interest.”

However, nothing of what was agreed upon was implemented, prompting the LF to withdraw from the partnership—much to Geagea's dismay.

In fact, as a result of the deal, Geagea continues to be reproached among the Christian community for having participated in a presidential compromise that allowed the election of a Hezbollah ally.

In the aftermath of the Oct. 17, 2019 popular uprising, the LF changed its strategy, presenting itself as the spearhead of the opposition to Hezbollah and the Aounist camp.

In January, Geagea said it was “impossible for a new Maarab Agreement to be concluded to bring Gebran Bassil to the presidency,” adding that the FPM and Hezbollah have “led the Lebanese into hell.”

Yet today, a rapprochement between the LF and the Marada seems more plausible than with the FPM.

This is particularly true given that, in 2018, Geagea and Frangieh buried the hatchet during a historic reconciliation sponsored by Bkirki.

The origins of the adversity, even animosity, between the two formations date back to the dark days of the beginning of the civil war— more precisely to the assassination of Tony Frangieh, Sleiman's father, and his family in Ehden in 1978, in the context of the conflict that pitted the Marada against the Kataeb party. At the time, Geagea was a military member of the Kataeb.

“We have a much better chance of reaching an agreement with Samir Geagea on the subject of the presidential election than with Gebran Bassil,” a source close to Frangieh told L'Orient-Le Jour on condition of anonymity, given the sensitivity of the issue.

The source added that such an arrangement can only be possible if there is an international green light for the election of Frangieh as president. This would include a Saudi-American agreement and pressure from Riyadh, of whom the LF is the main ally in Lebanon.

Saudi Arabia also has a less problematic relationship with Frangieh than with the Aounist camp.

Parliament Speaker Nabih Berri, who says he is ready to support any form of dialogue to unblock the presidential election paralysis, could potentially step in to push for such a rapprochement, particularly he calls Frangieh his “eternal candidate.”

“Berri will leave no stone unturned to support Sleiman Frangieh and ensure him Christian cover,” a source close to the speaker told L'Orient-Le Jour on condition of anonymity.

“But at the same time, [Berri] does not have the means to push Samir Geagea to cave in. He specifically wants relations with the LF to remain stable, notably, after the tension that followed the Tayoune clashes,” the source added, referencing the clashes that broke out between Hezbollah and Amal supporters and armed men allegedly belonging to the Lebanese Forces in October 2021.

The LF, however, does not share the same viewpoint. Geagea's party is well aware that any new agreement with the opposing camp would be, this time, unforgivable in the eyes of its popular base.

“Our support for Michel Moawad, the opposition candidate, remains unquestionable for now,” LF spokesman Charles Jabbour told L'Orient-Le Jour. “We continue to refuse to endorse any March 8 candidate, whatever the conditions or benefits are dangled before us.”

These positions, however, could change depending on ongoing negotiations.

The election of Moawad — whom Hezbollah considers a “defiant figure” — or any other candidate who is not the result of a political compromise, is an almost impossible task in a Parliament where no party holds an absolute majority.

The Lebanese Forces are aware of this.

Why else would the party give Frangieh — and, therefore, Hezbollah and Amal — the opportunity to secure a quorum if the opposing camp could agree on a candidate?

In an interview with the al-Jadeed channel two weeks ago, Geagea implied that his party would not boycott the Parliament session if there was agreement on a candidate from the March 8 camp.

“We have said that we will not block the election indefinitely. For the simple reason that we do not want to adopt the same policy of obstruction that prevailed before the election of Michel Aoun,” Jabbour told L'Orient-Le Jour.

“The LF intends to stay away from Parliament for two or three sessions in hopes of improving their chances against the rival camp, but not more,” he said, adding that “it will be a tactical abstention.”

For the LF, the rumors circulating on a possible agreement with the Marada leader are “blackmail” carried out by the March 8 camp — specifically Hezbollah and Amal — in a bid to make Bassil bend, according to Jabbour.

It is from this perspective that the Lebanese Forces interpreted the leaks on the meeting between army chief Gen. Joseph Aoun and the head of Hezbollah's coordination committee, Wafif Safa, even though the meeting did not touch on the presidential election.

The meeting itself was enough to make Gebran Bassil worried. The FPM leader wants the army chief, another major presidential contender, away from the political arena.

The meeting between Bkirki and Hezbollah on possible ways out of the impasse should be interpreted along the same lines.

“The message is clear: [the meeting] was to tell Gebran Bassil that there are other options than him to get Sleiman Frangieh or Joseph Aoun to Baabda,” Jabbour said.

The leader of the Free Patriotic Movement (FPM), Gebran Bassil, remains intransigent in his refusal to endorse the presidential candidacy of the Marada Movement leader Sleiman Frangieh — ostensibly the preferred candidate of both Amal and Hezbollah.Faced with this dilemma, it appears the two Shiite political parties might now turn to the Lebanese Forces (LF) in a bid to secure the necessary...