Here’s what happened over the weekend and what to expect today, Tuesday, Aug. 16 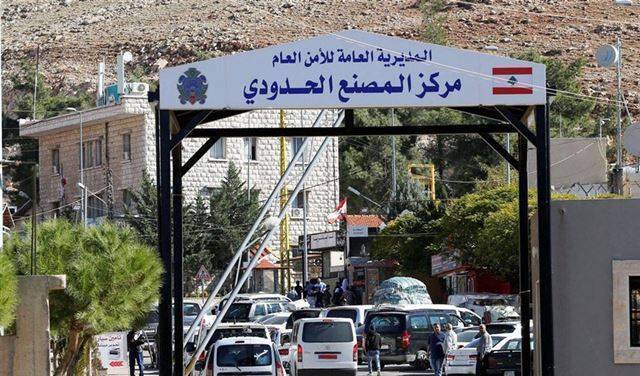 A line of cars at the Masnaa border crossing between Lebanon and Syria. (Credit: NNA)

Hadi Matar, whose family hails from Lebanon and who is accused of attacking author Salman Rushdie in New York state on Friday, pleaded not guilty on Sunday. South Lebanon village Yaroun’s mayor said that Matar’s parents originated there but that the alleged attacker was “born, studied and lived in the United States." Lebanese journalist Dima Sadek, who was previously targeted in social media hate campaigns, faced backlash after tweeting about the affair and said she was “the subject of a public incitement to murder campaign launched by Jawad Nasrallah,” Hezbollah head Hassan Nasrallah’s son, while the party refused to give any official comment about the attack on the author. Matar is accused of acting on a fatwa, or religious edict, issued in 1989 by Iran’s then-Supreme Leader Ayatollah Ruhollah Khomeini calling on Muslims to kill Rushdie and anyone involved in the publication of the book, The Satanic Verses, for blasphemy. The Iranian Foreign Ministry denied any connection to the attack in a statement issued Monday, instead blaming “[Rushdie] and his supporters” for creating the conditions that led to the assault. Rushdie, who was stabbed at least 10 times in the face, neck and abdomen, has reportedly been taken off a ventilator and can talk again; however, his injuries are described as life-changing.

Lebanese Transport Minister Ali Hamieh issued a statement yesterday in response to the interception of a Middle East Airlines civilian aircraft by Greek fighter jets on Aug. 10. “Two Greek air force planes approached the aircraft and contacted its crew to inquire about any possible emergency. When they received a negative response, the pilot of one of the Greek fighter planes greeted the Lebanese aircraft and let it continue its trajectory," Hamieh said, but offered no details on what caused the jets to approach the MEA passenger plan. Meanwhile, a Greek news outlet reported that “Two F-16 fighter jets took off from the Souda (Crete) base and approached the civilian plane over Argolis," noting that the intervention occurred after the Middle East Airlines Airbus A321, which was carrying 145 passengers, reportedly failed to respond to calls from air traffic control authorities.

Relatives of Federal Bank hostage taker Bassam al-Sheikh Hussein protested his arrest on Friday. Hussein is currently in custody after turning himself in, having been guaranteed “he would be released on the same day,” following a six-hour standoff Thursday instigated in an attempt to forcibly withdraw funds from the bank, which, according to the Depositors’ Union, aimed to cover medical expenses for his father and son. A crowd had formed in front of the bank Thursday as activists and depositors’ groups rallied in solidarity with Hussein. The bank is set to reopen today after closing all branches on Friday, while its lawyer told L’Orient Today that it will take “the appropriate measures and decisions” concerning the incident, without providing any further details.

Syrian officials endorsed plans to repatriate refugees while receiving a delegation headed by Lebanese Minister for Displaced Persons Issam Charafeddine. “The doors are wide open for a return of Syrian refugees,” Syrian Minister of Local Administration and Environment Hussein Makhlouf said during talks with Charafeddine. Several municipalities in Lebanon have implemented discriminatory measures against Syrians, and human rights groups and refugees say pressure on the refugees in the form of restrictive local regulations, army raids on camps and, in some cases, deportation, has intensified. Lebanese officials recently touted a plan to repatriate 15,000 Syrian refugees each month, prompting criticism from the United Nations High Commissioner on Refugees, while some partook in anti-refugee rhetoric, notably caretaker Economy Minister Amin Salam’s claim that they were responsible for the bread crisis. Salam and others also posited the smuggling of subsidized goods to Syria as a source of the bread crisis. Despite Lebanese security forces’ efforts, the border with Syria remains porous and cross-border smuggling is prolific. A Lebanese soldier was killed and another injured in armed clashes with traffickers on the northern border with Syria over the weekend, the army said in a tweet on Saturday evening, to which Free Patriotic Movement head Gebran Bassil responded with calls to end smuggling and tighten border security.

President Michel Aoun, caretaker Prime Minister Najib Mikati and caretaker Labor Minister Mustafa Bayram signed a decree Friday setting the private sector transportation allowance at LL95,000, a LL30,000 increase. The same day, the Energy Ministry lowered the price of 20 liters of 95-octane gasoline by LL16,000, bringing its price to LL552,000, and 20 liters of diesel by LL21,000, making it LL637,000. Meanwhile, it increased the price of a cylinder of household gas by LL8,000 to LL312,000. The price lists issued by the ministry have been an attempt to regulate fuel prices after the gradual removal of subsidies, following a summer 12 months ago marked by hours-long queues at gas stations and widespread fuel shortages. However, as prices fluctuated, Gas Station Owners’ Syndicate spokesperson George Brax said in January that station owners were losing on each sale “due to the difference in the exchange rate between the dollar they buy from the markets [set at LL30,000] and that calculated in the current [government] price installation table.” Banque du Liban announced in late July that fuel importers would need to supply 15 percent of the US dollars paid to import gasoline at the parallel market rate, and the remainder at the government currency exchange platform, Sayrafa, rate. Meanwhile, renewed queues were seen at gas stations Monday night.

In case you missed it, here’s our must-read story from over the weekend: “While refugee return plan flounders, Syrians in Lebanon face deportation risk”

Want to get the Morning Brief by email? Click here to sign up.Hadi Matar, whose family hails from Lebanon and who is accused of attacking author Salman Rushdie in New York state on Friday, pleaded not guilty on Sunday. South Lebanon village Yaroun’s mayor said that Matar’s parents originated there but that the alleged attacker was “born, studied and lived in the United States." Lebanese...