In a cruel twist of fate, four more silos collapse on the second anniversary of Beirut port explosion 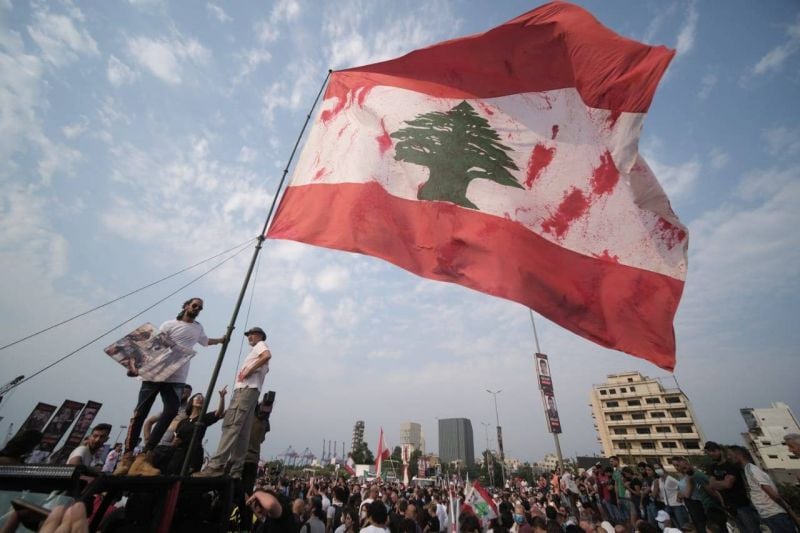 Protesters gather near the Beirut port on the two-year anniversary of the Aug. 4, 2020 port explosion. (Credit: João Sousa/L'Orient Today)

BEIRUT — Adding insult to injury on an already traumatic day, four more silos in the northern section of the Beirut port silos collapsed on the second anniversary of the devastating Aug. 4 explosion, as hundreds took to the streets in at least three different marches to demand justice for the victims of one of the largest non-nuclear explosions in history.

The further collapse of the formerly unremarkable structure, which was both feared and bitterly predicted by many, came after part of the heavily damaged grain silos at the port fell down on Sunday, with experts subsequently warning that another section of the silos could collapse "anytime." In total, eight silos have now fallen. Prior to the collapse, a series of fires had broken out in the silos in recent weeks, further undermining structures already weakened by the blast.

The blast on Aug. 4, 2020, caused by hundreds of tonnes of haphazardly stored ammonium nitrate, inadvertently turned the previously humdrum grain silos into an unlikely hero, as they shielded west Beirut from the devastating fate that befell its eastern side, adjacent to the port.

While some see the silos as the ultimate reminder of an agonizing day, others, including many of the family members of the victims, insist that keeping them intact is needed to ensure justice is served, as they may contain evidence of the blast. Many also believe that the silos are, and should remain, the ultimate reminder of the country’s corrupt class and should therefore serve as a place of commemoration of both the tragedy and those responsible for it.

Tracy Naggear, the mother of three-year-old Alexandra, one of the youngest victims of the blast, told L'Orient Today that she “doubts the collapse of the silos today, at this exact hour, happened by itself.”

The family lives very close to the silos, and she can see them from her window every morning, she said.

“They are the silent witness,” she said, adding that the fires at the port "have been burning for three weeks now and [authorities] failed to do anything about it.” 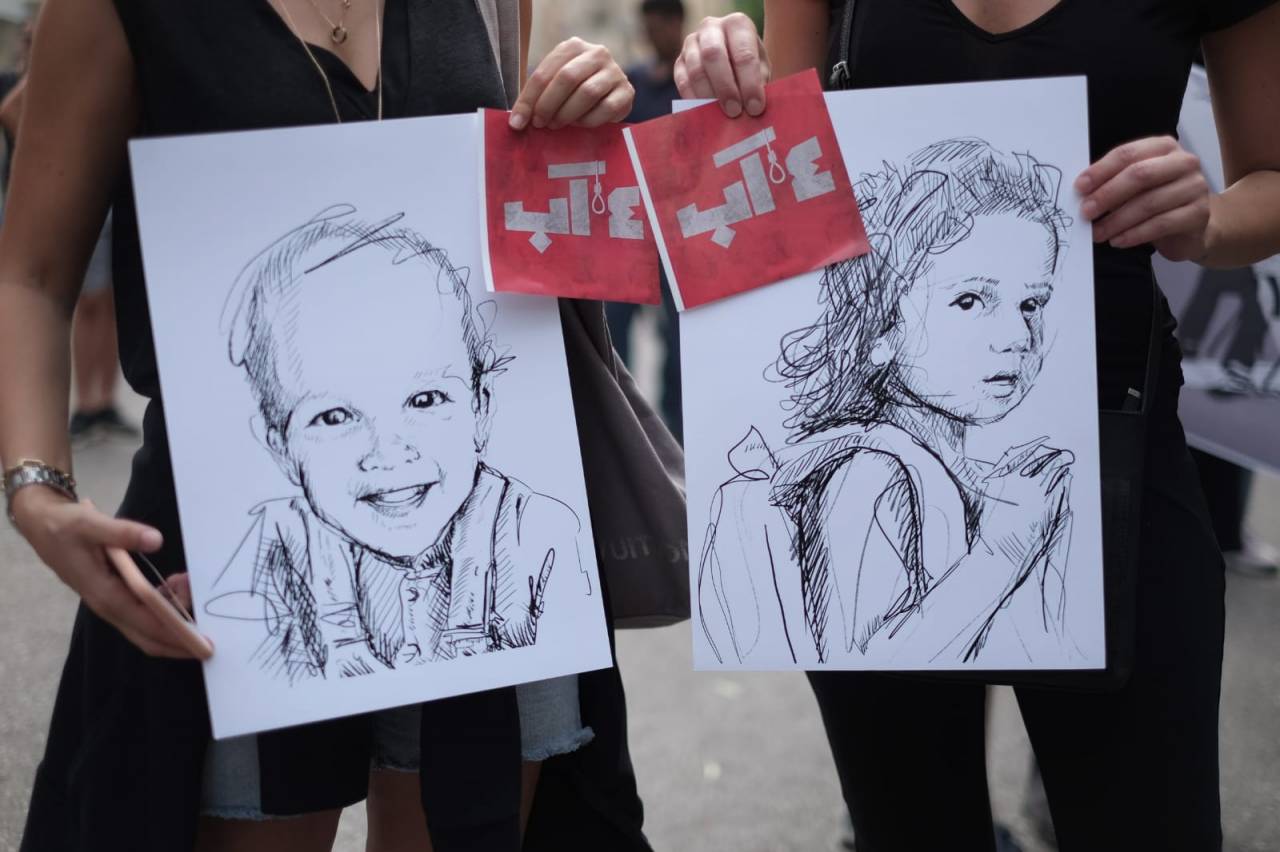 Starting late in the afternoon, on an usually gloomy summer day, hundreds of protesters gathered at the Justice Palace, the Annahar newspaper building and the fire station in Karantina (from which ten firefighters were sent to their deaths on the fateful day two years earlier) with the intention to converge at the Statue of the Emigrant next to the port.

Passing by the French embassy en route from the Justice Palace, some protesters held red ribbons, distributed by the families of victims, to wear over their eyes “as a symbol to tell France to stop being blinded and allow an international investigation to start,” one organizer told L’Orient Today.

Aya Majzoub, Human Rights Watch’s researcher for Lebanon, accused France of stalling in the face of requests for an international investigation into the port blast.

“In all our talks with international countries concerning an international fact-finding mission, they all said that we want a green light from France, but until now France has been standing in the face of families of victims,” Mazjoub said. “Macron has not fulfilled his promises to follow up on the investigation.”

Meanwhile, around 300 people accompanied by a scouts band gathered in front of the firefighter's station in Karantina, where they unfurled a large Lebanese flag on which signatures were scribbled to later present to UN Secretary General Anthony Gutierres, in order to call for an international investigation.

“I'm not only here because I lost a family member but also as a citizen. I cannot believe that the same corrupted politicians are back. This is plain indecency — we’re here today to avoid a new catastrophic event and more deaths in this country,” Jihad Noun, a relative of firefighter Joe Noun, who was killed in the blast, told L’Orient Today from the protest at the firefighters’ station.

Victim Nicole Helou’s father, Majeed, who joined the protest near the Annahar building, said, “One word, we want justice... All the hot air they’re making now is not justice. It’s a regime without justice. If there’s no independent judiciary, there’s no justice. …From the day that Lebanon was born, we haven’t seen one official held accountable. They all need to be held accountable, the big ones and small ones.”

Ajwad Chaya, father of victim army soldier Jawad Chaya, carrying a photo of his late son and a noose symbolically intended for the political class, said, “They’re all corrupt, everyone from the President to the lowest security [forces] member. All of them are accused until proven innocent, we’re going to continue to trail the perpetrators until we hang them on this noose. ” 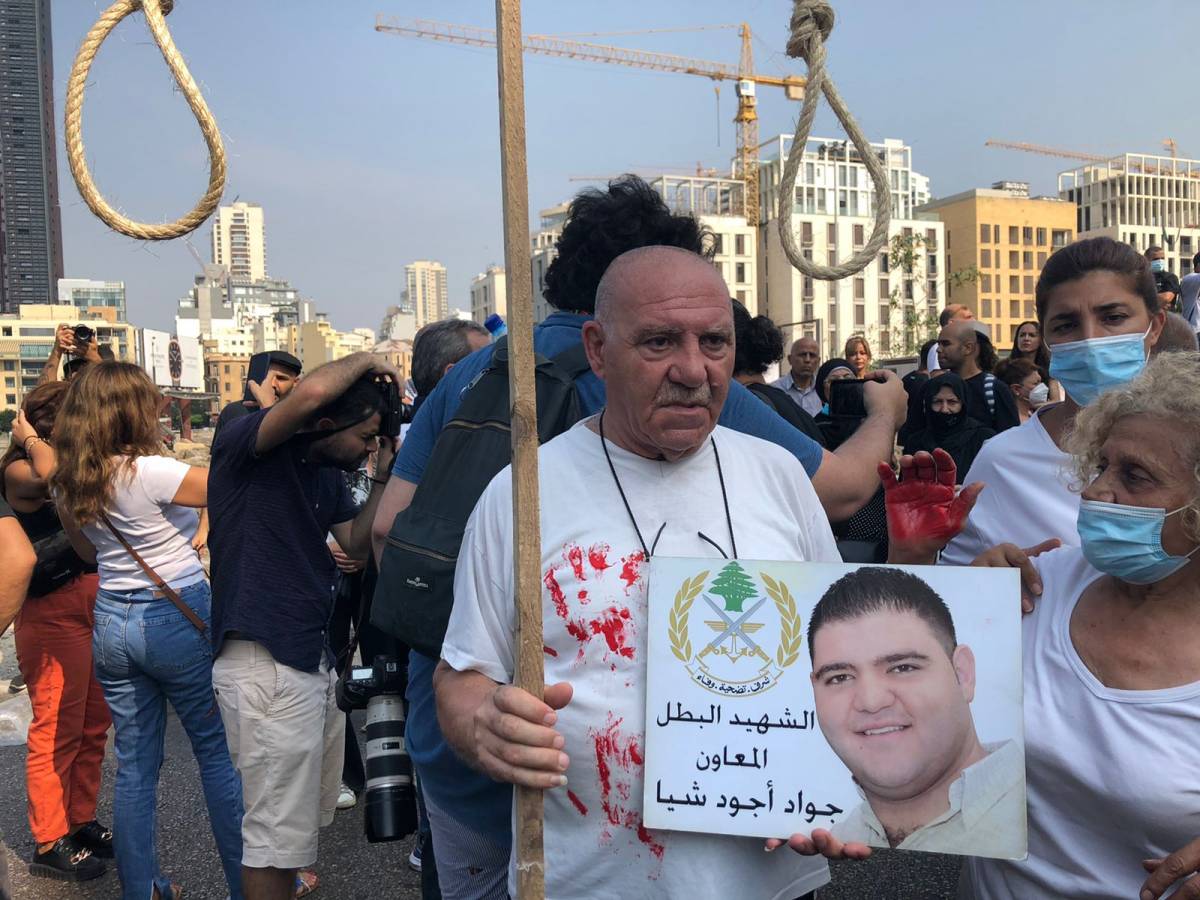 Meanwhile, Sarah Copland, mother of two-year-old Isaac, the youngest victim of the blast, wrote on Twitter, "Never in a million years did I imagine Isaac to become known in this way. But I am grateful to the Lebanese people who have adopted him as one of their own and always remember him."

Scuffles briefly broke out between protesters and security forces in front of the Parliament building downtown, where L'Orient Today correspondents reported hearing shots fired of what appeared to be rubber bullets. Meanwhile, family members of the port explosion victims urged the crowd to calm down over loudspeakers and called for protesters to go to the Emigrant Statue next to the port rather than further attempting to breach the Parliament.

The crowd heeded the call as, soon afterwards, calm had returned to the area while more people started gathering at the port.

Meanwhile, a splinter group representing the relatives of the victims of the Beirut port blast gathered for a separate protest in front of gate three of the port. Ibrahim Hoteit, a spokesperson for the group, said that he has documents that prove that Judge Tarek Bitar is “not doing his job right.” He blamed the United Nations Interim Force in Lebanon (UNIFIL), which he said was patrolling off the coast near the port of Beirut, for allowing the ammonium nitrate to reach the port, as well as the Lebanese Army and its commander-in-chief at the time, General Jean Kahwaji.

Elsewhere, around 5 p.m., Paul Naggear, father of three-year-old port blast victim Alexandra and one of the most visible representatives of the main group of victims’ families, began to speak.

“We as a family were at home in Gemmayzeh. At 6:05 we were still living normally, as everyone does. At 6:08 we didn’t have a home, Alexandra’s head was broken, Tracy’s back was broken,” he said. 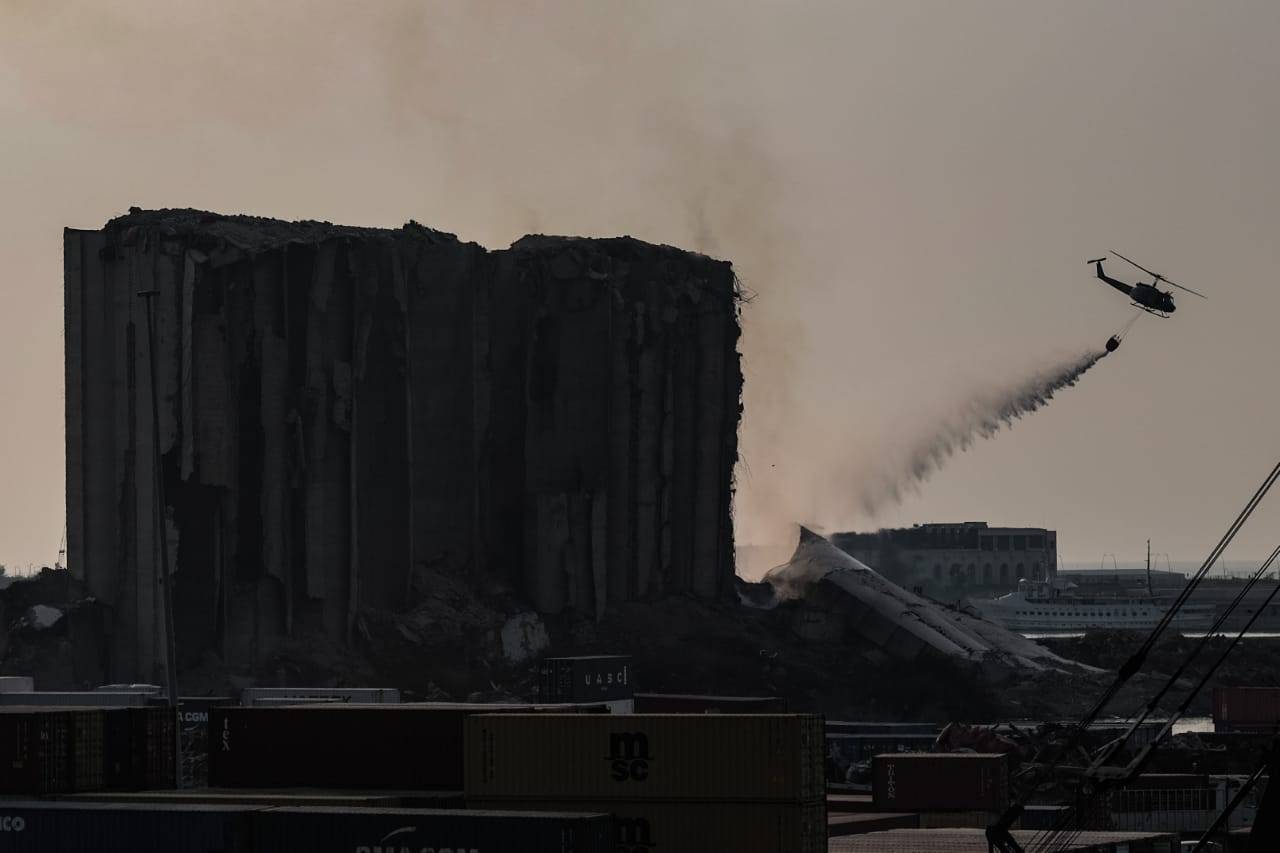 A helicopter douses the port with water following the collapse of four more silos on Aug. 4 , 2022. (Credit: João Sousa/L'Orient Today)

In a display of cruel irony, an additional section of the silos collapsed abruptly as he was speaking, sending up a massive cloud of dust. A woman whose daughter had died in the explosion began to cry.

Mahmoud Al-Zahed, 36, brother of Amin Al-Zahed who died while working at the port on Aug. 4, said he believes that “the collapse of the silos is intentional from the authorities so they prevent the protestors from approaching this area today.” He added that the authorities had not made any effort to reinforce the structure.

Images of the collapsing structure, shrouded in heavy clouds reminiscent of the explosion itself, spread like wildfire on social media, eliciting comments oscillating between disbelief and anger, while on the ground, the reaction was relatively muted. A Lebanese Army spokesperson told L'Orient Today that the army had already evacuated a 500-meter radius around the port and would not take additional steps to evacuate a wider area following the silos' collapse.

“Forces of Change” MP Melhem Khalaf blamed the "authorities" for not taking action to prevent the silos’ collapse. “They let them burn for four weeks, since July 7, and didn't do anything," he said. "They should have put the fire out and done something so that the silos don’t collapse.” He added that the moment when the silos fell on Thursday felt like “history repeating itself.”

The crowd at the port waited for the clock to strike 6:07 p.m., marking the exact moment two years ago when the explosion destroyed swaths of the city, to have a moment of silence for the victims.

Afterwards, a hovering helicopter was seen dousing the port silos with water. A Civil Defense source told L'Orient Today that four silos had collapsed and that it was not clear whether more might be in danger of immediately collapsing.

BEIRUT — Adding insult to injury on an already traumatic day, four more silos in the northern section of the Beirut port silos collapsed on the second anniversary of the devastating Aug. 4 explosion, as hundreds took to the streets in at least three different marches to demand justice for the victims of one of the largest non-nuclear explosions in history.The further collapse of the formerly...