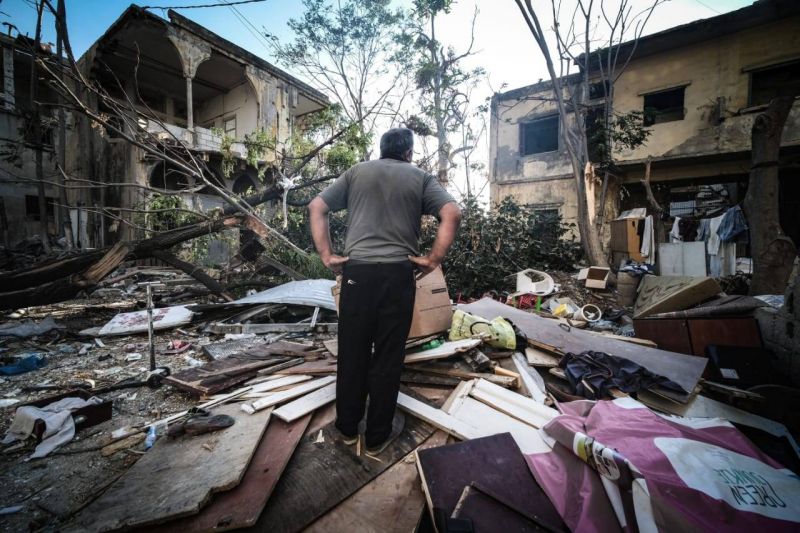 BEIRUT — “What will happen to us that is worse than what happened to us on Aug. 4?”

Many people living or operating businesses in the neighborhoods close to the Beirut port — the carpenter in Karantina, the grocery store owner two streets away, the homemaker in Mar Mikhael — gave variations on this reply when asked if they are concerned about the collapse of a portion of the massive grain silos at the port.

Heavily damaged, first by the massive blast on Aug. 4, 2020 and then by a series of fires over the past few weeks, four out of 16 silos in the northern block collapsed Sunday evening. French engineer Emmanuel Durand, who volunteered for a government-commissioned team of experts and who has been using sensors to monitor shifts in the structure, told L’Orient Today that the remaining silos in the block continue to tilt at a rate requiring “minute to minute” monitoring. The expert reassured that for now the “south block is stable.”

The Environment and Health Ministries last week warned of potential health repercussions from air contamination in the event of a collapse. Officials distributed KN95 masks in the areas around the port and advised residents to close their windows.

But many residents greeted the warnings with a shrug.

Seventy-four-year-old carpenter and Karantina resident Shafeek Assaf told L’Orient Today that the Lebanese Red Cross had distributed masks Saturday which he, along with his family, did not wear.

“I just don’t think it’s that dangerous, especially when we have experienced much more dangerous events in Lebanon,” he said.

Assaf, who lives around 50 meters from the Beirut port entrance and owns a carpentry workshop in Karantina, said he did not leave the area during the recurrent fires and partial collapse of the silos, nor will he in case more silos collapse. He said that he will keep his business open for the time being, although business is slow due to the economic crisis.

Walid al-Kassem, 53, who lives in Karantina with his daughter and owns a mini market, said, “Where can we go? We have no other option. We have no other place to go.” He noted that he had seen “a little bit of dust Sunday but wasn’t scared,” adding that “after an explosion this big, I can’t be scared of something like that.”

Kassem broke into tears suddenly before he continued, “We are alive only because we haven’t died yet.”

He, like many of the people interviewed, blames the politicians for the silos’ collapse and for the fires that were burning at the site for three weeks before Sunday’s partial collapse.

Experts and officials have said that the repeated outbreaks of fire at the port silos are due to wheat fermentation.

“They could have put the fire out… it’s all on purpose so that the silos collapse and the crime scene is wiped clean,” Kassem said.

For Naseem Abi Aad, the manager of the 92-year-old Kassab ice-cream shop in Gemmayzeh, the fact that the government has been incapable of putting out the fire at the Beirut grain silos is “a joke.”

Abi Aad, who used to work with the Lebanese Civil Defense, accused the government of “attempting to erase the crime evidence.”

Authorities and experts had said that the use of water would only aggravate the fire at the silos, stating that the only solution would be to wait for the fire to extinguish naturally.

“Instead of water, there are other chemicals and tools that can be used to extinguish a fire,” Abi Aad said.

Abi Aad added that he will close the shop on Thursday as the wife of the shop owner, a relative of his, had died in the blast — while visiting her ill mother at St. George Hospital, commonly known as Mustashfa Roum — but said that he will not necessarily join the organized march.

Distrust of the government extends not only to its response to the fires but to the official warnings of potential health hazards due to the silos’ collapse.

Ghassan Zaytoon, 59, who runs a hardware store in Gemmayzeh, an area less than 800 meters from the port, told L’Orient Today that he did not see any dust on Sunday, following the silos partial collapse.

“They are fooling people about the severity of what’s happening and about the toxins that might spread… so that they can lock people inside their homes, preventing them from protesting,” Zaytoon said, claiming that the authorities “are scared people would react to the silos’ collapse.”

He added that markets in the area remained open Sunday, including his shop, saying that there was a sense of normalcy. “No one was wearing any masks, nothing, and after around one hour, the street was crowded with bar-goers and life was normal.”

Zaytoon, who will close his shop on the two-year blast anniversary and join the march scheduled for Thursday, believes that the silos should be demolished if that’s the only option at hand, but only after the judiciary unveils the truth about the blast.

“After they tell us who’s responsible for the blast they can demolish the silos and perhaps build something like a martyrs’ statue in its place,” he said.

In case more silos collapse, “the most extreme measure I would take is to close the windows and stay indoors but my family and I did not think about temporarily leaving [the area],” said 62-year-old Saida Karam, a resident of Mar Mikhael, the neighborhood adjacent to Gemmayzeh. She told L’Orient Today that “the only dust I saw was on TV when I checked the news.”

BEIRUT — “What will happen to us that is worse than what happened to us on Aug. 4?” Many people living or operating businesses in the neighborhoods close to the Beirut port — the carpenter in Karantina, the grocery store owner two streets away, the homemaker in Mar Mikhael — gave variations on this reply when asked if they are concerned about the collapse of a portion of the massive...

Burned alive, allegedly by her husband, Hanaa Khodr succumbed to her injuries