BEIRUT — Liliane Cheaito's scratchy, labored breathing went on until a nurse appeared at her hospital bed, where the 28-year-old has spent nearly every moment of the last two years in silent suffering following the Beirut port explosion of 2020.

But the quiet halls of the American University of Beirut's Medical Center — where she has lived since the Aug. 4, 2020 blast — have not shielded her from Lebanon's collapse.

Instead, Cheaito and her family are trapped in their country's multiple crises — from a deteriorating health sector that can no longer treat her to paralyzed government institutions and zombified banks that have frozen her family out of their savings.

"Liliane represents the agony of the Lebanese people because she's suffering from all of this," her older sister Nassma told Reuters. 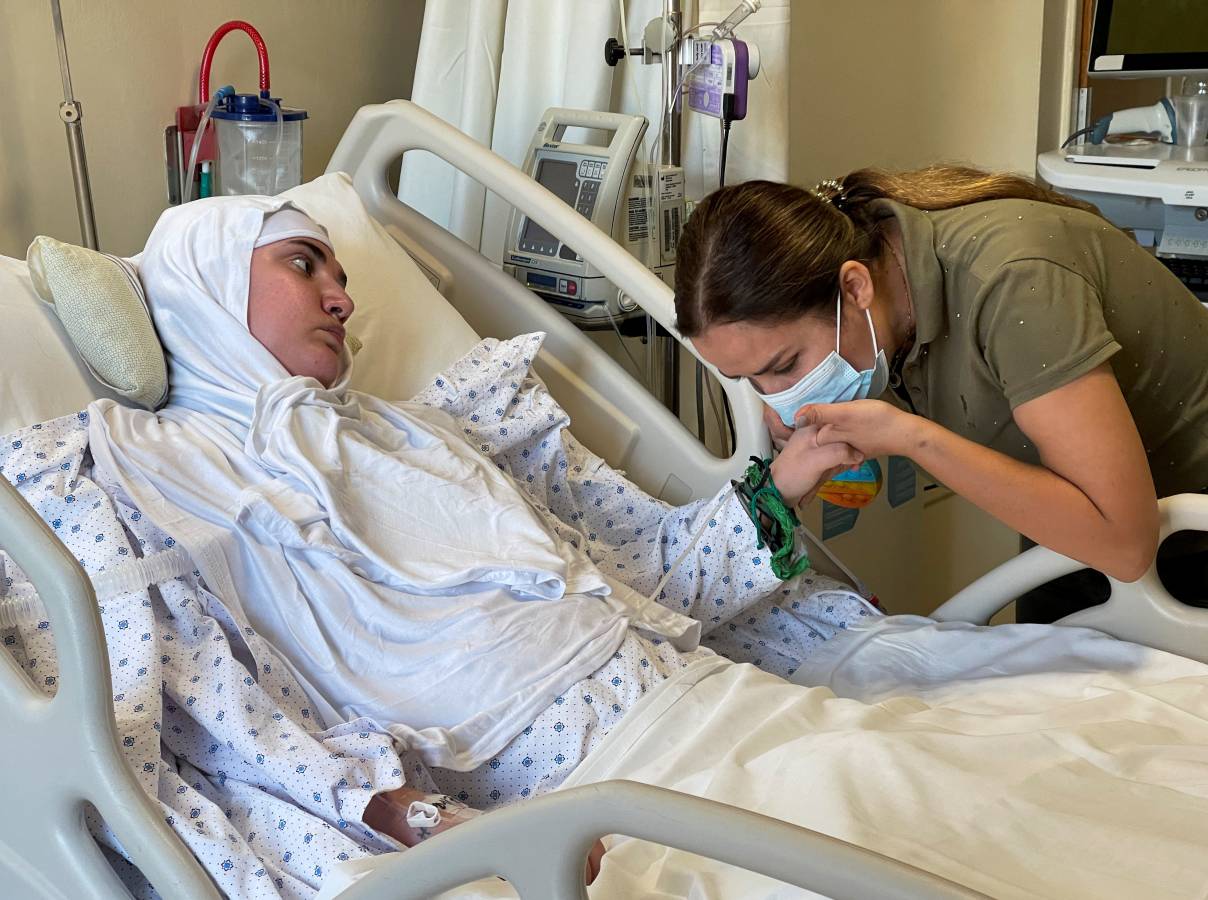 Nassma Cheaito, kisses the hand of her sister, Liliane Cheaito who is mostly paralyzed from August 2020 Beirut port blast, as she lies on hospital bed at the American University of Beirut Medical Center (AUBMC) in Beirut, Lebanon July 26, 2022. (REUTERS/Issam Abdallah)

She sustained severe damage to her frontal brain lobes that left her in a months-long coma and required three surgeries.

In July, she uttered her first word in nearly two years — "mama" — understood by her siblings to be a cry for her toddler Ali, whom she has not seen since the explosion due to a custody dispute with her husband.

Cheaito remains mostly paralyzed. She communicates by squeezing her eyes shut in affirmation or turning her bandaged head away slowly in denial.

On good days she can manage a shaky wave with her left hand, linked to an intravenous drip with a half-dozen drugs.

They include pain medications and a treatment for epilepsy that her sisters say is not available in Lebanon, where a three-year financial meltdown has hampered imports of many medicines.

Her sisters ask friends and acquaintances coming in from abroad to bring the medications, paying for them in US dollars that are hard to access as Lebanon's currency continues its devaluation.

Cheaito's room on the ninth floor is stuffy, a small fan unable to clear the summer humidity. Like many homes and offices across Lebanon struggling to cope with cuts in the state grid and skyrocketing fuel prices, the hospital has been rationing its private diesel supply by limiting the hours of central air conditioning.

But she will not be there much longer. 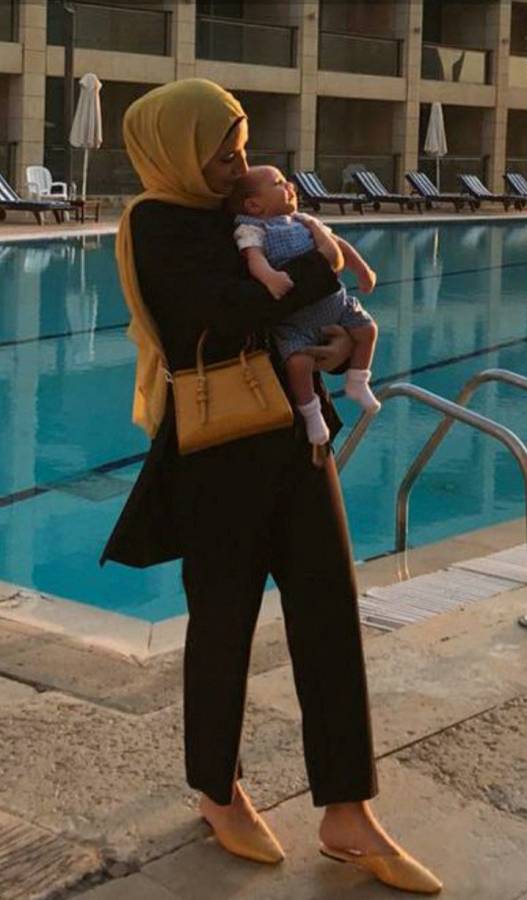 Liliane Cheaito holds her son in this undated handout picture said to be taken before the August 2020 Beirut port blast and obtained by Reuters from her family in Lebanon. (Nassma Cheaito/Handout via REUTERS)

AUB Medical Center informed the family in February that the in-house charity group covering the costs of Cheaito's stay could no longer afford to do so, and that she would have to move to a specialized rehabilitation center to pursue her treatment.

"Those special centers are asking for money, and unfortunately we can't afford it — not even part of it — because our money is in the banks," said Nassma.

Their older sister Nawal has around $20,000 saved in a US-dollar currency account at Bank Audi that she wants to use on a treatment for Liliane.

But since the financial crisis took hold in 2019, many of Lebanon's banks have frozen clients out of their hard currency through informal capital controls.

They cap monthly cash withdrawals in US dollars and allow other limited amounts to be withdrawn in Lebanese liras at a rate much lower than the parallel market rate.

The banks say the restrictions prevent banking runs, but critics say they do not apply to the rich and powerful.

Successive governments have left the financial collapse to fester even as it has impoverished the bulk of the population. 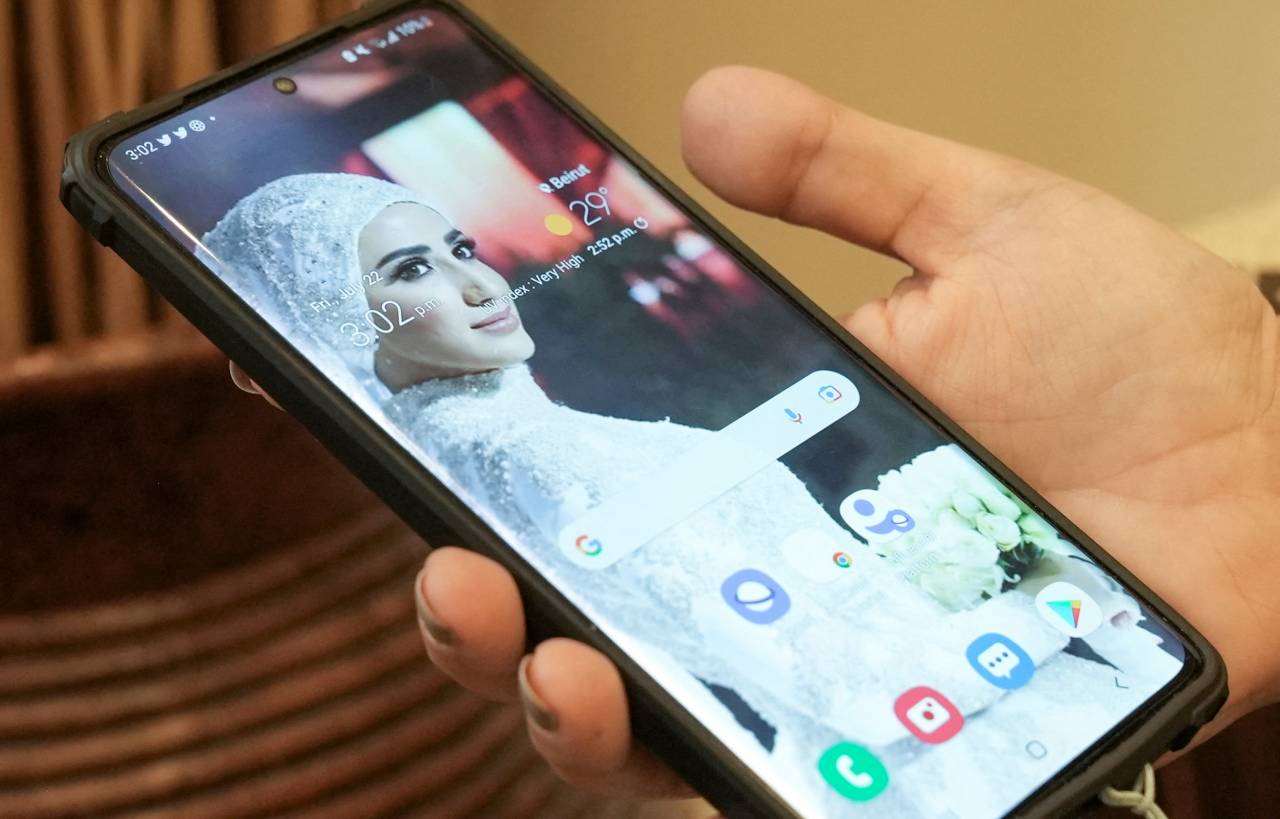 The vested interests of ruling factions — which managed to preserve their grip on power in a May election — are widely blamed for obstructing solutions.

Cheaito's family and their lawyer claim the restrictions are hampering her recovery as withdrawing the funds at the bank's lower rate would slash their worth.

It would ultimately represent an informal haircut of more than 80 percent, said Fouad Debs, co-founder of the Lebanese Depositors' Union.

"Nawal has saved money, and now she needs the money to spend on Liliane but the bank...is not letting Nawal withdraw the money," Debs told Reuters.

In response to emailed questions from Reuters, a Bank Audi spokesperson said: "Restrictions are imposed by the Lebanese systemic crisis, not by Bank Audi."

The spokesperson said the bank was generally keen to provide "exceptional support" including to pay for medical care and said it "never refrained from providing [Cheaito] any support it can," but did not say whether it had specifically allowed exceptional withdrawals for her family to pay for her care.

The depositor's union has filed more than 350 lawsuits against Lebanese banks over the last three years, most of them by clients seeking unrestrained access to their savings for school tuition or healthcare.

Some clients have won but many have yet to receive a ruling. Debs said Cheaito's case would be "one of the most desperate" — if only they could file the complaint.

In another example of how Lebanon's meltdowns have impacted Cheaito, an open-ended strike in the court system means the union has been unable to file a complaint against Bank Audi for the last month.

"It's a reflection of the collapse of the whole system," Debs said.

BEIRUT — Liliane Cheaito's scratchy,
labored breathing went on until a nurse appeared at her
hospital bed, where the 28-year-old has spent nearly every
moment of the last two years in silent suffering following the
Beirut port explosion of 2020.
Using a suctioning machine, the nurse emptied her lungs of
built-up phlegm and Cheaito's heaving chest finally...

A year after the Tleil fuel tank blast, the death penalty is sought for two men accused of starting fire