Here’s what happened yesterday and what to expect today, Friday, July 16, and this weekend. 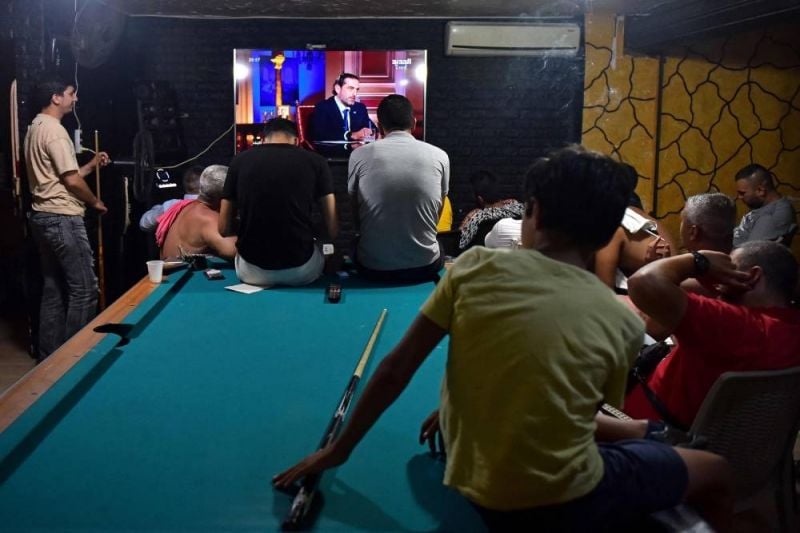 People gather to watch a televised interview with Saad Hariri hours after he stepped down from the role of premier-designate. (Credit: AFP)

Saad Hariri gave up the role of prime minister-designate yesterday after nearly nine months of failing to agree with President Michel Aoun on the formation of a cabinet. Following a 20-minute meeting, Hariri said from Baabda Palace, “President Aoun demanded amendments that I considered to be substantial in the cabinet lineup.” In an interview with Al Jadeed later Thursday night, Hariri accused Aoun of continuing to vie for a “blocking third” veto power in the cabinet. He also said the president all but guaranteed that the Free Patriotic Movement, Lebanon’s largest Christian party, which Aoun founded, would refuse to vote to give Hariri’s cabinet confidence. Aoun, for his part, said Hariri had proposed a list of ministers with no intention of negotiating and that his unwillingness to discuss changes indicated that Hariri had already made up his mind to step down. Aoun said he would soon call for parliamentary consultations to select a new premier-designate. Although Hariri told Al Jadeed that his Future Movement, the country’s largest Sunni party, would not nominate a candidate, he said the party would be open to giving a cabinet confidence should it be deemed competent.

Scattered protests broke out and the lira seemed set to slide as Hariri’s resignation plunged the country into greater depths of uncertainty. Money changers looked to capitalize on the lira’s volatility, buying dollars at a low rate and holding on to them in preparation to sell them when the market opens today, anticipating that the lira may be trading at LL21,000 or even higher. Meanwhile, roadblocks sprang up in several Beirut areas, including Ras al-Nabeh, Beshara Khoury and Mazraa, while shops, supermarkets and restaurants in Sur closed and protesters set fire to garbage cans in Saida’s main Martyrs’ Square. A protester at a roadblock in Beirut’s Beshara Khoury told L'Orient Today that he had been hopeful Hariri would succeed in forming a government this week, “but when Hariri resigned, the lira rate [plummeted].” Now, he said, “we can’t even buy milk for our children, and there’s no Panadol in the pharmacies.”

Pharmacists will resume an open-ended strike today after the Health Ministry failed to provide a list of subsidized medications. Speaking with L’Orient Today, several pharmacists said they would close their doors on Friday after the ministry’s repeated failure to provide a list of drugs that it will continue to subsidize. The pharmacists’ syndicate had initially set Tuesday as the deadline for receiving the list, but the ministry had asked for a two-day extension. “Even after two [more] days the ministry did not fulfill its promise, which is problematic for pharmacists who are confused on what rates to sell their medicines,” a source said. The head of the pharmacies’ syndicate, Ghassan Al-Amin, told L’Orient Today that the protest was a grassroots initiative organized by pharmacists who have tired of prolonged medicine shortages, and that the syndicate had not officially organized the protests. Pharmacy shutdowns have become a regular occurrence in recent months, as even basic medicines such as Panadol have disappeared from the shelves amid accusations that the central bank is delaying subsidy payouts to importers, who have therefore stopped distributing stocks.

Employees of two public hospitals that are at risk of closing down began an open-ended strike yesterday. Sibline Governmental Hospital in the Chouf and Shahar Gharbi Governmental Hospital in the Aley district warned earlier this week that they would close if the government did not pay up, enabling them to secure medical supplies amid widespread shortages and pay their employees. Medical staff have consistently warned that without government support, private and public hospitals will be forced to severely curtail the surgeries and medical care they can provide patients amid a dire economic crisis. Over the past months, pharmacy shelves have emptied and hospitals have been facing shortages in medication given the central bank’s delayed payments to importers. As a consequence, doctors and hospitals are struggling to find medication needed to treat many diseases and illnesses, including cancer.

The Lebanese Army thwarted yet another people smuggling attempt. The army announced yesterday that it had arrested 73 illegal migrants — including one Turk, 32 Syrians and 40 Lebanese — off the coast of Tabarja, north of Beirut. This year has seen a marked increase in the number of attempted illegal boat crossings from Lebanon to Cyprus. In the first six months of 2021, UNHCR, the UN refugee agency, recorded 659 people, the vast majority Syrian, as having attempted the risky sea route out of Lebanon amid the country’s worsening economic situation. In the precisis years 2018 and 2019, the total number of people who attempted the crossing stood at 490 and 270 respectively.

Dozens of high school students protested for a second consecutive day yesterday in front of the Education Ministry and the houses of the caretaker prime minister and education minister. The students were calling for the cancelation of the baccalaureate exams, which they must pass to begin university, citing the disruptions to the school year caused by the pandemic and the country’s socioeconomic crisis. Social media posts showed scuffles breaking out at the Education Ministry as police prevented students and their families from entering the premises. Meanwhile, L’Orient Le-Jour reported that young protesters blocked roads near caretaker Premier Hassan Diab’s home in Tallet al-Khayyat, prompting the army’s intervention. The protests come little more than a week after the Education Ministry canceled the brevet exam, which students must pass to begin high school. The decision left students who have to sit for the baccalaureate feeling overlooked. As one student told L’Orient Today shortly after the decision was announced, “Didn’t we go through the same struggle, financially, emotionally and logistically, as the brevet students?

The second phase of elections for the engineers’ syndicate will take place on Sunday between 9 a.m. and 6 p.m. at the union’s headquarters in Bir Hassan. Naqaba Tantafid, an opposition coalition made up of independent groups, yesterday released a list of candidates for the elections’ second phase in Beirut. During the first phase, Naqaba Tantafid won an unprecedented landslide against mainstream parties, securing 221 out of 283 seats in the Council of Delegates, and 15 out of 20 seats in four branch councils. On Sunday, the general assembly will elect four department representatives, council members, six members of the order and a new president.

Want to get the Morning Brief by email. Click here to sign up.Saad Hariri gave up the role of prime minister-designate yesterday after nearly nine months of failing to agree with President Michel Aoun on the formation of a cabinet. Following a 20-minute meeting, Hariri said from Baabda Palace, “President Aoun demanded amendments that I considered to be substantial in the cabinet lineup.” In...