Hariri steps down as premier-designate, plunging Lebanon into further chaos

Saad Hariri has stepped down from his position as premier-designate, following nine months of failing to form a government in coordination with President Michel Aoun. 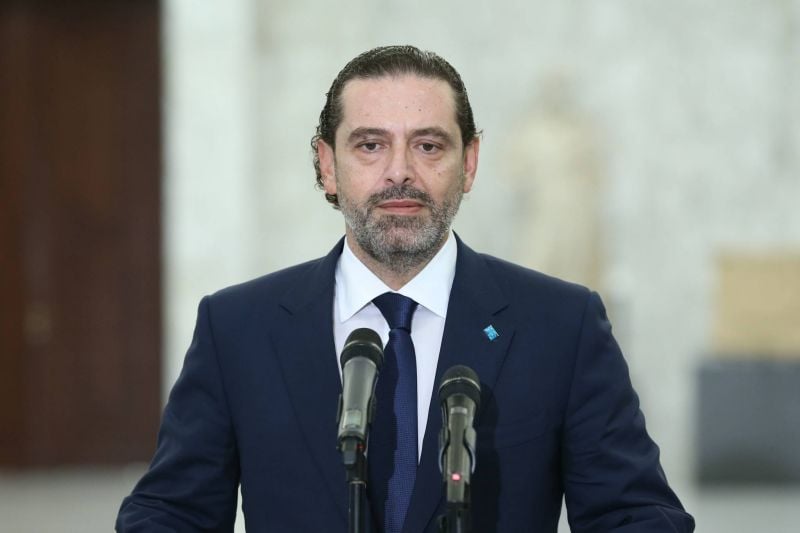 Saad Hariri resigned from his post as premier-designate on Thursday. (Credit: Dalati & Nohra)

BEIRUT — Lebanese Prime Minister-designate Saad Hariri stepped down on Thursday after nearly nine months of failing to form a government with President Michel Aoun, plunging the floundering country into further chaos amid its most severe economic crisis in decades.

“President Aoun demanded amendments that I considered to be substantial in the cabinet lineup,” Hariri said following a 20-minute meeting with Aoun at the Presidential Palace in Baabda. “It is clear that [Aoun’s] position has not changed,” he said, adding that the two would “not be able to reach an understanding with each other.”

Mere hours after the announcement, the lira, whose value had already hit a record low earlier in the day, was thrust into further volatility and uncertainty, and its value was beginning to slide as the market closed. Meanwhile, protests erupted across the country with demonstrators blocking roads in Tripoli, Sur, Sidon and several areas of Beirut, condemning the state’s failure to form a government.

Wissam, a protester at a roadblock in Beirut’s Ras al-Nabeh, said he had been hopeful that Hariri would succeed in forming a government today. “But when Hariri resigned, the lira rate [plummeted]. ... We want our voice to reach the president, who has taken us to hell. We can't even buy milk for our children, and there’s no Panadol in the pharmacies," Wissam told L’Orient Today.

On Wednesday, Hariri presented Aoun with a cabinet lineup proposal reportedly consisting of 24 ministers, which was seen as a final attempt at forming a government amid speculation that he would step down over his stalemate with the president. Many hoped this proposal would end the monthslong political impasse and see the establishment of a cabinet empowered to steer the country out of its devastating economic crisis.

However, Thursday’s announcement signifies that Hariri and Aoun failed to agree on the makeup of a future government despite having met 20 times during the better part of a year.

A statement from the presidency published on Thursday accused Hariri of being unwilling to discuss changes to the cabinet lineup proposal he had presented. It said Hariri suggested an additional day for Aoun to consider the proposal, but the president declined, saying, “What is the use of an extra day if the door to discussion is closed?”

The statement added that Aoun will set a date to hold binding parliamentary consultations with MPs to appoint a new prime minister as soon as possible.

Under Lebanon’s sectarian power-sharing system, the president must be a Maronite Christian while the prime minister must be a Sunni Muslim. There is no immediately apparent alternative to Hariri, a three-time former premier.

Lebanon has been without a fully empowered government for nearly a year, as its economic crisis has deepened with no end in sight.

Hariri, who was designated to form a government in October 2020, had originally pushed for an 18-member cabinet of independent specialists in line with a blueprint spearheaded by French President Emmanuel Macron, which proposed a government capable of implementing much-needed reforms.

Hariri has publicly accused the president of obstructing formation efforts in a bid to acquire enough ministers to secure veto power for him and his allies, although Aoun has denied this.

In a televised evening interview with Al Jadeed following his resignation, Hariri doubled down on the accusation, maintaining that he stepped down after Aoun insisted on obtaining veto power and that few members from the Free Patriotic Movement, the political party the president founded, would give the proposed cabinet confidence.

Hariri is now the second designated prime minister to resign in less than a year. In September, Mustapha Adib, a Lebanese diplomat, resigned less than a month after being appointed to the post, when cabinet formation efforts were stalled over a disagreement about who would lead the Finance Ministry.

The previous government, headed by caretaker Prime Minister Hassan Diab, resigned in the aftermath of the catastrophic Aug. 4 Beirut port explosion, which killed more than 200 people and injured thousands.

Following Hariri’s announcement, French Foreign Minister Jean-Yves Le Drian condemned the authorities’ failure to establish a government, saying that Hariri’s resignation is “one of the more dramatic episodes in the inability of Lebanese officials to find a way out of the crisis," and accused them of “cynical self-destruction.”

BEIRUT — Lebanese Prime Minister-designate Saad Hariri stepped down on Thursday after nearly nine months of failing to form a government with President Michel Aoun, plunging the floundering country into further chaos amid its most severe economic crisis in decades.“President Aoun demanded amendments that I considered to be substantial in the cabinet lineup,” Hariri said following a...