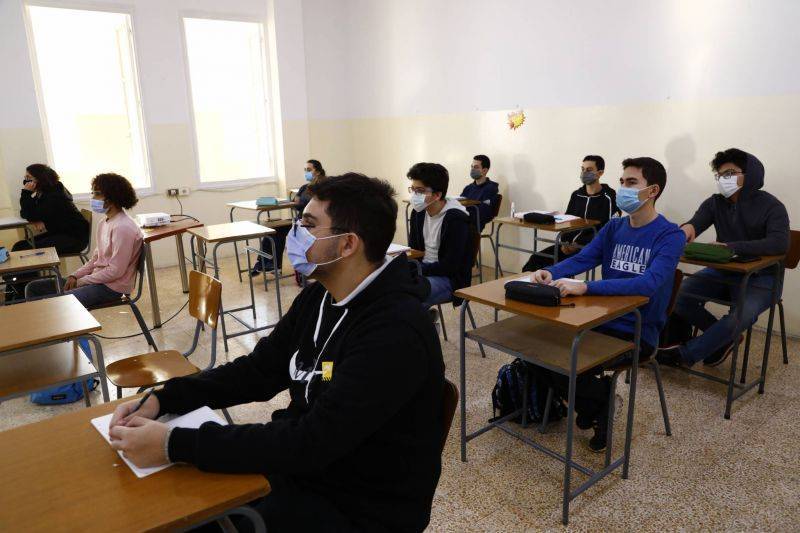 BEIRUT — Lebanese brevet students breathed a sigh of relief on Monday evening when the Education Ministry announced the cancelation of their official exams. The news came after weeks of back and forth about whether the exams should be held given the obstacles schools have faced amid the COVID-19 pandemic and the economic crisis.

The announcement marks the second straight year that the brevet, which students must pass to begin high school, has been canceled.

Ahead of the decision, brevet and baccalaureate students had called for protests across the country demanding the cancelation of the both exams.

“Our mental health matters, everyone is having depression because of the problems [they are] having in Lebanon, some people don’t have electricity, they are studying using candles, we are under pressure!” a student tweeted on Sunday, explaining the reasons behind calls for the exams’ cancelation.

In light of the cancelation of the brevet, some students will be granted certificates in line with the grades they achieved in classes during the year, while other schools will prepare tests to be taken online and the grades achieved will substitute for the official exams’ grades.

The ministry’s decision comes at the end of what was for many a long and challenging academic year.

“It was a tough school year because of online classes and their inconvenience due to [internet] connection issues,” Yara Chehab, a brevet student, told L’Orient Today.

“Sometimes I would not have an internet connection and would therefore need to learn a certain lesson on my own. This made it hard to grasp the content … but I’m glad our teachers tried their best to at least help us prepare for the official exams,” she added.

“I feel so happy that the official exams are canceled,” Chehab went on, “I was so worried about not being able to grasp all the material, especially that it was hard during this academic year with all the internet inconveniences.”

While the students meant to sit for this year’s brevet can now rest easy, the cohort scheduled to sit for the baccalaureate exams, which students must pass to continue on to university, is less fortunate.

During a televised interview on Tuesday, Hilda Khoury, the Education Ministry’s counseling and guidance director, said, “The Ministry of Education is committed to the baccalaureate certificate exams until the end,” adding that “everything is ready for the exams, educationally, administratively, logistically and healthily.”

But baccalaureate student Fouad questioned this assessment. “Didn’t we go through the same struggle, financially, emotionally and logistically, as the brevet students?” he asked, explaining to L’Orient Today that he is really anxious about the upcoming exams, having had so little time and means to prepare for them properly.

Speaking to L’Orient Today on Tuesday, Khoury, however, reiterated the ministry’s commitment to the baccalaureate going ahead. “We find that sitting for the baccalaureate's official exams is crucial for the student, and the Ministry of Education, along with the union of teachers, is committed to its fulfillment,” she said.

Khoury added that much of the ministry’s decision to cancel the brevet exams had been based on the union of teachers “unwillingness to participate in the monitoring of the exams’ process.” This same unwillingness does not affect the baccalaureate, she said.

Lebanon’s educational system has been in turmoil since classes were first suspended following the outbreak of the Oct. 17 uprising in 2019. After weeks of closure in late 2019, schools were again shut in early 2020 as the country went into lockdown to curb the spread of COVID-19. The COVID-19 pandemic coupled with the country’s deepening economic crisis and its associated challenges, such as fuel shortages that have caused electricity blackouts and disrupted internet connectivity, have wreaked havoc on equitable access to education ever since.

“The social and economic crisis in Lebanon is turning into an education catastrophe, with vulnerable children facing a real risk of never returning to school,” a Save the Children report published earlier this year said.

With the crises not likely to ease anytime soon, the worsening conditions pose an existential threat to an educational ecosystem becoming ever-more reliant on online learning.

“Lebanon needs to urgently embark on a comprehensive reform agenda that puts students at the center of the education sector and prioritizes quality of education for all,” a recent World Bank report about Lebanon’s education sector said.

Two months later, in April, a survey conducted by the United Nations refugee agency, the UNHCR, found that of a sample of 10,000 needy families, none had a tablet or computer at home. These families had access to a smartphone only. The families also reported spending about LL25,000–LL50,000 per week on internet services for their phones, which the report describes as a large proportion of their disposable income, stating “even if prices remain the same but more people become unemployed, … [this cost] will be an additional source of inequality.”

These challenges led the government last year to cancel both the brevet and the baccalaureate exams.

In April this year, schools in Lebanon reopened after being closed for more than three months during the most recent coronavirus lockdown. Some schools reopened at partial capacity with alternating days of attendance while others continued to adhere to an exclusively online curriculum.

With no end in sight to the economic upheaval in Lebanon and no certainty as yet whether school will resume in-person or otherwise after the summer vacation, the Education Ministry has already hinted that the brevet may continue to be canceled in upcoming years so that “students [do] not ... remain hostage to political and economic fluctuations.”

BEIRUT — Lebanese brevet students breathed a sigh of relief on Monday evening when the Education Ministry announced the cancelation of their official exams. The news came after weeks of back and forth about whether the exams should be held given the obstacles schools have faced amid the COVID-19 pandemic and the economic crisis.The announcement marks the second straight year that the brevet,...