Independent groups within the opposition coalition won 15 out of 20 seats in four departments of the Order of Engineers and Architects, as well as 221 of 283 representative seats. 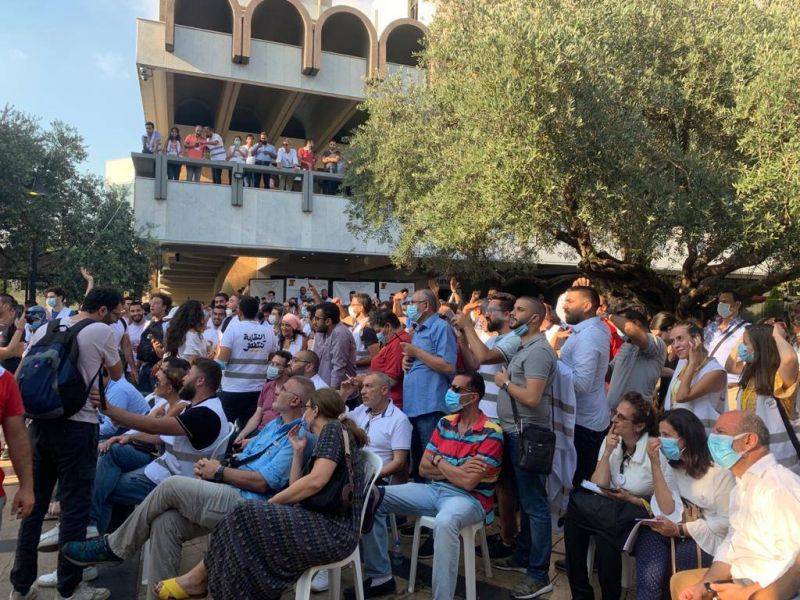 A crowd of engineers awaits the results of the elections. (Credit: Lyana Alameddine/L’Orient-Le Jour)

Independent groups from the Naqaba Tantafid (“The Order Revolts”) opposition coalition won an unprecedented landslide victory against mainstream parties in the Order of Engineers and Architects elections on Sunday.

Naqaba Tantafid is a coalition that includes the group of the same name in addition to the Lebanese Opposition Front coalition, made up of Beirut Madinati, Khatt Ahmar, Li Haqqi, the People’s Anti-corruption Observatory of the “We Want Accountability” civil society movement, the Citizens in a State — locally known as Mouwatinoun wa Mouwatinat fi Dawla — Mentechrin and Tahalof Watani.

These groups that were born in the wake of the Oct. 17, 2019, uprising share a common denominator: an opposition to the current political system that is based on power sharing. They are backed by the Kataeb and the Independence Movement of former MP Michel Moawad, two established parties included in the Lebanese Opposition Front coalition, in addition to the Lebanese National Bloc and the Lebanese Communist Party.

Naqaba Tantafi won 15 out of 20 seats in four departments, including the civil, architecture, agricultural and public sector departments. Voters in each department had to choose five members for every engineering branch.

The coalition won all the seats in the civil, architecture and agriculture sectors but failed to make a breakthrough in the public sector department, in which the Future Movement candidate Mohammad al-Hajjar won a seat.

Among the 20 winners, the general assembly will have to elect four department representatives during the second round of voting slated for July 18, which is also the date set to elect council members and a new president, as well as six other members of the order. The winners are already preparing for this battle, which they expect to triumph in as well.

Naqaba Tantafid won 221 of 283 representative seats. It had only nominated 232 candidates for these posts.

The assembly of delegates, which is equivalent to Parliament at the national level, controls the actions of the syndicate’s council and is responsible for voting on its budget.

The winning list crossed swords with representatives of traditional parties, including Hezbollah, the Amal Movement, the Free Patriotic Movement and the Progressive Socialist Party, but also with other opposition forces such as Muhadissoun Mustaqillun (“Independent Engineers”), Lana al-Naqaba (“The Order is Ours”), and al-Majmoua al-Mihaniya (“The Professional Group”) united yesterday under the coalition of al-Muhandess Awalan (“Engineer First”).

The independent group tried to ally with these parties in a bid to form a single list, but negotiations faltered a few days before polling day.

Accusations on social media have been leveled against the alliance between Naqaba Tantafid and the Kataeb. This is because for some the Kataeb is a traditional party. Allying with the Lebanese Communist party was another reason for the accusation.

Serge Dagher, a member of the political bureau of Sami Gemayel’s Kataeb party, responded to these accusations via L’Orient-Le Jour, saying, “any party that wishes to support the forces of change must be able to do so, regardless of this party’s relations with the Kataeb.”

Al-Muhandess Awalan is another coalition list. It is said to be backed by the Lebanese Forces and businessman Bahaa Hariri, who is the brother of the premier-designate Saad Hariri. An engineer affiliated with al-Muhandess Awalan, however, denied that the list was infiltrated by any political party.

Speaking with L’Orient-Le Jour on condition of anonymity, he said, “We do not cooperate with political parties.” However, he added, “Nothing prevents these parties from asking their supporters to vote for an independent candidate they deem qualified.”

In the same vein, a candidate for the LF told Radio Liban Libre that his party’s list consists of partisans as well as “some independent candidates that the LF deems fit to assume positions in the syndicate’s council.”

As for Bahaa Hariri’s support of the opposition’s coalition, Jerry Maher, Bahaa Hariri’s advisor and spokesperson, said that “he has nothing to do with the Order of Engineers and Architects elections.”

The syndicate’s council has been controlled by the establishment parties for the past 30 years. While an opposition candidate, Jad Tabet, was elected head of the Beirut Order of Engineers in 2017, he had to deal with 14 partisan members on a council of 16 members.

About 7,650 engineers out of nearly 60,000 syndicate members cast ballots on June 27. The turnout was significant, considering that no more than 3,000 engineers usually vote during the first round.

L’Orient-Le Jour journalist Lyana Alameddine spoke to Aref Yassine, a member of Naqaba Tantafid and secretary-general of the civil engineers department. He explained that the number of voters shows that “the engineers have rejected the syndicate’s sad reality, and decided to change it.”

He hopes that the syndicate’s elections are “a prelude to what will be in store in the next municipal and legislative elections.”

Democracy and enthusiasm were demonstrated on election day, Alameddine reported. Many young engineers wearing white vests with the logo of Naqaba Tantafid written on the back were mobilized, often chanting slogans against the parties in power.

“Pack your stuff and go home,” they chanted at the top of their voices during ballot counting.

Speaking with L’Orient-Le Jour, Divina Aboujaoude, who won at the architecture department, expressed hope that political “parties no longer have access to the council, in order to avoid conflicts between political and professional interests.”

“I have the profession’s best interests at heart. But, political parties give priority to theirs and seek to integrate their partisans into the council so as to have a presence there, regardless of whether or not the candidates are competent,” she added.

Observers indicated that the ruling parties have not made their alliances public. Speaking with L’Orient-Le Jour, outgoing member of the syndicate’s council Firas Bou Diab, who is affiliated with the PSP, said that in the first round of the elections, each party seeks to have its candidate win and keep the negotiations until it is time to elect the head of the syndicate and members of its council — a vote scheduled to take place on July 18.

Even the LF, which brags about leading the battle without any alliances with the traditional parties, agreed with the Future Movement on exchanging votes.

“Our relations with the LF in the syndicate’s council are strong. Based on that, the [LF] consented to the exchange of votes with us,” vice president of the council, Bassem Oueini, who is affiliated with the Future Movement, told Alameddine.

He added that their list also includes some independent candidates, and that they are competent and bear no enmity toward any of the relevant parties.

As for the FPM, an FPM member and a candidate who lost the elections said that the party had allied with Hezbollah as part of its strategic alliance. Hezbollah tried to bring the views of the FPM and other parties closer in the elections, but to no avail, the engineer, who declined to be named, added.

Independent groups from the Naqaba Tantafid (“The Order Revolts”) opposition coalition won an unprecedented landslide victory against mainstream parties in the Order of Engineers and Architects elections on Sunday.Naqaba Tantafid is a coalition that includes the group of the same name in addition to the Lebanese Opposition Front coalition, made up of Beirut Madinati, Khatt Ahmar, Li Haqqi,...

Mikati reiterates his support for Frangieh, saying the Marada leader could form a 'winning duo' with Berri