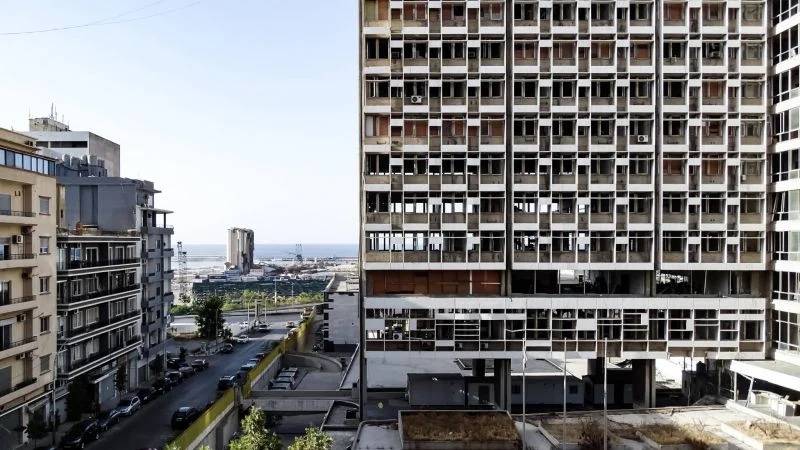 Halfway between the hills of the Bourj Hammoud landfill and the Grand Serail in downtown Beirut is the point where Armenia Street turns into Gouraud Street. It is here that we find ourselves at the lowest, most subsident point of our psychogeographical journey between the two spots.

On the same side of the street, about 700 meters from the ruins of the railway station — the same distance from the wreckage of the port’s gran silos — stands a third vestige: an imposing square building supported by four pre-stressed concrete porticos spanning 14 meters. It is a monument now blown away, emptied of its administrative entrails. Within the building’s modernist architecture and delicate brutalism, in the shadow of its concrete claustra, the great idea of public service has died.

This immense block, designed in 1965 by the Centre d'Etudes Techniques et Architecturales (CETA), was intended to house an efficient and transparent administration that would govern the production and distribution of electricity at the national level.

But since Aug. 4, 2020, the Electricité du Liban (EDL) headquarters building in Beirut’s Gemmayzeh neighborhood has joined the ranks of other spectral buildings in the city, such as the shelled-out Holiday Inn or the Murr Tower, and now symbolizes the obvious, indisputable, and collective failure of the Lebanese political class to govern the country and provide public services.

Not only is EDL responsible — via transfers from the treasury — for more than 40 percent of the country's public debt, but it provides only one to two hours of electricity per day while poisoning the Lebanese by allowing the gap in supply to be replaced by thousands of private diesel generators.

It is in this very building, long before the cataclysm of the port explosion, that the new slogan of the entire Lebanese political class was born: the pathetic “ma khallouna” — “they didn’t let us do it.” This phrase, often used by Lebanon’s public figures, marks the critical moment when Lebanese oligarchs take note of their failure but shift blame for the collapse on others.

Ma khallouna, and yet, despite their acknowledged and proclaimed inability to reform or govern, the ruling class remain in their positions, for fear of losing their seats and the privileges attached to them.

The emergence of ma khallouna in the political discourse is the inflection point — from sharing the rent to shirking blame. Ma khallouna is therefore the beginning of the end. But endings, as we know, can be long and painful.

In the meantime, when night comes, the city locks itself in thick silence and profound darkness. Then, in the early morning, the generators start up one after the other and Beirut begins its long, toxic purr. Through its thousands of chimneys, it exhales the black fine particles that will land on balcony tables, tiled terraces and windowsills, but which will especially lodge into the lungs of the Beirutis themselves. The tightly packed buildings become so many immobile lorries burning their tons of diesel paid for in "cash" — in "fresh," as we now say — by those who breathe their poisoned dust.

Corruption makes you a hostage while forcing you into believing that it is indispensable. It deceives you, it lulls you to sleep, it involves you in a plot in which it gives you the illusion that you are the main actor. Systemic, it deprives you of your citizenship and it makes you a client. It convinces you that without it, that “other” would take everything that is rightfully yours. A pernicious drug, it enters into people's minds to rewrite the social contract, modify behavior, alter bodies.

Everything is corrupted. The air you breathe. The water you drink. The light that brightens your nights. Corruption is certainly a cancer for the administration and the economy, but above all it is a cancer for your lungs, for your physical body.

Their ma khallouna, born behind the concrete cloister of the EDL headquarters, is the counterpart of our "kellon yaane kellon” originally generated by the 2015 waste crisis symbolized by the two large dumps that marked the beginning of our stroll through Beirut. Thus, the political slogan of this long street builds as we walk along. It tells us the story of Beirut's transformation into a failed city and the way in which it prefigures the failures of our contemporary world.

These two slogans — ma khallouna and kellon yaane kellon — respond to and feed one another. But no dialogue is possible today. And, for the moment, it is still “them” who make “us” corrupt in spite of ourselves: corrupt when, through cowardice or lack of imagination, we still vote for them; corrupt when we pay the bills of our private generators; when we beg at the doors of our banks for our siphoned off savings or devalued salaries; when we breathe their stale, noxious, fatal air. It is from this very corruption that we must free ourselves, from this corruption that is within us.

Over the decades, the Lebanese political class has emptied the concepts of state and citizenship of their meaning, making corruption the only defining relationship that governs them. Indeed, Lebanon has become a “corruptocracy”: the ultimate form of the amalgam between public and private, between state society and the individual, the total cannibalization of the public realm by private actors. Not the big capital, no, much worse than that: small private entities, the underlings, the accomplices, and other profiteers who made of the headquarters of EDL the symbol of the three great crises that are currently rocking the world.

First, there is the indebtedness of countries such as Lebanon, Suriname and Zambia, which are already in default, Belarus, which is on the brink of collapse, or Egypt, Ghana and Tunisia, which are in serious debt, threatens to tip the world economy into a dystopia of defaults.

There is the threat of power shortages in Europe this winter because of a series of bad policy decisions, with the shutdown of almost half of France's nuclear reactors and the sabotage of the Nord Steam gas pipelines linking Germany to Russia.

And finally, air pollution, which reportedly causes seven million deaths a year. How many people in Lebanon will be added to the long list of victims of the thugs who govern us?

Camille Ammoun is a writer, public policy consultant and member of Beyt el-Kottab. His latest book is 'Octobre Liban' (in French; Éditions Inculte, 2020). His column appears monthly in L’Orient-Le Jour and L’Orient Today.

Halfway between the hills of the Bourj Hammoud landfill and the Grand Serail in downtown Beirut is the point where Armenia Street turns into Gouraud Street. It is here that we find ourselves at the lowest, most subsident point of our psychogeographical journey between the two spots. On the same side of the street, about 700 meters from the ruins of the railway station — the same distance from...