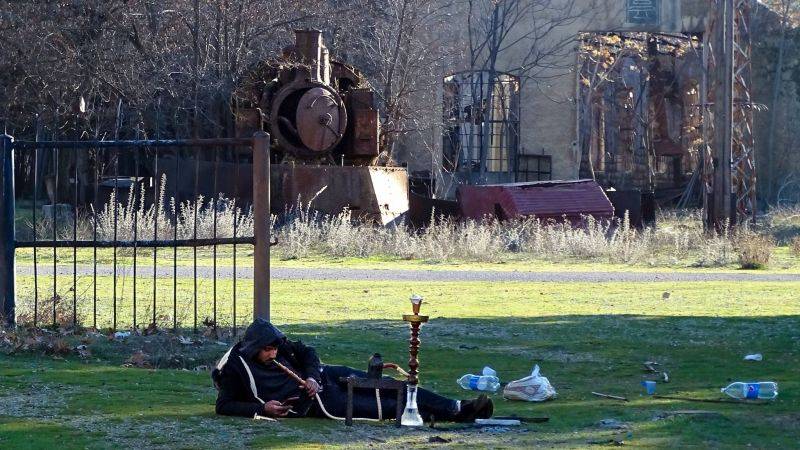 A man smokes an arghileh at the Rayak railway station in the Bekaa Valley on January 8. (Photo credit: Camille Ammoun)

Charles Helou, Pierre Gemayel, Emile Lahoud, the humpbacked bridge that crosses the Beirut River — these motorways crush any pedestrian. Yet we continue our walk past the landfill, the roundabout and the river, toward the geographical center of Beirut. But a few dozen meters on, between the pastel-colored buildings and the arcaded balconies (some of which were restored after the cataclysm of Aug. 4, 2020), today's walker will not see the metal railway bridge which, until recently, crossed Armenia Street. This long-ago link between the two capitals – Beirut and Damascus – was damaged by decades of neglect, finally falling in Aug. 2019 onto the roof of a truck that was passing beneath it, foreshadowing all the collapses to come.

Also in August, more than a century earlier – on Aug. 3, 1895 – the passengers of the first Beirut-Rayak-Damascus train embarked from the Mar Mikhael station. They would use this same bridge to cross the city and leave it behind through the narrow plain that separates Beirut from the mountains. Afterward, they’d begin climbing the steep foothills of Mount Lebanon toward the Jamhour, Aley, and Sofar train stations. Stunned by the prowess of technology and progress, they would then pass the Dhar al-Baidar crossing more than 1,400 meters above sea level before descending into the Bekaa Valley to head for the Rayak station and cross the Anti-Lebanon Mountains to their terminus in Damascus-Qanawat station – the starting point of the Hejaz Railway.

The Beirut-Damascus line was built to counter British plans for Haifa-Damascus and Jaffa-Damascus railways that would have marginalized Beirut and its port. On the steep slopes of Mount Lebanon, several sections of the railway are rack-and-pinion lines, and in winter, to cross the snowy mountains, the locomotives had to be equipped with snowplows. On the way back down to the Bekaa Valley, at the Maalaqa station near Zahleh, the Swiss-made rack-and-pinion locomotives were replaced by conventional traction engines, faster and more efficient at crossing the lower Anti-Lebanon mountain range. According to various media reports, the passenger trains ran at 10 kilometers per hour in the rack-and-pinion railway sections and 30 kilometers per hour in the classical traction sections, an average of about 20 kilometers per hour. The journey between Beirut and Damascus lasted roughly 12 hours.

This railway of extremes had been built by the French Société de Construction des Batignolles. A decade earlier, in 1885, that same group had participated in the first attempt to dig a tunnel under the English Channel by manufacturing the infamous Beaumont hydraulic drills. This effort showed that “Les Batignolles” had the drive to cross the most ambitious natural boundaries and that modern Lebanon, which was built with the help of nature, could also be developed in spite of it. Today, no one can say what would have been the fate of the State of Greater Lebanon, proclaimed only 15 years after the construction of the Beirut-Damascus railway line, had the Haifa-Damascus line, for example, been completed beforehand. The history of the Levant – and therefore of the world – would undoubtedly have been different. From this point on, all uchronias are possible.

The lines that would have connected Damascus to the cities of the Palestinian coast would never be built, and Beirut would start a period of growth and prosperity, finally stopping with the last Beirut-Damascus train trip in 1976 and the occupation of the Rayak railway site by the Syrian army.

Between the symbolic, but almost unnoticed, collapse of the Mar Mikhael railway bridge in August 2019 and the dramatic collapse of the northern part of the port's silos in August 2022, Beirut’s exclusion from regional and international trade routes was sealed. Moreover, since the signing of the “Abraham” normalization agreement between Israel and the United Arab Emirates, the port of Haifa, an old competitor of Beirut, seems to be on the verge of taking its revenge. Indeed, there are talks of a Haifa-Dubai rail line that would link the Gulf to the Mediterranean and position itself as a railway equivalent of the Suez Canal. According to the Khaleej Times, the project was even mentioned by officials from both countries on the sidelines of the World Government Summit during Dubai Expo 2020.

On Aug. 30, 2019, no one foresaw in the fall of the railway bridge at Armenia Street the first signs of the massive collapses to come; from the fall of the banking system and the national currency to the tumbling of the port's silos, which confirmed Beirut's disappearance from the map of regional and international trade routes. The poor choices of the Lebanese political class are responsible for the fall of the “bridge” that Beirut once was – poor political choices but also the incompetence, contentment, negligence and corruption of which this political class made a governance system.

While the Abraham signatories dream of new horizons, in Lebanon, no train has run on a railway for decades, and no passenger or product has been transported from one station to another. And for decades the employees of Lebanon’s Railways and Public Transport Office – those who aren’t “ghost employees” on the government’s payroll who never actually show up – have been reduced to managing the small disputes of what is essentially an immense real estate park.

Without trains, passengers or goods, the Railways and Public Transport Office continues to operate, albeit at no load. And the Lebanese state, like its railway network, has never recovered from the 1975 Civil War, now only existing to feed a parasitic administration.

Charles Helou, Pierre Gemayel, Emile Lahoud, the humpbacked bridge that crosses the Beirut River — these motorways crush any pedestrian. Yet we continue our walk past the landfill, the roundabout and the river, toward the geographical center of Beirut. But a few dozen meters on, between the pastel-colored buildings and the arcaded balconies (some of which were restored after the cataclysm of...