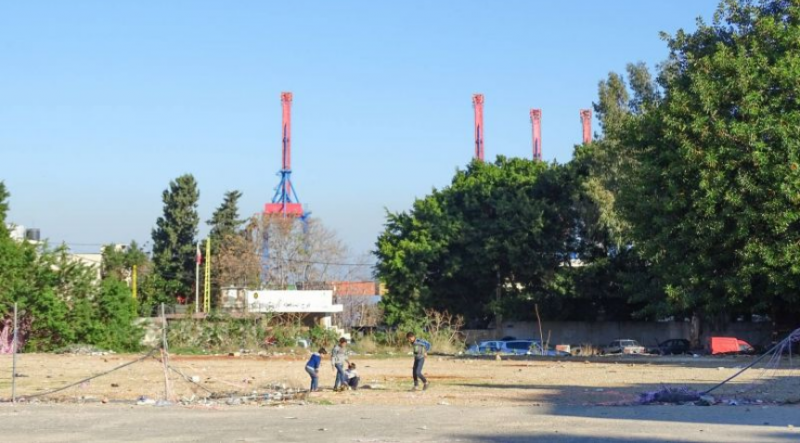 “I don't understand why after all you've been through you haven't all gone mad,” said L.S. while discovering the ungovernable complexity of Lebanon through a long walk in the city of Beirut.

“We tend to forget,” I said. But what had we experienced that was so traumatic for this question to arise? I thought, on the contrary, that we had had happy lives.

Walking along this street, which starts at the Bourj Hammoud landfill and ends at the bottom of the Qantari hill where the Grand Serail sits, we embarked on this psycho-geographical project of placing Beirut back in the debates of the contemporary world. And so doing, we saw women and men bustling about trying to create the illusion that “everything is OK.”

We saw buildings shattered by what we laconically call the explosion, as we just as laconically call the war this period which started in 1975, and which is supposed to have ended in 1990. We saw other buildings restored, and yet others forever gone, that we mentioned like we mention ghosts. We saw two massive waste dumps that surround a small fishing port and transform the eastern Mediterranean coastline. We heard stories of downgrading, shattered destinies, broken dreams and missed opportunities. We also heard incredible stories of resistance and creativity, collective intelligence and hope… yes, despite everything, hope.

Later, L.S. sent me a message: “Thank you for this walk. Beirut is a generous city, but what a waste!”

“The city is sinking into the ground,” I answered with an easy metaphor. I then tell myself that subsidence could leave the field of geology and extend to the realms of the political, the social, the human.

Subsidence. A geological term. The action of dropping below ground level. Collapse. Dictionary of the French language, Émile Littré.

Subsidence, then, is the slipping away of the ground from under the feet of those who walk on it. It is the compaction of the land under the weight of infrastructure built by man. It is a collapse, gradual or sudden, into an underground emptied of its substance, water, oil or other minerals, which were extracted to feed the gargantuan appetite of industrial capitalism. It is the falling building and the crumbling wall; it is the leaning tower and the collapsing road. It is the vertical movement of our cities sinking under the weight of human activities or into the hollows created by them.

Then, over the course of our steps, subsidence became the power that wears out and the institution that is corrupted; the society that crumbles and the body that fails. Subsidence is the debacle of sustainability; it is the opposite of resilience.

Long before the approach that we propose here to the concept of subsidence, that of resilience itself traveled through disciplines. It began in physics, where it designates the ability of a material to regain its original shape after a shock. It then extended to other fields to designate the capacity of a system to overcome a transformation of its environment. It therefore applies to an ecosystem, a city, a polity, a social group or an individual.

For an individual, for example, resilience consists of acknowledging a traumatic event and rebuilding one’s life so as to no longer live in misery. Rather than resilient, the Lebanese are, at best, resisting and surviving, or at worst, they have sunk into resignation and denial. Abused, extorted, abducted, the Lebanese will (perhaps) be able to begin their work of resilience when they have finally freed themselves from their abusers.

A city is resilient when it plans and acts to prepare, adapt and respond to gradual changes or unexpected shocks. And, since 1975, despite a few moments of splendor, Beirut has been sinking. Beirut does not evaluate anything. It does not plan anything. Its urbanity is unraveling, its urban fabric is fraying, its economy is disintegrating. Layers of its urban history are obliterated by financial urbanism, real estate capitalism, corruption, and war. The city has lost entire neighborhoods, exceptional women and men, iconic buildings. Beirut today is a forest of missed opportunities. The city has become the mere shadow of the metropolis it could have been.

Nourished in the collective unconscious by the popular legend of a Beirut "seven times destroyed, seven times rebuilt," by the myth of the phoenix which stubbornly rises from its ashes, or by the verses of Nadia Tueni whose "peninsula of noises (…) is a thousand times dead, a thousand times reborn,” the resilience of the Lebanese people is today shattered by a meltdown of cataclysmic magnitude. Political, economic, financial, social, environmental, memorial, existential, these compounded crises are no longer crises but a systemic collapse from which it will be impossible to recover. The status quo ex ante is no longer within reach, we must invent a new one.

Hence, neither Beirut nor its residents are resilient. On the contrary, they are sinking into the mud of the delta of a large river; the great river of the world which carries all the failures of our contemporary civilization. The foundations of our society are collapsing before their eyes, and the ground is slipping away under their feet. If Littré defines subsidence as “The action of dropping below ground level,” then, Beirut, its inhabitants, and all the Lebanese, are today, indisputably, subsident.

Another myth, that of Lebanon as a message to the world, is today as worn-out as that of the phoenix legend. In 1989, in an apostolic letter, Pope John Paul II formalized the idea that “Lebanon is more than a country: it is a message of freedom and an example of pluralism.” However, forty years earlier, Georges Naccache described Lebanon in a totally different way.

He wrote in 1949: "All the images that evoke the distress of ungoverned things – the abandoned ship, the collapsing building – apply to the fate of present-day Lebanon.” For its centenary, which of these two messages does this small country address to the world? That of freedom and pluralism? Or that of ungoverned things? Still, and despite everything, like a carrot and a stick, both, simultaneously.

Nevertheless, the louder message today is that of an exhausted model. The caricature of a world in denial that lives beyond its means. A world where predatory classes pay themselves from the back of a beast until they kill the beast. A sick democracy that excludes more than it represents, that reproduces its elites more than it renews them. Cities that divide more than they mix. Beirut the subsident recounts the slow and somnambulistic failure of our civilization. And if this concept, this irremediable vertical movement of the ground, uneven but continuous, must one day pass from geology to humanities to tell the story of our world, where else than in Beirut could it operate this transformation?

“I don't understand why after all you've been through you haven't all gone mad,” said L.S. while discovering the ungovernable complexity of Lebanon through a long walk in the city of Beirut.
“We tend to forget,” I said. But what had we experienced that was so traumatic for this question to arise? I thought, on the contrary, that we had had happy lives.
Walking along this street, which...