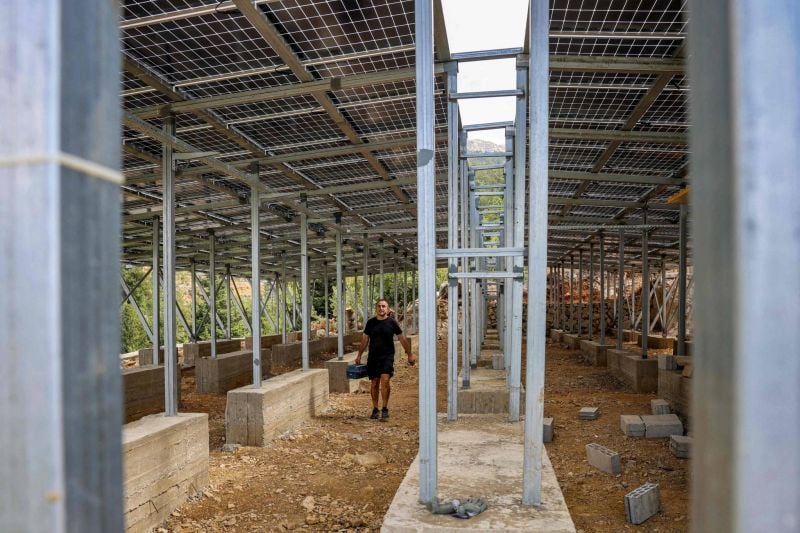 A technician works on the solar panels system installed for the village of Toula in northern Lebanon on August 29, 2022. (Credit: JOSEPH EID / AFP)

BEIRUT — When a door-to-door salesman offered Mazen Kanaan the chance to escape Lebanon's regular energy blackouts and soaring electricity bills by installing a cheap solar panel on his home in the capital Beirut, Kanaan jumped at the opportunity.

Within a fortnight the panel failed, and the salesman stopped answering his calls.

Energy expert Imad Hage Chehade from the Industrial Research Institute (IRI) later inspected the system and concluded Kanaan was probably sold a worn-out panel that had been torn out from a property in Italy and falsely advertised as new.

"The panel was supposed to last for 10 years — it barely lasted 10 days," said Kanaan, a 39-year-old accountant. "I had been saving for it for more than three months ... I poured my heart into this, and it was all just a scam."

Kanaan is among a growing number of people who have fallen victim to shoddy solar installations and fraudsters in Beirut, as a lack of power sparks a rush for green energy, experts say.

Kanaan said he reported the incident to the police, but "it was not taken seriously, as the police officer said that there are bigger issues at the moment".

Lebanon is turning to solar energy, but are there risks?

Decades of financial mismanagement and corruption among Lebanon's elite have plunged the country into a deep economic crisis that has eaten away at the currency's value and left the national infrastructure — including power generation — in chaos.

Most households get only a few hours of electricity each day, while wealthier families and businesses rely on expensive and polluting diesel generators.

Lebanon has 300 days of sunshine a year but less than 1 percent of state-provided power comes from solar energy, with 95 percent generated using oil. Lebanon missed a target of generating 12 percent of its electricity from renewable sources by 2020.

A growing number of citizens are looking to solar power as an affordable and reliable solution to their power woes, but a lack of a developed infrastructure means they face high installation costs, a lack of regulation, and scams.

"People in Lebanon are desperate for electricity, so they might, at times, not consider looking into the misleading sales of these products," said Chehade, the director of technology at IRI, which is affiliated to the Ministry of Industry.

"Many people are falling for this trap ... This is making it hard for people to actually trust in the new green potential."

Chehade and other solar experts say they have seen a growing number of fraud cases, in which faulty or old panels that had been sent to recycling in wealthy nations were instead imported to Lebanon and passed off as new.

Italian police in 2020 said they were investigating a waste treatment plant in Sicily over suspicions that old solar panels were being smuggled to Africa and the Middle East for resale, according to pv magazine, which covers the solar energy sector.

Chehade said most such panels still had stamps from the original installation that showed which country they came from.

Last year, the IRI identified another batch of panels apparently redirected from recycling facilities in Dubai, Chehade said, adding that the Ministry of Energy and Water had been informed.

Pierre El Khoury, head of the Lebanese Centre for Energy Conservation, part of the energy ministry tasked with supporting the development of renewable energy, said it was investigating the case.

Scams are not the only concern: poor-quality solar energy parts and installation are also common, a reflection of the need to increase training and standards for the industry in Lebanon.

Companies contacted by the Thomson Reuters Foundation gave prices ranging from $4,000 to $5,000 for installation of a residential solar panel that could power a house for six to 15 hours a day. This is as much as 30 times the average monthly salary.

The energy ministry is trying to fix the problem by introducing guidelines for solar buyers that stress the need for surveys and inspections by qualified engineers, and in October announced a free certification scheme for domestic solar systems.

However, Khoury said many people are not aware of the certificates, which confirm the systems have been correctly installed and tested.

"Solar companies or sellers are not informing the buyers of this procedure, probably because they want to get away with selling dysfunctional panels," he said.

The IRI has also begun organizing training for solar power industry workers, which include information on how to correctly install the systems, legal requirements and safety on the job.

The state-backed solar power certification system should be toughened to offer guarantees about how much energy panels will produce and how long they will last, Ayoub said, and should also be extended to cover large-scale and commercial arrays.

"These are essential for getting private and foreign funders interested in projects that can be financed," he said. "In the end, this would lead to more green jobs in the renewable energy sector, which would help the economy grow."

More action is also needed to inform communities of the potential and pitfalls of solar systems, he added.

In Beirut, Kanaan said he had abandoned his dream of going green.

"The solar panel I purchased was unfixable; now I've squandered money, time, and solar potential," he said, adding that he could not even afford to buy power from a generator now.

"I'm working to spread the word to warn others about the scam so that they are informed if they decide to make a purchase."

BEIRUT — When a door-to-door salesman offered Mazen Kanaan the chance to escape Lebanon's regular energy blackouts and soaring electricity bills by installing a cheap solar panel on his home in the capital Beirut, Kanaan jumped at the opportunity.Within a fortnight the panel failed, and the salesman stopped answering his calls.Energy expert Imad Hage Chehade from the Industrial Research...