The respective alliances of the two Christian parties, the Lebanese Forces and the Free Patriotic Movement, will be forged on an ad-hoc basis, depending on issues, whether sovereign or not 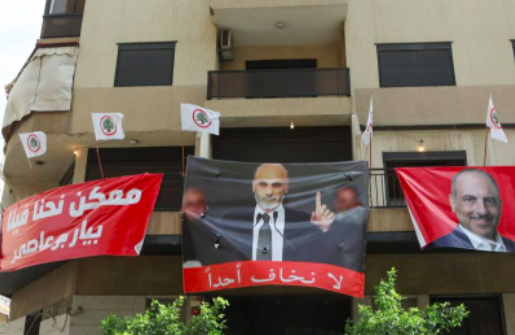 In the Christian neighborhood of Ain el-Remmaneh, a portrait of the leader of the Lebanese Forces Samir Geagea with the slogan "We are not afraid of anyone." (Credit: Mohamed Azakir/Reuters)

With 19 seats compared to 15 in 2018, the Lebanese Forces won a victory in the May 15 legislative elections.

It was a victory first against its long-time Christian opponent, the Free Patriotic Movement, which lost momentum in its race to the Parliament chamber, with 17 seats now compared to 18 in 2018.

This makes the LF the strongest Christian party in Parliament, overtaking by two seats the party of Gebran Bassil, son-in-law of President Michel Aoun.

This victory, however, was disputed by the LF’s opponent.

“In addition to our number of MPs, which is slightly less than in 2018, we believe that our parliamentary bloc has won the elections,” said Rindala Jabbour, spokesperson for the FPM, expecting the Tashnag (three seats) and the newly elected Sunni pro-Syrian regime MP for Akkar, Mohammad Yehya, will join their block.

Meanwhile, Charles Jabbour, head of the LF communication office, said, “The May 15 elections have settled everything. The general popular trend, Christian and Muslim, has decided against the FPM and Hezbollah’s project, which undermines the state’s prerogatives.”

The FPM has certainly lost some of its glory. It has, however, limited the damage in an electoral context that was unfavorable to it, since the financial collapse, the confiscation of depositors’ savings and the popular uprising of Oct. 17, 2019, not to mention the Aug. 4, 2020, Beirut port explosion.

“FPM leader Gebran Bassil has suffered the brunt of the post-Oct. 17 period. He was booed in the street, demonized, humiliated, yet he managed to stand his ground and achieve an honorable score for the presidential party,” said Rindala Jabbour.

The May 15 polls, however, may have sounded the death knell of Bassil’s candidacy for the presidential race.

“The party’s poor results are a sign that the Aounist time in power is coming to an end. The FPM leader’s presidential chance is almost over,” Joseph Bahout, a political scientist, told L’Orient-Le Jour.

The LF can now content itself with the fact that Hezbollah and its allies have most likely lost their majority in Parliament.

Samir Geagea’s party could turn the tide in the legislature if it managed to forge new alliances with its long-standing allies (the March 14, Kataeb, the Progressive Socialist Party and the old Future Movement figures, with 22 seats) but also with members of the opposition groups or independent candidates aligned with the Oct. 17 uprising (13 seats).

No clear majority emerged from this election.

Despite the popular anger against the ruling class in 2019, its role in propelling Aoun to the presidency in 2016, and participation in Saad Hariri’s government of 2018 preceding the financial collapse, the LF managed to seduce voters, and not only its supporters.

For some analysts, this victory goes beyond the battle between LF and FPM.

“It also represents a failure for the Kataeb party, which had hoped to carry weight in Parliament, to the point of forming a bloc with independent and opposition MPs,” Bahout said.

Aware that the wind was in its favor, given the people’s anger against the presidential clan and Hezbollah’s weapons, the LF had considerably raised its tone during the election campaign, making the fight against Hezbollah’s illegal arsenal and against the influence of the Iranian regime their battle horse.

Geagea’s party attempted to position itself as the most effective protector of the Christian community and country’s sovereignty. Beirut’s Tayyouneh clashes –– shootings between Amal Movement, Hezbollah supporters and armed men allegedly belonging to the LF –– in October 2021 is the most striking example of this.

The pertinent question is: What will the LF do with this victory, knowing that the battle for the Christian leadership is being played out today, with institutional deadlines in sight, notably the election of the head of Parliament, the government’s formation, and the presidential election in October?

“As the Lebanese crisis becomes institutionalized, is the LF-led anti-Hezbollah bloc heading toward a deadlock or a compromise?” Jamil Moawad, a political analyst, asked.

It is in the context of a potential return to extreme polarization in Parliament that the race for the Christian leadership is played out today.

This is a polarization between two diametrically-opposed projects — one project that claims to be sovereigntist of the March 14 camp, the LF and their allies, and the other is that of the March 8 alliance.

Certainly, the time of confrontation has come. The LF did not fail to announce it throughout their campaign, promising to keep going down the same path — a confrontation with their sworn opponent, Hezbollah, but also the FPM.

“Our project consists in part in a confrontation against the illegal armament of Hezbollah, its positioning in the Iranian axis, its violation of the Constitution, while we advocate neutrality and the rule of law,” Charles Jabbour, from the LF office, said.

“We will also lead a confrontation concerning the FPM, a Christian party, which for the first time in history, has adopted an anti-democratic, anti-sovereigntist and anti-constitutional line, while also damaging Lebanon’s relations with the international community,” he added.

For former Minister of Interior and Municipalities in two consecutive cabinets, former Prime Ministers Fouad Siniora and Saad Hariri, as well as legal expert Ziyad Baroud, however, the Christian battle is not necessarily a negative sign.

“This battle is positive. It is proof of a diversity and a democratic exercise among Christians,” Baroud told L’Orient-Le Jour, as he also recognized the high risks of political paralysis.

While the analysis of the Christian vote is awaited to better study the representativeness of each of the two major Christian parties, some indicators do not deceive, such as “the resounding victory of Antoine Habchi, LF candidate of Baalbek-Hermel, a stronghold of Hezbollah, with 17,000 votes.”

Everything will now be played out according to the alliances of the two Christian major parties, depending on the issues, whether sovereign or not. One thing is certain, the next stage promises to be turbulent, as were the supporters of the two camps on polling day.

With 19 seats compared to 15 in 2018, the Lebanese Forces won a victory in the May 15 legislative elections.It was a victory first against its long-time Christian opponent, the Free Patriotic Movement, which lost momentum in its race to the Parliament chamber, with 17 seats now compared to 18 in 2018.This makes the LF the strongest Christian party in Parliament, overtaking by two seats the party...