While all the political players are engaged in a tug of war over the shape of the future cabinet, Prime Minister Najib Mikati appears to be willing to be reappointed to his post 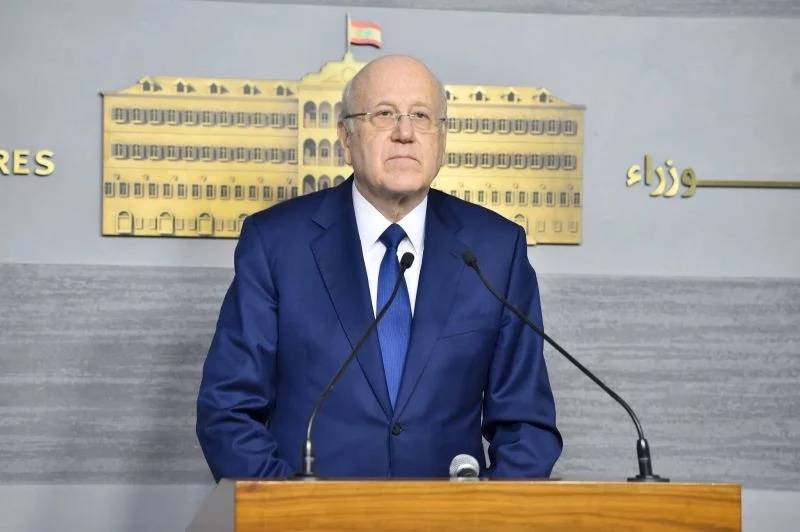 Outgoing Prime Minister Najib Mikati at the Serail on May 20, 2022. (Credit: Dalati and Nohra)

“From a constitutional point of view, and in case of maneuvers to block the formation of a new government, the president should not hand over his prerogatives to a caretaker government, which is not competent in this regard,” Jamil Sayyed, a pro-Syrian MP for Baalbek-Hermel, said on Monday on the sidelines of a meeting with President Michel Aoun — a statement that is far from being a simple expression of personal opinion.

While they have no constitutional value, these remarks may be indicative — especially since they were made from the Baabda Presidential Palace — of a governmental paralysis toward which the country might be heading, only five months out from the end of the president’s terms, expiring on Oct. 31.

Efforts are being made to ensure that outgoing Parliament Speaker Nabih Berri is comfortably re-elected. Meanwhile, several stakeholders are already preparing for a tougher battle that is just around the corner: that of forming the new ministerial team.

This is a tug of war that promises to be particularly difficult between the two camps that emerged from the legislative process, the pro and anti-Hezbollah.

It is the leader of the Free Patriotic Movement, Gebran Bassil, who got the ball rolling, two days after the election.

“Bye-bye to the government of technocrats,” he said at a press conference held at the party’s headquarters in Sin el-Fil.

Bassil believes that the future cabinet must “respect the popular legitimacy” that the various political groups obtained in the elections — a clear call for the formation of a national unity cabinet.

Meanwhile, the leader of the Lebanese Forces, Samir Geagea, does not share this point of view, now that he has the “largest Christian parliamentary group” that his party, with its allies, has just formed.

“Past experiences have proven the failure of the opposing camp to govern the country and carry out the reforms needed to get it out of the current stagnation,” the source added.

Hezbollah ‘does not want to rush things’

It is in this tense context that the head of Hezbollah’s parliamentary bloc Mohammad Raad dropped a bombshell by insinuating that his party might not take part in the future cabinet.

In a speech on Sunday, he said that his party “does not want to rush things.”

This is one of the few times that Hezbollah, which, alongside the Amal Movement, monopolizes the representation of the Shiite community, raises the possibility of not being part of the future government.

This is an option that many observers rule out, arguing that such statements are part of the game of tug of war that precedes any agreement on the composition of the future cabinet.

For their part, MPs from the protest movement have a different view.

“We will not take part in a cabinet with political coloration,” said Halimé Kaakour, an MP from Chouf, whose name was recently mentioned for the post of prime minister.

“I am not running for the premiership because I am against a dual mandate,” she told L’Orient-Le Jour.

According to her, all the elected MPs representing the thawra (revolution) are against the establishment of a political government, i.e. one formed of ministers based on party affiliation instead of based on their technical qualifications for each position.

For his part, Marc Daou, MP for Aley, said,“The time has come for a team of technocratic and independent specialists [to take over].”

The pertinent question, however, is: Could the reappointment of Najib Mikati as the head of government be the answer to spare the country an untimely crisis?

This comes amid comments attributed by the local press to Aoun who “has no problem renewing the confidence granted to the Mikati government if the political players approve this option.”

“The Constitution does not mention the possibility of bailing out a caretaker government. However, a new cabinet must be formed," said Ziyad Baroud, legal expert and the former interior minister.

“This is only a proposal that could be put on the table in case a new cabinet cannot be set up,” said a source close to Baabda, stressing that Aoun would like to see a government formed without delay.

He added that the president is, however, waiting for a Parliament speaker to be elected before setting a date for binding parliamentary consultations to appoint a prime minister.

These remarks attributed to the head of state come at a time when relations between the outgoing premier and the presidential camp have become “tense” in recent days.

This is evidenced by the war of communiqués that broke out between Mikati and Energy Minister Walid Fayad, who is close to the president and the FPM camp.

Fayad was supposed to request the government’s authorization on Friday to sign two contracts with Egypt and Jordan to ensure electricity supply to Lebanon.

He then removed the two offers from the meeting’s agenda, a decision that Mikati appears to believe was pressured by “a political camp,” a jab at the FPM.

Reshuffle of the outgoing government?

In the eyes of several observers, and given the timing, this controversy, which was still going on through yesterday, risks reducing Mikati’s chances of keeping his post.

Others believe that Mikati has gone on the offensive against the presidential camp to show that he is a prime minister capable of standing up to the president and his cronies, in a message mainly addressed to the Arabs, especially Saudi Arabia.

“The head of the [outgoing] government only asked the question of why the two offers were withdrawn. He was not sending any message to anyone,” said Ali Darwish, a former Tripoli MP close to Mikati.

He does not exclude the possibility that the Sunni leader will accept to form the next cabinet, "as he never fails to [fulfill] his national duty.”

Darwish added that the possibility of reshuffling the outgoing government (in case remains in office) has been raised.

But according to information obtained by L’Orient-Le Jour, Hezbollah has expressed its opposition to such a move, calling for the formation of a new cabinet

For the moment, Mikati is traveling to London and he could meet with Western officials before returning to Beirut, according to a well-informed source.

“From a constitutional point of view, and in case of maneuvers to block the formation of a new government, the president should not hand over his prerogatives to a caretaker government, which is not competent in this regard,” Jamil Sayyed, a pro-Syrian MP for Baalbek-Hermel, said on Monday on the sidelines of a meeting with President Michel Aoun — a statement that is far from being a...