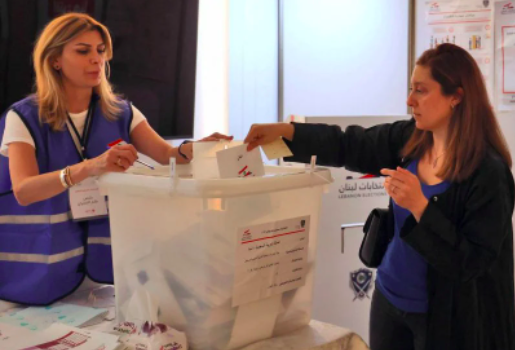 A Lebanese woman votes in Saudi Arabia for the legislative elections on May 6. (Credit: Fayez Nuredldine/AFP)

More than 140,000 non-residents went to the polls to vote in the May 6 and May 8 legislative elections. This is a significant number, which gave the diaspora considerable influence over the results.

This is even more so given that the number of expatriates who cast their ballots is close to or even exceeds the electoral threshold — the number of votes required for a list to win a seat — in some constituencies.

L’Orient-Le Jour takes a deep dive into the diaspora vote in the constituencies where it had the most influence: Beirut I and II, Mount Lebanon II (Metn), Mount Lebanon IV (Chouf-Aley) and North III (Batroun, Bsharri, Koura, Zgharta).

In this constituency, where 6,320 emigrants voted from all over the world, the second seat won by the main list claiming to represent the protest movement was decided by only a few votes.

Cynthia Zarazir was able to join Paula Yacoubian in Parliament through this game of decimals, which worked in the list’s favor. In this case, the diaspora vote was decisive.

This list came first in expat votes, securing more than 35 percent of the total diaspora vote in the district.

The Free Patriotic Movement list came next, with 12 percent of the votes cast by expatriates.

These figures are based on calculations made by L’Orient-Le Jour from the detailed results provided by the Interior Ministry.

Of the 8,261 votes collected by the“Li Watani” list, which represents the Oct. 17, 2019 popular uprising, more than 2,200 votes were from non-residents: mainly from France (where 41 percent of voters voted for this list), the United Arab Emirates (45 percent) and the United States (33 percent).

Support for the protest movement list was even stronger among members of the diaspora in Beirut II, where “Beirut the Change” list managed to elect three MPs with a total of 16,346 expatriates casting their ballots in the district.

Of the 32,823 votes collected by this list, more than 6,600 came from polling stations abroad.

Indeed, 46 percent of expatriate voters gave their vote to the opposition list rather than to the other nine lists in competition. This was followed by the pro-Syrian “To Beirut” list supported by the Ahbash group (15 percent) and the list of Amal and Hezbollah, “Beirut United” (13 percent).

The list supported by former Prime Minister Fouad Siniora came in fourth, with only nine percent of the votes.

The Oct. 17 list achieved the best results in the UAE, where it attracted 74 percent of registered voters. The opposition candidates also performed well in France (57 percent), Saudi Arabia (54 percent) and Canada (43 percent).

As for the Ahbash and the Hezbollah and Amal list, they achieved their best results in Germany (50 percent and 37 percent respectively), Sweden (42 percent and 34 percent) and Australia (33 percent and 16 percent).

In Metn, the opposition list did not succeed in winning a seat, despite strong support from the diaspora.

Indeed, the “Towards the State” list came very close to the electoral threshold, but did not exceed it. However, 32 percent of registered expatriates in Metn voted for this list, or some 2,500 votes.

This is more than the LF list’s tally, which obtained 26 percent of the diaspora votes, and the Kataeb list, which secured 23 percent of the expatriate electorate.

The Aounists came in fourth, with 13 percent of the vote.

The list of Michel Murr, the political heir to the dynasty built by his grandfather, received only 4 percent of the votes cast by expatriates (although it obtained 17 percent of the total votes).

Once again, the opposition candidates received most of their votes from the UAE and France, with 39 percent and 40 percent of the ballots cast respectively.

The main list representing the thawra (revolution), “United for Change,” obtained 48 percent of the non-resident votes, or more than 8,000 votes.

It is followed by the list of the alliance of the LF with the Progressive Socialist Party of Walid Joumblatt (36 percent of the votes) and finally the list of the pro-Hezbollah camp (11 percent).

In Saudi Arabia, the protest list and the March 14 list were neck and neck (46 percent and 43 percent respectively). But the latter had the upper hand in Canada (42 percent vs. 38 percent for the opposition list) and Australia (60 percent vs. 18 percent).

As for the March 8 camp, “The Mountain” list won 97 percent of the votes among the 263 voters in Syria.

The diaspora mobilized the most in this constituency, home to all presidential candidates, which includes the predominantly Christian districts of Batroun, Bsharri, Koura and Zgharta, with 17,447 ballots cast.

However, this momentum did not benefit the protest groups and their “Shamaluna” (Our North) list, as the majority of voters in the diaspora chose the LF.

The LF list received 41 percent of the vote among non-residents, or more than 9,000 votes.

Shamaluna came second, with 17 percent (3,800 votes), followed by the Kataeb list in alliance with Michel Moawad and Majd Harb, which received 15 percent of the vote. The Marada and the Aounists had to make do with 13 percent and 12 percent of the votes, respectively.

The LF list achieved its best results in Australia (54 percent of the vote), Saudi Arabia (49 percent) and the US (48 percent).

The opposition list won the confidence of voters in France and the UAE (38 percent for both).

Notably, Michel Moawad’s list was still in the lead in his stronghold in Zgharta, overtaking the LF and Marada (28 percent vs. 20 percent and 18 percent, respectively).

More than 140,000 non-residents went to the polls to vote in the May 6 and May 8 legislative elections. This is a significant number, which gave the diaspora considerable influence over the results.This is even more so given that the number of expatriates who cast their ballots is close to or even exceeds the electoral threshold — the number of votes required for a list to win a seat — in...