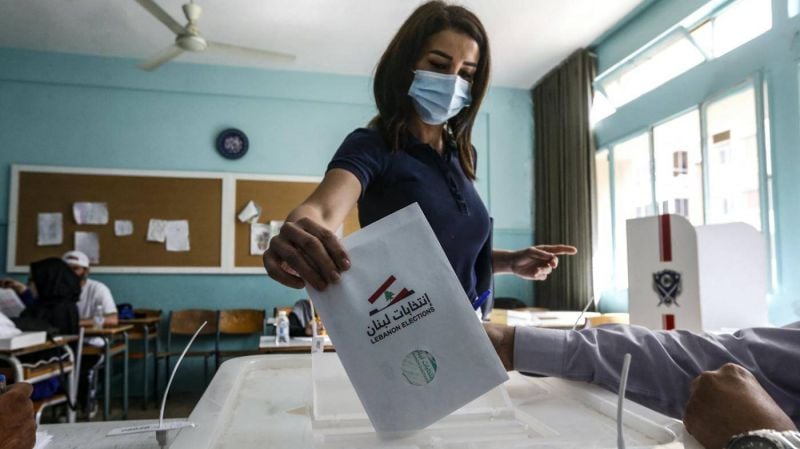 A Lebanese woman casts her ballot as she votes for the parliamentary election at a polling station in Beirut's southern suburbs (Credit: AFP)

Judging by the scarcity of protests, vandalism, road closures or other manifestations of political angst in the immediate wake of last weekend’s parliamentary elections, we can mostly consider the polls a successful democratic exercise. Surely there were winners and losers, but taking a broad view, none of the actors performed so badly as to compel their supporters or patrons to reject the results and take matters into their own hands. Largely, life goes on.

This applies even to the formerly dominant bloc led by the Free Patriotic Movement, who behind its bluster held modest expectations going into the polls, given the difficulty of raising money as a result of US sanctions. They survived and remain the second largest party in Parliament. Their bloc, which includes Hezbollah and Amal, lost about 10 seats, including some MPs infamously considered as Damascus puppets, such as Assaad Hardan and Elie Ferzli. But it’s still a bloc of around 60. They are far from vanquished, and it would be naive to think otherwise. Bragging rights to “the largest party” now belong to the Lebanese Forces. One can only admire their trajectory of growth over the past two parliamentary cycles. It has been disciplined, organized, focused and strategic.

The most talked about result of last weekend’s polls, however, is the election of 13 MPs linked to new independent movements. Several months ago, I wrote in these pages about the fallacy of counting strictly on expat votes, and that producing more than 10 independent MPs would require boosting turnout of apathetic anti-system individuals. In fact, turnout dropped, and it seems to have been the traditional parties who failed to motivate anyone beyond their die-hard supporters. This pleasant surprise enabled the share of anti-system voters, both inside and outside the country, to pass the threshold in almost all districts. The result exceeded almost any expectations.

Much has been said about the dangers of fratricide among anti-system forces. Sadly, divisions cost at least two extra seats, namely in the Mount Lebanon districts of Baabda and Metn, where enough independent votes were cast to cross the threshold, but the scattering among two or more lists kept them out. In other areas, however, such as Beirut II, several strong anti-system candidates actually benefitted by each crossing the threshold on separate lists and then taking extra seats based on the “remainder” of votes left over — an intelligent and well-calculated use of the parameters of the electoral law.

Excitement over the result led to proclamations of “victory for the revolution” filling social media over the past week. Irrational exuberance and political success often go hand in hand, but having seen similar circumstances elsewhere, I hasten to point out that most other countries whose people endured as much hardship over the past four years as the Lebanese did would have produced a far more “revolutionary” result. If the street protests of October 2019 were about rejecting Iranian domination of Lebanon via Hezbollah and its allies, then we can say that they (just barely) succeeded 30 months later. But that is not what the movement said it was about. The “killun” so vigorously denounced still holds well over 100 seats. Equating those lopsided numbers to revolutionary victory in the ballot box reflects political immaturity at best or outright delusion at worst.

No, last week’s elections prove that the change will be incremental, and 13 MPs not beholden to traditional power structures is an excellent start. Their immediate challenge is to find a middle ground between showing a united front on the most important issues, while feeling free to disagree on more contentious ones. Perfect unity should not be the enemy of good cooperation: that is how a healthy coalition functions in a mature parliamentary democracy. For example, an indivisible bloc is imperative when it comes to nominating a parliament speaker and a president of the republic, as well as voting for a prime minster. Beyond that, however, it is utterly foolish to expect hipster environmentalists to agree with conservative Islamists about civil marriage or other peripheral issues. Individual MPs might have strong feelings about their pet topics, but their first concern must be the needs of the citizens themselves. Voters in various districts did not elect these 13 expecting universal consensus, but rather to fight establishment corruption from within, to seek justice for the victims of the Aug. 4, 2020, Beirut port explosion and most of all — to give hope that the country can be saved.

When it comes to such objectives, paralysis of leadership has been a curse since October 2019. Now, however, people around the country can finally identify 13 names as their champions. The ones who will have lasting success will be those who position themselves as leaders and build the clumsily assembled lists of 2022 into real political organizations that can compete in 2026 and beyond. The status of “party” as a dirty word in Lebanon must now be confronted and reversed. Like it or not, well-structured political parties are the only vehicle that can hold power sustainably. The Lebanese Forces understood that; anti-system MPs must do the same.

In practice, this means MPs who ran together on a list officially joining together and speaking as a team in Parliament, just like the traditional parties do. It means setting up an organization and recruiting members that can eventually staff branches around the country. It means endorsing candidates for upcoming municipal elections and supporting them to show momentum of victory. It means attracting technocrats as advisors who can form a “shadow cabinet” and project greater expertise over the coming four years to prepare for the next elections. It means establishing an international profile as opposition leaders who will be taken seriously in foreign capitals as alternatives to the “killun.” And it means raising money to pay for all of that, which is now infinitely easier to do given the proof of success in winning seats.

The 2022 elections did not oust the corrupt political class. But they did prove that the corrupt political class can eventually be ousted. What it will take is a handful of the new crop of MPs to emerge as leaders, to use their parliamentary activities to further inspire voters, to keep their egos in check, to find the balance between passion and discipline, and most of all, to remain realistic. Newly elected independents don’t change the rules of the game. They win the game by understanding how the rules can work for them.

George Ajjan is an international political strategist and a former Republican candidate in the 2004 US House of Representatives elections. He did not work with any candidates or parties in Lebanon for the 2022 elections.

Judging by the scarcity of protests, vandalism, road closures or other manifestations of political angst in the immediate wake of last weekend’s parliamentary elections, we can mostly consider the polls a successful democratic exercise. Surely there were winners and losers, but taking a broad view, none of the actors performed so badly as to compel their supporters or patrons to reject the...