The 40-year-old was elected on the “Li Watani” opposition list in Beirut I for the minority seat with only 486 votes, due to an electoral law that does not always reward the candidate with the most votes 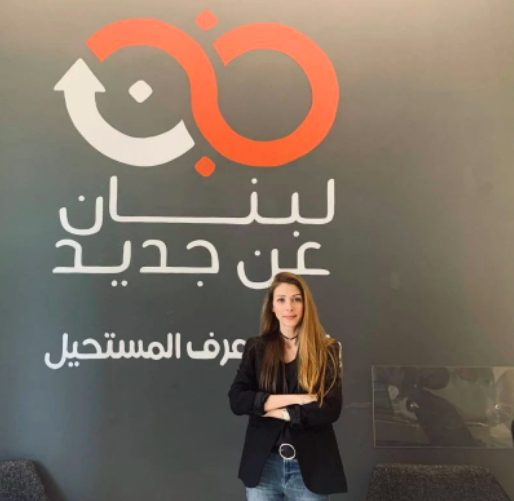 Dressed in jeans, a t-shirt and leather boots, Cynthia Zarazir does not like to “pose” for the camera. She prefers to be natural.

During the electoral campaign, she made rare television appearances with the same air of ease: a woman who has just turned 40 assuming her casual style as if she were making a political statement. To cave in to the classic codes of the milieu would be almost like giving in to the system she intends to fight.

“How was your first time?” This was her taunting question to Lebanese voters on the talk show of Hicham Haddad, as well as on Instagram videos, in which she addressed the Lebanese as if she were trying to provoke a friend, an aunt or the corner “dekkanjeh” [grocery shop owner] in a bid to talk them into voting.

Zarazir does not miss an opportunity to remind us that she has been active in the streets “since she was a kid,” mentioning her successive arrests and her deep involvement in the Oct. 17, 2019, uprising.

Now that she has been elected as MP for the minority seat in Beirut I on the “Li Watani” list, alongside Paula Yakoubian, Zarazir has a new chapter to write in her story.

If she wants to be remembered for one thing, it is the image of a seasoned activist, a freedom-loving heroine of the people who was able to break into the heart of the system — except that for the vast majority of Lebanese, Zarazir is not a celebrity.

Her name does not ring a bell, except for some vaguely recollected controversies concerning a tattoo of President Michel Aoun inked on her neck or a tweet calling for the “genocide of the Syrian people.”

The latter concerns a few words posted “in a fit of anger” in June 2016, following a wave of suicide attacks in the Bekaa, but cost her dearly during her campaign.

For many voters close to the protest movement, Zarazir has no place on a list that claims to call for “change.”

On social networks, some people even called to cut her off by not voting for her slate. She defended herself, tried to explain and apologized profusely.

“The statement does not represent me; it is not me. I made a mistake, and I apologized. I cannot do more than that,” Zarazir said from her office in Beirut’s Sioufi area.

At the time in 2016, when she made the controversial comments, the massive influx of Syrian refugees had just reached its peak. Leaders were riding the wave of fear and emotion. The newcomers were blamed for everything from rising unemployment rates to traffic jams in the country.

The suicide bombers of 2016 were Syrians, and the victims mostly Lebanese civilians. The climate was flaring, and things escalated.

“My response was ugly,” she said regrettably, and appears to have since learned to polish her statements.

“Refugees are the first to suffer from being here,” Zarazir says today.

On this subject, as on the issue of women’s rights, homosexuals or Lebanese detainees in Syrian prisons, she appears to play the humanitarian card.

Apart from a certain liberal, philanthropic and nationalist leaning, one should not look for a strong political or ideological anchor in her speech. There is none.

From the “Club for Human Rights” at the American University of Technology to her commitment to helping the victims of the Aug. 4, 2020, Beirut port explosion, her approach seems non-confrontational, almost too perfect.

But this means to forget about her time with the Free Patriotic Movement, which is the second milestone in her career that does not sit well with many voters.

Until 2006, Zarazir, a former student of Champville school and Val Père Jacques School, was an unconditional supporter of Aoun’s party. In it, she found her values of “freedom [and] opposition to the [Syrian] occupation and corruption.”

When she turned 24, she became disillusioned with a party, which, in her eyes, was not able to keep its promises. She took the decision to break away from it.

Of her youthful years with the FPM, she holds vivid memories of her activism in the street and confrontations with the police.

“We used to distribute flyers, organize sit-ins. We were also arrested many times, sometimes for a few hours, often for several days,” Zarazir told L’Orient-Le Jour.

Controversial or not, she will be entering Parliament in the coming days.

Critics did not stop her momentum, nor did they prevent her victory: Zarazir, originally from Baabda but a resident of Beirut, was elected with only 486 votes, less than some of her rivals competing for the same seat (Elie Khalil Sharbashi on the Lebanese Forces list with 727 votes and Antoine Siryani on the Kataeb-Sehnaoui list with 558 votes).

This is one of the shortcomings of an electoral law that does not always reward the candidate who garners the most votes in the ballot box.

In reality, Zarazir was elected thanks to the low electoral threshold in her constituency and the popularity of some of her running mates who have been working in the field for several years (Paula Yacoubian with 3,524 preferential votes, and Ziad Abichaker with 3,142 votes).

While her team is finalizing its program and working to complete the transformation of its Sioufi offices into a political headquarters, she is taking part in negotiations among the 13 newly elected protest movement MPs to form a parliamentary group.

This includes a few main fixed points, namely a veto on Parliament Speaker Nabih Berri’s re-election to his post, and a collaboration with the rest of the MPs when doing so serves the “good of the country.”

The rest, many “maybes,” looks like a leap into the unknown.

Dressed in jeans, a t-shirt and leather boots, Cynthia Zarazir does not like to “pose” for the camera. She prefers to be natural.During the electoral campaign, she made rare television appearances with the same air of ease: a woman who has just turned 40 assuming her casual style as if she were making a political statement. To cave in to the classic codes of the milieu would be almost like...