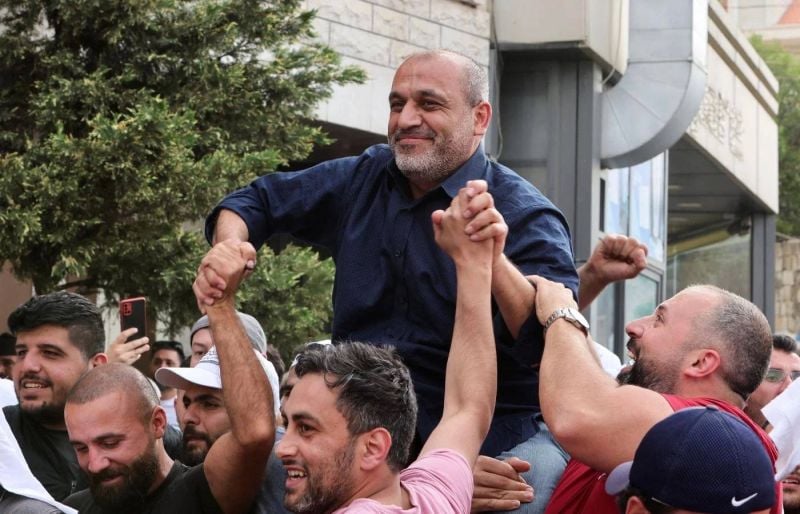 Yassin Yassin being carried by supporters after his win in the 2022 parliamentary elections. (Credit: Reuters)

GAZA, West Bekaa: Yassin Yassin, a political newcomer on the main protest movement list, "Sahlouna wal Jabal," which contributed to unseating Deputy Speaker Elie Ferzli in the West Bekaa-Rashaya, has been called many things during his campaign. Businessman. Revolutionary. Islamist.

“I’m a lot of things,” an engaging yet relaxed Yassin, told L’Orient Today in the family room of his big but somehow still cozy home in Gaza, surrounded by green and with a spectacular view of the mountains, “but Islamist is not one of them.”

The term was used to describe him when a video of him circulated on social media in which he proudly announced that he would not vote for projects that contradict Islamic sharia [jurisprudence].

“I did that on purpose,” he said with a smile, “a little nuclear bomb to try to trigger my attackers.”

Yassin, who won 6,004 preferential votes in the contest, says that his political opponents were using the stance of his party, Sahlouna wal Jabal, on civil marriage against him.

“They said I was pro-civil marriage, pro-destroying the family. Look, I agree with them [Sahlouna wal Jabal] 95 percent of the time or more, but on this specific part I don’t agree. And, although I knew many would consider it a taboo and politically incorrect, I had to show that I would never go against what I believe in first, and what they [my supporters] believe in, as I represent them.” 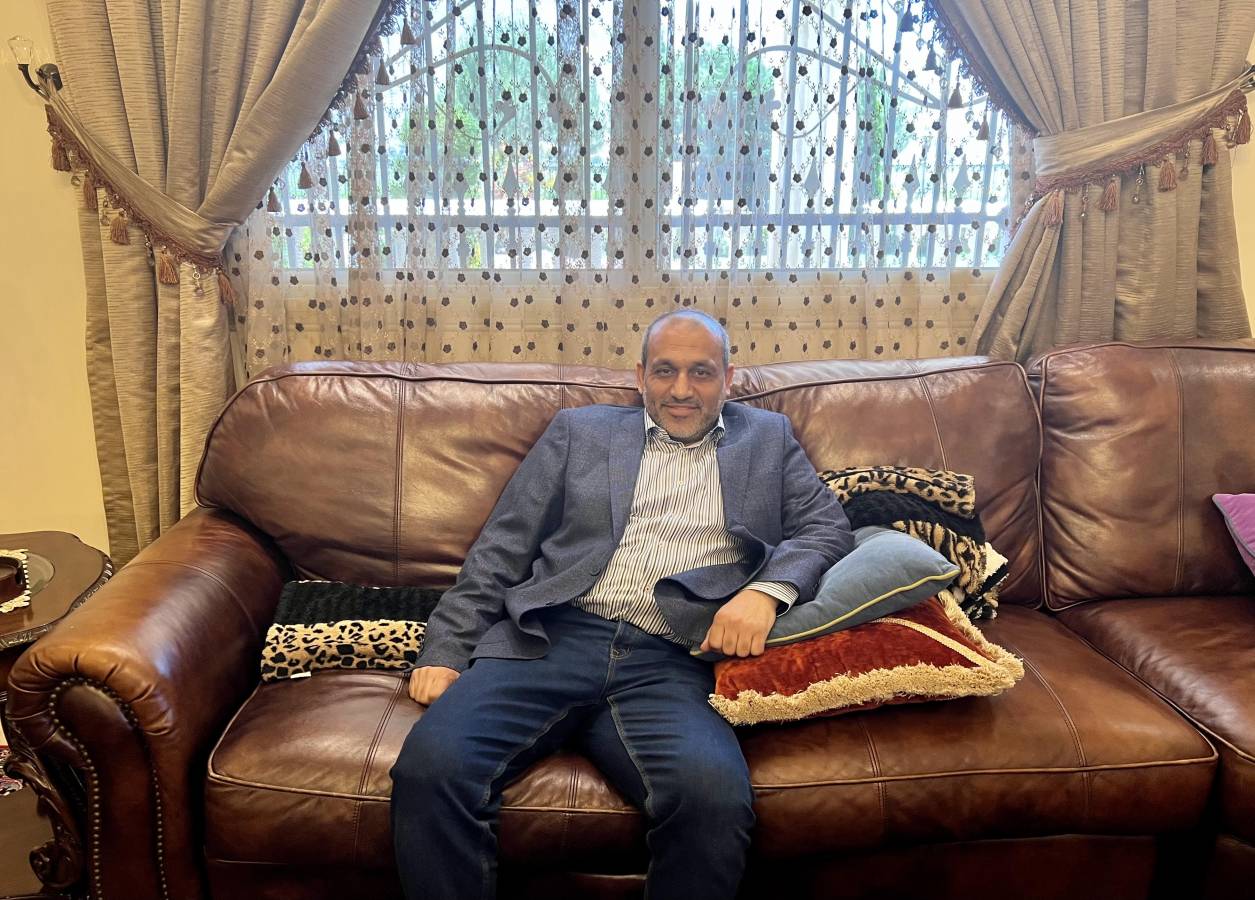 While Yassin doesn’t really understand the hoopla surrounding his stance on civil marriage — one that, he says, is shared by the majority of Lebanese, regardless of their sect — others believe that such a stance contradicts his self-professed plans to build a civil state with the rest of the opposition MPs.

“Although I was pleasantly surprised by Yassin’s stances, for instance him referring to the war in Syria as a rightful revolution, and his line of thinking is clearly influenced by the strong Nasserist pan-Arabist perspective that is very much instilled in people growing up in the West Bekaa, his stance on civil marriage is an issue,” said Nadim El Kak, a researcher with The Policy Initiative, who happens to hail from the same region as Yassin. “His conservative views on civil marriage are very close to Muslim political organizations and other religious authorities. How does that rhyme with wanting a civil state? It makes me wonder what his stance is on other components of personal status law. If he’s against civil marriage, does that mean he’s not interested in reforming religious courts at all?”

“I really don’t see how not supporting civil marriage contradicts wanting to build a civil state. Don’t we want a democratic system? And if those who voted for me are against this specific issue but are with 95 percent of everything else …” he said.

“I believe that the Bloc of Change [comprised of Yassin and the other 12 MPs associated with the protest movement] stands for more pressing things — like providing electricity and clean water and resurrecting our industry to create badly needed jobs, building the judicial system and preventing our youth from leaving the country in droves. Is [civil marriage] really something to focus on right now?”

In fact, Yassin said, when he went around talking to people in the 32 towns of his region allocated to his sect (of 65 towns in total) the top two questions were: “Why are you so divided? Imagine what you could gain if you were united as a change movement.” and “What are you going to do about the water? Which brings electricity and which facilitates farming.”

These issues have been plaguing Lebanon for decades. How does Yassin plan to fight the traditional political parties, who have profited greatly from not intervening and letting these issues implode?

“We will tackle them as an opposition bloc. We have now met twice since the elections and we are in agreement about where our priorities lie and how we should stand united behind the laws that will fix this country,” Yassin said.

“Actually, many draft laws and other documents already exist. They were drawn up and thrown in a drawer. We will dig them up, dust them off and do everything in our power as a bloc to make sure they are passed.”

Another thing Kak noticed about Yassin is what he refers to as “the old businessman way of playing politics.”

“While there are many videos of Yassin screaming in squares all over the Bekaa during the popular uprisings of October 2019, talking about people’s deprivation and poverty,” Kak said, “it’s really important to know that this guy has a lot of money, part of which comes from investments he made by taking over some of the properties and assets of [former PM Saad] Hariri. Not to mention the fact that he employs over 1,000 people in the area: that’s 1,000 families that he’s feeding. However, constituents over there prefer that over the program of, say, [Citizens in a State], because Yassin Yassin is someone new who speaks a very populist language and who has money to support his political endeavors because he’s able to help families in need.”

“I am not Saad Hariri,” Yassin said. “He called me during the revolution and said: 'I thought I was your close friend. Why are you doing this? You have a future with us.' And, look, on a friendship level I love the guy, but I politely declined meeting with him about a position with the party because at that point the October Revolution already ran in my blood to a point that I was fully dedicated to it.”

While he doesn’t deny having a lot of money, Yassin said that he can in many ways relate to the pain of those in his community. He wasn’t just handed his fortune — his father and grandfather were farmers.

“I am a son of Gaza, of the West Bekaa, of Lebanon,” Yassin said. “And I could’ve stayed in the United States to focus on expanding that fortune, but something called me back seven years ago. It was my personal revolution. The revolution of October 17 strengthened that and showed me there was hope. And now I’ve reached Parliament with like-minded people who want what’s best for Lebanon."

His eyes well up. “How can you not believe that was meant to be?”

CLARIFICATION: A previous version of this article stated that Yassin Yassin had unseated Elie Ferzli. While Yassin's list took votes from Ferzli's list and thus contributed to the loss of his seat, Yassin did not directly unseat Ferzli.

GAZA, West Bekaa: Yassin Yassin, a political newcomer on the main protest movement list, "Sahlouna wal Jabal," which contributed to unseating Deputy Speaker Elie Ferzli in the West Bekaa-Rashaya, has been called many things during his campaign. Businessman. Revolutionary. Islamist.“I’m a lot of things,” an engaging yet relaxed Yassin, told L’Orient Today in the family room of his big but...