An analysis of the dynamics within each community, the scores of the thawra (revolution) and the perverse effects of the electoral law 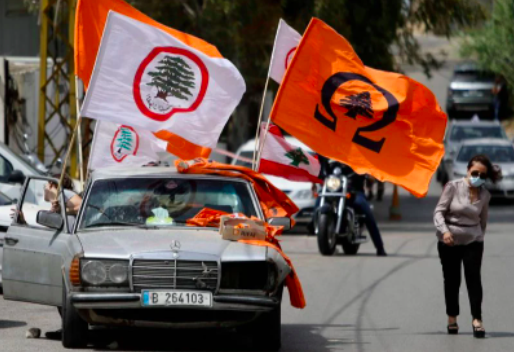 The flags of the Lebanese Forces (left) and the Free Patriotic Movement (right), two rivals on the Christian scene, flying the same car on May 15, 2022, during the legislative elections. (Credit: Ibrahim Chaloub/AFP)

1-The thawra, a player in all constituencies

The 13 MPs claiming to represent the Oct. 17, 2019, protest movement were elected in seven of the 15 constituencies. But the lists, considering themselves as part of the thawra, managed to impose themselves on the political landscape throughout the country.

In the North I constituency (Akkar), the three lists representing the protest movement obtained a combined score of 16,410 votes, or some 11 percent of the votes.

Similarly, in the Mount Lebanon II constituency (Metn), the protest movement’s list was close to meeting the electoral threshold, winning 11,555 votes, or 12.4 percent of the votes. Moreover, journalist Jad Ghosn, the unsuccessful candidate running on the popular uprising’s list in this district, obtained more than 8,500 votes, a score that put him in second place among the Maronite candidates in Metn.

In the Mount Lebanon III constituency (Baabda), the four lists that are close to the Oct. 17 protest movement have collected a total of 19,902 votes, or nearly 23 percent of the vote. Once again, Michel Helou (former executive director of L’Orient-Le Jour) did not win although he obtained 5,500 preferential votes, placing him in third place among the Maronite candidates, well ahead of Camille Chamoun (about 1,500 votes), who was eventually elected.

In the Bekaa I constituency (Zahle), too, all the opposition lists received a total of 10,801 votes, or some 12 percent of the vote.

Finally, even in Nabih Berri’s stronghold, in the South II constituency, the two opposition lists obtained more than 17,000 votes, the equivalent of 10.7 percent of the total votes in this constituency.

As for the districts where the thawra lists made a breakthrough, some candidates stood out, after having obtained a particularly high score. This is the case, for example, of Marc Daou, elected Druze MP in Aley with 11,656 votes, overtaking Walid Joumblatt’s Progressive Socialist Party’s candidate, Akram Chehayeb, (11,373 votes) and Lebanese Democratic Party head Talal Arslan (9,008 votes).

Similarly, Ibrahim Mneimneh, one of the protest movement’s candidates in the Beirut II constituency, obtained 13,281 votes, topping the podium among Sunni candidates in this district of the capital.

In Beirut as elsewhere, the withdrawal of Future Movement leader Saad Hariri has divided Sunni public opinion, split-up that took place at the expense of traditional Sunni political figures. In the Beirut II constituency, former Prime Minister Fouad Siniora failed to put forward an alternative Sunni leadership in the capital. His candidate and the “Beirut Confronts” list head, former Minister Khaled Kabbani, obtained only 3,433 votes, a score that placed him in ninth place among Sunni candidates in the capital, behind the independent or protest movement figures.

The same is true in Tripoli, where the traditional leaderships suffered a major setback. Former MP and Vice President of the Future Movement Mustapha Alloush could not be elected, having received only a modest number of preferential votes (3,730).

The same is true for incumbent Syria-aligned MP Faisal Karami, who comes from a Tripolitan family with long political lineage, who was disqualified, having received only 6,494 votes, compared to more than 7,100 votes in 2018.

The ballot boxes were also merciless towards Prime Minister Najib Mikati. Indeed, the list he backed in the northern capital obtained only 16,215 votes, a score significantly lower than in 2018 (42,019 votes).

This decline benefited the hawk of the so-called “sovereignist” camp, Ashraf Rifi, who came first among the Sunni candidates in Tripoli, with 11,593 preferential votes. The former general director of the Internal Security Forces doubled his score compared to 2018, when he received 5,931 votes, which back then was not enough to secure his election. Businessman Ihab Matar’s list (two seats) and the protest movement (one seat for Ramy Fanj) also benefited from the traditional leadership’s decline in the northern capital.

Finally, in Saida, Bahia Hariri’s indifference to the election prevented Yousef Naqib, her former right-hand man, supported by Siniora and Al-Jamaa al-Islamiya, from making his way into Parliament, having obtained only 4,380 votes.

While Osama Saad, the head of the Popular Nasserite Organization, kept his seat. Without the support of Hezbollah and Amal this time (he went from 9,880 votes down to 7,341), it was Abdul Rahman Bizri, a leading doctor in the fight against COVID-19, who created the surprise. This former mayor of Saida garnered 8,526 votes, more than double his score in 2018 (3,509), which placed him in first place among the candidates in the South I constituency (Saida-Jezzine).

3-On the Shiite scene, Amal shrinks and Hezbollah grows

The South I constituency is among those districts where the Amal movement recorded its worst score: The list of Nabih Berri, who considered Jezzine as his stronghold, failed to meet the electoral threshold. Ibrahim Azar, Amal’s candidate in this southern district, who had alone obtained 11,663 votes in 2018, received only 7,894 votes. This decline is far from being an isolated phenomenon.

In the Beirut II constituency, Mohammwd Khawajah, Amal’s candidate for one of the two Shiite seats, was certainly re-elected, but he did not come out unscathed. He went from 7,834 votes in 2018 to only 5,789 votes.

In the South III constituency, Ali Hassan Khalil (Shiite) and Qassem Hashem (Sunni), both candidates of the Amal Movement founded by Moussa Sader, lost several thousand preferential votes each, dropping from 16,765 and 6,012 votes respectively to 13,155 and 1,215. The total preferential votes received by Amal’s candidates is 186,811, compared to 197,852 in 2018.

This sign points at a popularity decline. Against the backdrop of the economic crisis, did large segments of the population hold the Amal Movement responsible for being at the heart of the endemic corruption in the country? Or did Hezbollah redistribute its voters to protect itself from any breakthrough, or to send political messages?

Pro-Hezbollah independent MP Jamil al-Sayyed, who is highly critical of the alliance with Berri and hopes to become Parliament speaker, went from 33,223 votes to only 11,705 in the Bekaa III constituency (Baalbek-Hermel).

In contrast, Hussein Hajj Hasan (Shiite), a candidate running in the same constituency, went from 15,662 votes in 2018 to 23,120. Mohammad Raad, head of Hezbollah’s parliamentary bloc and candidate in Nabatieh (one of the districts in the South III constituency, along with Bint Jbeil and Marjayoun-Hasbaya), also went from 43,797 to 48,543 votes, which widened the gap with Berri (some 42,000 votes in 2018 and 2022) on the Shiite scene.

The score of Ali Fayyad (Shiite from Marjayoun-Hasbaya), who ran on the same list, increased from 27,460 votes to 37,047. While Hezbollah managed to prevent the protest movement’s candidates from making any breakthrough on the Shiite scene, they still managed to impose two candidates in the South III constituency: Firas Hamdan (Druze, 4,859 votes) and Elias Jaradeh (Greek Orthodox, 9,218 votes).

Besides Elias Jaradeh, only five Christian candidates claim to be part of the protest movement were elected out of the 64 seats reserved for Christian communities. Indeed, and despite the shift in the balance of power between the LF and FPM, which did not come out unscathed, the Christian public opinion comforted its traditional figures, which the numbers clearly show.

However, the LF’s gains were shared equally with the other traditional parties and families in the district (the Murr family, the FPM and the Kataeb). This is also the case in the Mount Lebanon I constituency (Jbeil-Kesrouan), where the main Christian figures were re-elected: the FPM replaced Roger Azar with former Energy Minister Nada Boustani, and the seat of Chamel Roukouz (whose votes dropped from 7,300 votes in 2018 to some 600 votes in 2022) went to Kataeb Vice President Salim Sayegh.

The same goes for the North III constituency (Batroun-Bsharri-Koura-Zgharta), where the traditional figures of this Christian constituency par excellence kept their seats, despite a slight rebalancing.

Thus, LF candidate Ghayath Yazbeck defied Gebran Bassil in his stronghold in Batroun, and obtained 11,094 votes vs 8,922 for the orange party’s leader.

Michel Moawad topped the podium in Zgharta, beating Marada representative Tony Frangieh (9,261 vs 8,945). The Marada party also succeeded in electing Melhem Tawk in Bsharri, an uncontested LF stronghold until then, despite his low score in terms of preferential votes (3,566), while LF candidate Joseph Ishac received 6,391 votes.

5-The perverse effects of the electoral law exposed

The 2022 elections, the second poll since the proportional representation law was adopted in 2017, has once again exposed some of the law’s inconsistencies.

The “perverse effects” of the electoral law are raised when one candidate loses to another who has received way less preferential votes than he or she has, even though they both ran on a list that met the electoral threshold.

This phenomenon, which was already present in 2018, was amplified this time. In addition to the above-mentioned examples, it is possible to identify several others.

In Tripoli, the Greek Orthodox seat went to Jamil Abboud, a candidate on former minister Ashraf Rifi’s list, who obtained only 79 votes. However, he was beaten by three other candidates in his constituency, including Rafli Diab, a Marada candidate who received some 2,300 votes.

In Akkar, Ahmad Rustom, an Alawite candidate on the list of candidates formerly aligned with Hariri, was elected with only 324 votes, while Haidar Issa, his competitor on the FPM list, got 3,948 votes.

In the Beirut I constituency, Cynthia Zarazeer, who ran on the protest movement’s list, won the minority seat with only 486 votes. She was the third candidate qualified for this seat, after Elie Charbachi (LF, 727 votes) and Antoine Siryani (independent, 558).

Finally, in the Beirut II constituency, FPM candidate Edgar Traboulsi was allotted the Protestant seat with only 2,053 votes against 3,272 votes for the opposition’s candidate Nohad Yazbek. As a result, as soon as the election was over, prominent political figures called for revisiting the electoral law, including Marada party head Sleiman Frangieh, and Nabih Berri.