With the return of Faisal Karami, Hezbollah is trying to set up a heavyweight Sunni parliamentary bloc aligned with its projects. 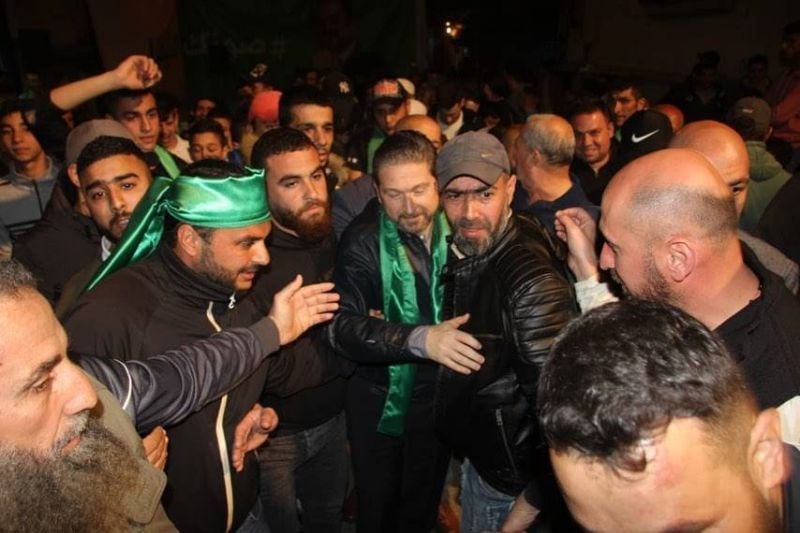 Sunni MP for Tripoli Faisal Karami surrounded by his supporters in April 2022, a few weeks before the legislative elections. (Courtesy of Faisal Karami via Facebook)

Hezbollah appears to be quietly trying to pull strings within the Sunni community.

Hezbollah is in fact trying to make up for the opportunity it missed in the May legislative elections, during which it failed to pull some Sunni officials to its side, which would have strengthened its camps in the current battle to elect a new president.

To achieve this objective, Hassan Nasrallah’s party is counting on the shaky Sunni landscape in the absence of a real leadership since former Prime Minister Saad Hariri stepped down from political life in January.

The party seems also to be taking advantage of the fact that many MPs are ostensibly guided by personal interests and political ambitions that they want to be realized at all costs.

For several months now, Hezbollah has been active in the Sunni community on a social level.

The incident of Tleil, in Akkar, was the most obvious example. In August 2021, an illegal gas tank exploded, causing the death of about 30 people and injuring some hundred others.

In the aftermath of the disaster, no Sunni leaders headed to the impoverished, predominantly Sunni area in the north, but a Hezbollah delegation was quick to visit the relatives of the victims and distribute financial and medical aid— a measure that continues in Akkar and Tripoli today, much to the indifference of local and other Sunni leaders.

Politically, Hezbollah is trying to build a large Sunni bloc that would be aligned with the party.

Hezbollah’s chances of accomplishing this task were greatly strengthened after the Constitutional Council voted to replace Forces of Change MP Rami Fanj's parliamentary seat with that of Tripoli leader, MP Faisal Karami, who is close to the pro-Iranian party.

Karami was quick to act. He met with Grand Mufti Abdel-Latif Derian before his tour among Sunni MPs.

“Karami is already acting as if he were the Sunni reference in Parliament, capitalizing on his status as heir to an important political family— his father and uncle were prime ministers,” a Sunni figure in the March 14 camp told L’Orient-Le Jour on condition of anonymity.

“He also appears to act as if he has won the leadership in Tripoli, a very important issue in the eyes of Hezbollah,” the source added.

The head of the Dignity Movement wants to consolidate his position in the Sunni community based on his good relations with Hezbollah, but also with Saudi Arabia — including Saudi ambassador Walid Bukhari, who met with Karami in Tripoli a few months ago.

Commenting on his re-election, Karami was swift to point out that “the split between the March 8 camp and March 14 camp is over,” a message that seemed to signal a new chapter in his political activity, outside the traditional alignments.

On Thursday, Parliament convened once again for an eighth attempt to elect a president, but to no avail. This was Karami’s first parliamentary session, during which he wrote, “the compromise” on his ballot.

He seemingly tried to distinguish himself from the rest of the March 8 MPs, who voted blank. At the same time, he presents himself as a unifying figure within his community, without failing to highlight his alignment with Hezbollah’s strategy, which is to reach a national compromise around the name of the new president.

In the event that pro-Syrian Ahbash MPs Taha Naji and Adnan Traboulsi also decide to come on board, the number of the MPs in such a bloc would amount to 10, making it the largest Sunni-majority parliamentarian group aligned with Hezbollah— a powerful weapon in the Shiite party’s hands, especially against the scattered Sunni MPs.

Those MPs do not support the same presidential candidate and did not show unity when appointing a prime minister.

“These Sunni MPs are just waiting for the right moment to decide. Some of them support the candidacy of army chief Joseph Aoun,” the aforementioned March 14 official said. “A dozen MPs have already visited him recently. Another group supports the candidacy of Sleiman Frangieh, thus joining the Sunni deputies close to Hezbollah.”

Mikati, who also hails from Tripoli, has been praising Frangieh for several days, publicly displaying his support for his presidential candidacy.

“When the candidacy [of Frangieh] becomes serious, the Sunni MPs will take a position that serves the national interest,” the premier said in a recently televised interview, stressing that Frangieh and Parliament Speaker Nabih Berri could form a “winning duo.”

“Najib Mikati wants to pull the rug from under Karami’s feet, especially since both men claim Sunni leadership in Tripoli and therefore want to maintain good relations with Frangieh,” a source close to Hezbollah, who did not wish to be named, told L’Orient-Le Jour.

“With these statements, Mikati is trying to present himself as the best fit in a ruling troika that could include Frangieh, alongside Berri,” the source added.

In the anti-Hezbollah camp, however, the situation remains ambiguous.

First of all, there is the National Moderation bloc, which brings together MPs from Akkar and the North, who still do not have any clear political position vis-à-vis a Sunni parliamentary bloc.

In Beirut, three Sunni figures are trying to consolidate their influence, each with the Grand Serail in their sights: MP Fouad Makhzoumi, who is trying to create a political grouping beyond his National Dialogue party; his colleague in Parliament Nabil Badr, who is trying to unite elected officials around him; and former Economy Minister Mohammad Choucair, who wants to form a political and economic bloc.

In the absence of leadership and a unified political line within the community, these initiatives amplify the Sunni scatteredness, thus strengthening Hezbollah’s position.

“Even if Hezbollah succeeds in forming a Sunni parliamentary bloc around Faisal Karami, it will not be able to reverse the balance of power to its advantage,” a March 14 figure told L’Orient-Le Jour on condition of anonymity.

Indeed, Hezbollah will not be able to sway the election of a president or appoint a prime minister without the endorsement of Arab and Western countries. Otherwise, it will have to bear alone the responsibility for the continuation of the socio-economic collapse.

But the party does not wish to repeat the failed scenario of former Prime Minister Hassan Diab, who led a government mainly from the March 8 camp at the beginning of the crisis in 2019.

Hezbollah is currently working to consolidate its position in anticipation of a possible compromise endorsed by Arab countries, particularly Saudi Arabia, on the Lebanese issue.

However, in the event of a regional escalation, Hezbollah could adopt a more rigid position. It could increase pressure to elect one of its allies as head of state while threatening to impose Karami as a prime minister.

Hezbollah appears to be quietly trying to pull strings within the Sunni community.Hezbollah is in fact trying to make up for the opportunity it missed in the May legislative elections, during which it failed to pull some Sunni officials to its side, which would have strengthened its camps in the current battle to elect a new president.To achieve this objective, Hassan Nasrallah’s party is...