Kataeb Secretary-General Serge Dagher claims that the meeting with a Hezbollah official was of “social” nature. Hezbollah, meanwhile, says “topics of disagreement” were on the discussion table with the Saifi-based party. 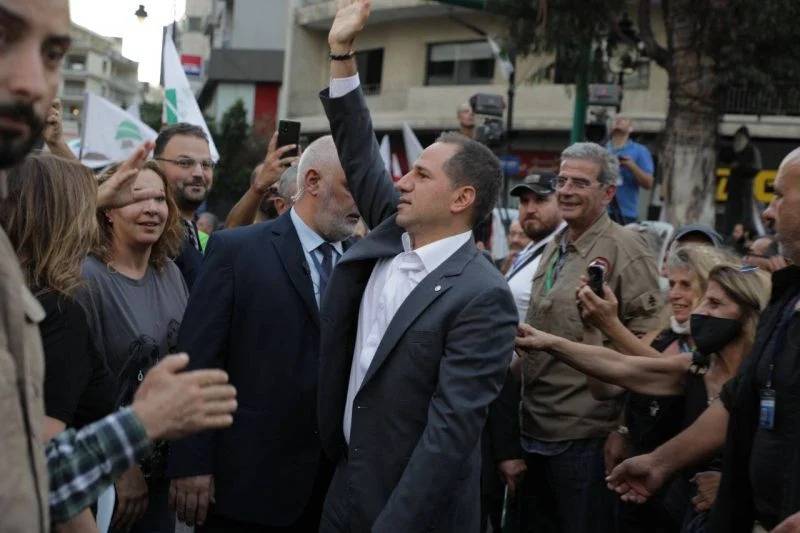 Kataeb leader Sami Gemayel waves to a crowd in Achrafieh in Sept. 2022, during the commemoration of the 40th anniversary of the assassination of Bachir Gemayel. (Courtesy of: Kataeb website)

What were the Kataeb doing in the southern suburb of Beirut? The question arose since information leaked to the press about a purported closed-door meeting last week between Serge Dagher, the Kataeb secretary-general, and Hezbollah officials and MPs, reportedly requested by the Kataeb.

The leak seems to have embarrassed Saifi, the Kataeb headquarters, in the middle of discussions over Lebanon’s next president.

The party of Sami Gemayel is indeed in frontal opposition to Hezbollah, speaking out against what it calls the political class’ drumming with the pro-Iranian movement.

“If Hezbollah continues to act as it does, we will be heading for a divorce with it,” Gemayel said two weeks ago.

It appears that the meeting, which was first reported by the Hezbollah-aligned Al Akhbar newspaper, caused some embarrassment to the Kataeb party, which was quick to issue a statement denying it had occurred.

“The information in Al Akhbar is false. If the Kataeb decided to participate in a political dialogue with any party, we will announce it loud and clear,” said a statement issued Monday.

Hezbollah, however, stressed that the meeting did take place.

“We welcomed Serge Dagher last week in our offices,” Hezbollah spokesperson Mohammad Afif told L’Orient-Le Jour. “This is not the first meeting between the two parties, but rather the sixth meeting with the Kataeb in recent years.”

While the Kataeb is no longer denying the information so categorically, the party seems to be more nuanced in the aftermath of the statement.

“Yes, I met with Abu Said Khansa last week,” Dagher told L’Orient-Le Jour. Khansa is responsible for Christian relations within Hezbollah. “When members of two different parties meet, it does not mean that a political dialogue is underway.”

He added: “The meeting was mainly of a social nature. I have known Mr. Khansa for years and we discussed many topics, such as religion, culture and politics.”

Meanwhile, a Kataeb leader told L’Orient-Le Jour on condition of anonymity, “We are not accountable for meetings of a personal nature. This is a real witch hunt.”

Dagher also denied that Kataeb MPs were present in the meeting.

“A political dialogue with Hezbollah would take place in Parliament, and the party will have to lay down its weapons on the table. In the past, we set up a committee to dialogue with them and we announced it loud and clear,” Dagher said.

“Then we realized that these negotiations were in vain,” he added. “If today, Hezbollah and its supporters are spreading these rumors, it is because it is in their interest to appear to be open to dialogue with all parties.”

Meanwhile, the Hezbollah-aligned March 8 camp has been appearing to block the election of a new head of state since October pending a presidential compromise among the different political stakeholders.

Hezbollah’s side, however, assured that political issues were on the agenda of the meeting.

“Topics of disagreement, such as weapons and even the presidential election, were discussed. I don’t understand why they are so embarrassed to have had a dialogue with another Lebanese party,” Afif said. “We have regular meetings with almost all the political protagonists.”

“This is even more the case given the dead end the country is in, with no agreement on the next president. The election of a head of state in Lebanon is indeed almost always the result of a broad consensus between the different political components of Parliament,” he added.

For his part, Faisal Abdel Sater, a political analyst close to Hezbollah, told L’Orient-Le Jour: “The Kataeb’s step toward Hezbollah is a good thing. But they don’t dare say it simply because they are fierce opponents of Hezbollah in the eyes of their electoral base.”

“I don’t think this meeting has led to any real progress on the presidential issue. But I know that all the parties are aware that they cannot bypass Hezbollah,” he added.

The majority of parties that are hostile to the March 8 camp, including the Kataeb, support the presidential candidacy of independent Zgharta MP Michel Moawad.

Hezbollah, however, sees this candidacy as a challenge to the “resistance” and accuses Moawad’s supporters of encouraging “sedition,” Hezbollah’s political council member Nabih Kaouk said in a speech on Sunday.

The anti-Hezbollah opposition parties, however, seem to be digging in their heels.

“Our candidate remains Michel Moawad. Any dialogue with Hezbollah, on this issue or any other, is a waste of time as long as the pro-Iranian party will continue to carry arms,” said Charles Jabbour, spokesperson for the Lebanese Forces, the main party of the opposition camp.

Does the Kataeb-Hezbollah meeting mean that Saifi is ready to give up?

“We remain committed to our candidate and to the democratic competition. If with time a compromise takes shape around a certain figure, we will see then,” Dagher replied.

Amal and Hezbollah support the candidacy of Marada leader Sleiman Frangieh, who lacks Christian support, with only one Marada MP serving in Parliament, in addition to three political allies.

It is to allow the emergence of a consensus — preferably around Frangieh — that Parliament Speaker Nabih Berri intends, after the holidays, to begin a dialogue with the various political parties.

What were the Kataeb doing in the southern suburb of Beirut? The question arose since information leaked to the press about a purported closed-door meeting last week between Serge Dagher, the Kataeb secretary-general, and Hezbollah officials and MPs, reportedly requested by the Kataeb.The leak seems to have embarrassed Saifi, the Kataeb headquarters, in the middle of discussions over Lebanon’s...