'No president of the Republic without us,' Bassil warns

"Even if everyone agrees on the candidacy of Sleiman Frangieh, the FPM will not vote for him," head of the Free Patriotic Movement said. 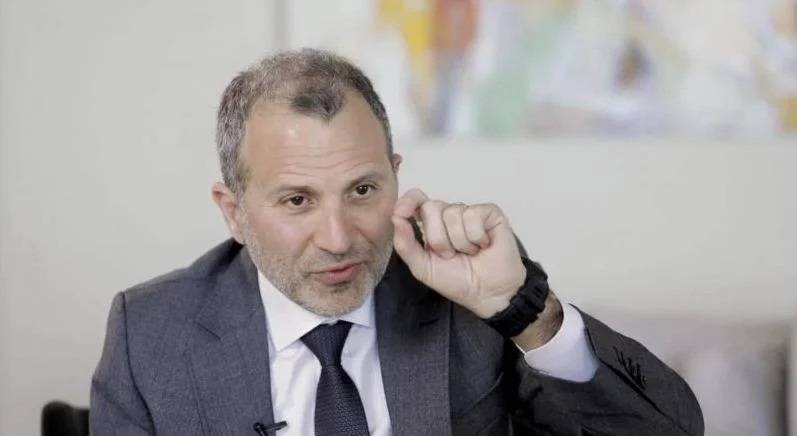 BEIRUT — Free Patriotic Movement (FPM) leader Gebran Bassil said Wednesday evening from Paris that "there will be no president" without approval from his party.

The statement comes while Hezbollah — an FPM ally — seems to be leaning toward the candidacy of the Marada Movement leader Sleiman Frangieh, to Bassil's great displeasure.

In this context, Bassil promised that his party will not vote for Frangieh even if there is a consensus among the other parties on his name.

According to Bassil, the election of the Frangieh "will bring the country back to the 1990s. We will go from the Berri-Hariri-Hrawi trio to the Berri-Mikati-Frangieh trio," he noted, referring to former President Elias Hrawi and former Prime Minister Rafik Hariri, who together with Parliament Speaker Nabih Berri constituted the "troika" during the Syrian tutelage over Lebanon.

The Marada Movement's response came from MP Tony Frangieh, son of the leader of the Christian party in northern Lebanon.

"Sleiman Frangieh will remain a national personality who unites and opposes the attempts to hide behind denominations and inward-looking attitudes that have exhausted the country," Tony Frangieh wrote in a tweet. He added that the Marada Movement "also does not agree with Bassil around a political and reformist program to build a state."

In a statement issued Thursday, the FPM backed Bassil's remarks, saying that "its leader did not attack anyone, but clarified during an internal party meeting in Paris the reasons why he does not support Sleiman Frangieh, and that he does not want the situation in Lebanon to be similar to that which prevailed in the years 1990-2005."

The Aounist party assured that it is "in a phase of communication and building bridges with the political forces that wish to do so," after it launched a call for dialogue last October, before the end of Former President Michel Aoun's mandate.

Gebran Bassil is in Paris to consolidate his position

In a Thursday statement, Parliament Speaker Nabih Berri criticized Michel Aoun, his son-in-law Bassil and the adviser to the former head of state, Salim Jreissati, saying, "The situation in 1990 was better than what has been done in the last six years which can be summarized as follows: Aoun-Bassil-Jreissati."

Jreissati's reaction didn't take long: "I am honored to learn what you accuse me of by this trio, which has never gone against my well-known moral, national and academic values."

On Thursday, the FPM leader also spoke about the presidential elections in an interview with France 24, saying, "I do not support Sleiman Frangieh because we do not agree with him on a reformist political program to build the state."

Hezbollah, which seems to be gradually emerging from its passivity in the presidential battle in favor of Frangieh, has repeatedly pleaded for a president "who does not stab the Resistance in the back."

Agreement around a candidate

"I did not stand as a candidate so as not to complicate matters and cause a vacancy, and so that we can reach an agreement around a president so that he succeeds," Bassil said, who has not officially announced his candidacy. "This facilitates things and is an abandonment of an essential right."

Commenting on his trip to France, the FPM leader said that he met, "at [his] request, the officials [he] needed to see to expose a subject, an idea and a program," without offering further detail. He assured that "the purpose of this trip is far from what is circulating in the press.

"During those meetings, no French initiative was discussed but the intentional crisis in Lebanon which is characterized by a presidential and governmental vacancy, a lack of reforms and a paralysis of institutions," Bassil said. He added that he "mentioned a comprehensive vision to get the country out of the standstill."

"There is a real chance for the Lebanese to elect a president 'made in Lebanon,'" Bassil said.

Frangieh eagerly seeks out the keys to Baabda

The Paris trip follows a visit to Doha last week. The FPM leader, who said he considers himself a "logical candidate" for the presidency, seems to be working to advance his pawns in the race to Baabda.

His visit comes after French President Emmanuel Macron spoke on the phone last Saturday with Saudi Crown Prince Mohammad Bin Salman about the Lebanese presidential election. The two leaders are expected to discuss the Lebanese issue again on the sidelines of the G20 summit currently taking place in Indonesia.

Bassil also reiterated that his party will continue to vote blank in parliamentary sessions to elect a successor to Aoun because it does not want "to present a candidate who has no chance of becoming head of state."

This comment came after Parliament failed to elect a president Thursday, during a sixth electoral session.

The FPM's head has also extended an invitation to former Prime Minister Saad Hariri, who had announced earlier this year his withdrawal from politics.

"We have not communicated lately with Hariri and this is due to his decision to withdraw momentarily from politics," Bassil said. "We wish this had not happened because the situation within the Sunni community is not healthy and this must be resolved."

"Saad Hariri is an essential part of the solution. We are committed to working with him as an essential component in the country when he decides" to return to political life, he stressed.

Bassil finally offered assurances that "the agreement reached [in October] between Lebanon and Israel on the delineation of their maritime border has nothing to do with the sanctions" issued by the United States against him.

BEIRUT — Free Patriotic Movement (FPM) leader Gebran Bassil said Wednesday evening from Paris that "there will be no president" without approval from his party.The statement comes while Hezbollah — an FPM ally — seems to be leaning toward the candidacy of the Marada Movement leader Sleiman Frangieh, to Bassil's great displeasure.In this context, Bassil promised that his party will not vote...