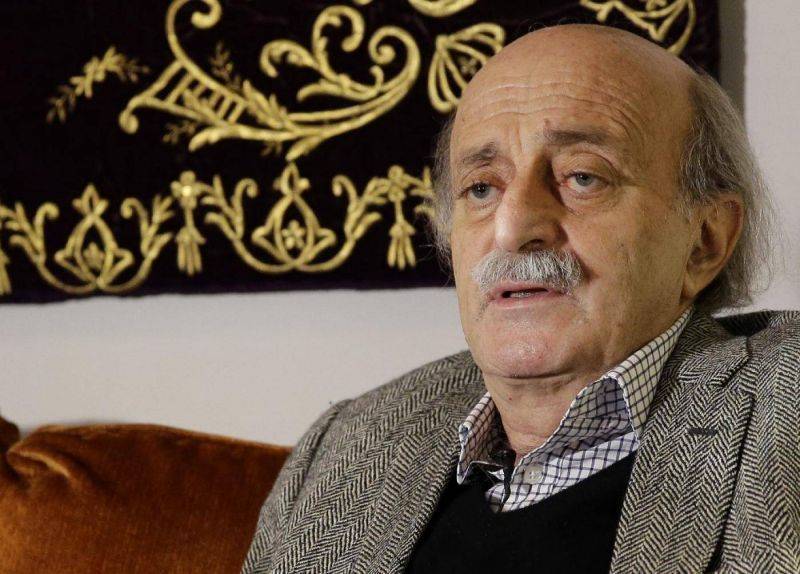 True to his reputation as a clever maneuverer, especially when it comes to building an agreement for the presidential election, Progressive Socialist Party (PSP) leader Walid Joumblatt has expressed himself profusely over the past 36 hours on the subject.

From his remarks, both to L’Orient-Le Jour and to LBCI journalist Albert Kostanian, it is clear that the Druze leader will continue to support Michel Moawad’s candidacy for the presidency until Hezbollah gives real pledges on its readiness to refocus and move toward a compromise.

When L’Orient-Le Jour asked him on Tuesday about his statements the day before, during Monday’s interview, the PSP leader said, “I clearly mentioned the conditions that must exist in the so-called consensus president: namely the ability to dialogue, the willingness to put the defense strategy on track, the need to implement the sovereign fund and the required reforms.”

“At the same time, I refused to allow the implementation of (resolution) 1559,” he said.

While he said he maintains his support for Michel Moawad, he emphasized that he expects Moawad to decide on all the requirements he has previously defined.

Joumblatt, however, left the door open to several possibilities and other names of presidential candidates, citing in no particular order the names of former MP Salah Honein and lawyer Chibli Mallat, without mentioning the candidacy of Lebanese Army Chief Joseph Aoun, whose name has also circulated, and was recently mentioned by LF leader Samir Geagea.

“He [Joumblatt] did not mention him because he believes that the head of the army has done well where he is and that Lebanon still needs him in that position,” Rami Rayess, an advisor to Joumblatt, told L’Orient-Jour.

Rayess, however, added, “Because he is faithful to the principle that Lebanon is not necessarily condemned to repeat the scenario of the army chief as president over and over again.”

The meeting was an initiative through which the PSP leader hoped to achieve a breakthrough breach amid the presidential deadline, which came in the wake of Nasrallah’s speech, paving the way for an agreement on the profile of the president.

But a dramatic turn of events took place during the Parliament's first session to elect a president on Sept. 29.

The eight MPs affiliated with Joumblatt alongside the MPs of the LF and the Kataeb cast a ballot for Moawad, who, in Hezbollah’s eyes, is a confrontational figure par excellence.

Moawad, an MP for Zgharta, is known for maintaining privileged relations with Washington, and will not be endorsed by Hezbollah.

Aware of this fact, the PSP leader tried several times on Monday to present him as a consensus rather than a confrontational candidate.

“We must not forget that [Moawad] is the son of the Taif [Agreement] martyr whose project he is carrying,” Joumblatt said during the LBCI interview, referring to René Moawad, the first president elected after the Taif Agreement on Nov. 5, 1989, and assassinated 17 days later.

So, what happened? Has Joumblatt finally joined the pro-Saudi camp, which does not want to hear about a candidate from March 8, or is it political maneuvering?

For a source close to Hezbollah, who spoke on condition of anonymity, it is “without a doubt” a maneuver on Joumblat’s part.

“He is trying to please Saudi Arabia and the United States by backing Michel Moawad. And in the end, he will fall back on a consensus president,” the source said.

Above all, the PSP leader is apparently seeking to somehow strong-arm Hezbollah — which since the meeting in Clemenceau, has not yet gotten back to Joumblatt in relation to the questions he had relayed to Nasrallah — into shifting positions.

With this, Joumblatt seems to be sending a clear message that he will not endorse the candidacy of Marada leader Sleiman Frangieh, who ostensibly remains Hezbollah’s favorite option.

“The equation is clear to everyone: no president can be elected with 65 votes,” which is the majority required from the second round, Rayess told L’Orient-Le Jour.

He explained that given the current circumstances, a provocative or confrontational president will not be a good idea, especially since the upcoming presidential term promises to be extremely difficult in the shadow of the crisis gripping the country.

During the LBCI interview, the PSP leader sought to conduct a charm offensive to try and soften Hezbollah’s position, praising, in particular, the party’s recent “successes” in the maritime border issue.

“Israel has succumbed to the strength of Hezbollah" in the negotiations, he said. He added that Hezbollah’s drones deployed over the Karish field, in the area claimed by Israel, have yielded results.

“Lebanon needs Hezbollah to defend itself, but the defense forces must be united and in the hands of the government. This should translate into a defense strategy,” Joumblatt said — an approach that the party strongly dislikes.

“And in the other direction: Hezbollah exists. Not admitting this reality would be a big mistake,” he added, distancing himself from the UN Security Council Resolution 1559, a thorn in Hezbollah’s side as it pressures for the party’s disarmament.

True to his reputation as a clever maneuverer, especially when it comes to building an agreement for the presidential election, Progressive Socialist Party (PSP) leader Walid Joumblatt has expressed himself profusely over the past 36 hours on the subject.From his remarks, both to L’Orient-Le Jour and to LBCI journalist Albert Kostanian, it is clear that the Druze leader will continue to...