The Zgharta MP is seen as a divisive candidate which would impede any compromise on his candidacy. 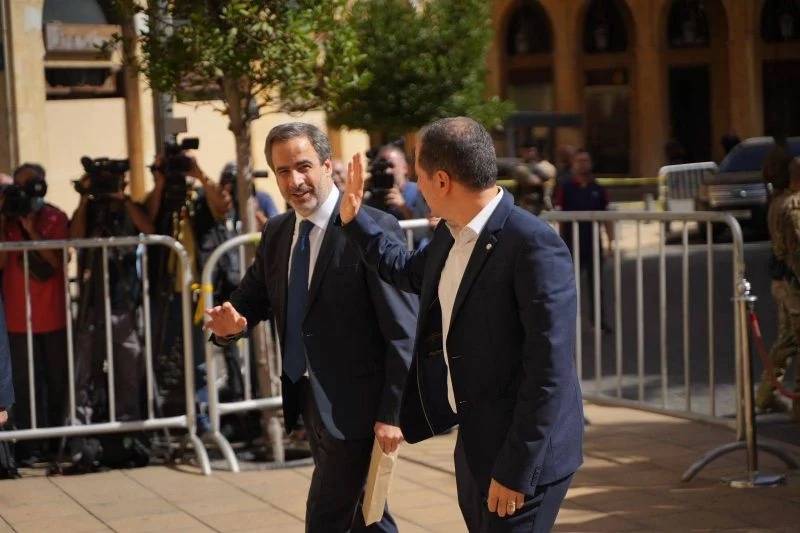 Michel Mouawad (on the left), on his arrival Thursday at Parliament for the first electoral session, alongside the leader of the Kataeb Samy Gemayel. (Credit: Mohammad Yassine)

If there is one candidate who stood out during Parliament’s first session aimed at electing a new president, it was Michel Mouawad. During Thursday’s session, the reformist MP from Zgharta indeed obtained the support of 36 of the 128 MPs, all from parties hostile to the mainstream power centers.

While this status as an opposition candidate places Mouawad at the heart of the election, it could also backfire.

The election of a president in Lebanon is almost always the product of a broad compromise reached in advance between the various political stakeholders, since it only takes a third of MPs (43) to cause a lack of quorum and block the election.

However, Mouawad is seen as too divisive for a compromise to be reached around his candidacy between the parties close to Hezbollah and those who oppose it.

Not to mention that in Lebanon, but also abroad, there have been efforts ongoing for weeks to elect a “consensus president.”

In addition to three votes from his parliamentary group (Fouad Makhzoumi is abroad), the son of the assassinated president René Mouawad was able to count on the support of the Lebanese Forces (18 MPs in the absence of Sethrida Geagea), the Progressive Socialist Party (eight), the Kataeb (four) and three independents (Ihab Matar, Bilal Houshaymi and Michel Daher).

While the total of 36 votes has propelled him to the forefront, the road to Baabda remains arduous.

“Mouawad is now the opposition candidate,” said Adib Abdelmassih, MP for the Independence Movement (chaired by Michel Mouawad). “We must make efforts to convince the MPs who did not vote for him to come on board.”

Abdelmassih is referring mainly to the two pillars of the opposition that did not cast their ballots for Mouawad: The Forces of Change MPs (13), who voted Salim Eddé, and the MPs affiliated to former Prime Minister Rafik Hariri (10), who cast a ballot in the name of “Lebanon.”

Mouawad must gather as many MPs as possible around his candidacy to hope to reach the 65 votes necessary for his election in the second round.

This is not impossible, although he will also need to convince the three independent MPs from Saida and Jezzine, Oussama Saad, Charbel Massaad and Abdulr Rahman Bizri, and especially Nehmat Frem, an opposition MP from Kesrouan, who is also said to have set his sights on Baabda Palace.

A source close to Frem did not provide a clear answer as to whether or not the MP will support Mouawad’s candidacy.

But even if the numbers smile on Mouawad, the road to Baabda appears full of potential pitfalls.

By positioning himself as the opposition’s candidate, the young MP risks seeing his chances dashed.

He may be perceived as an unacceptable option in the eyes of Hezbollah and its allies, especially since he is a central figure in the March 14 camp and a fierce opponent of the party’s weapons.

“Michel Mouawad would make a very good president,” said former Future Movement MP Ahmad Kheir. “The problem is that he simply cannot be elected. The other side will veto him.”

The Forces of Change MPs seem to share this view.

“What is the point of voting for a candidate who will not be elected?” Yassin Yassin, MP for Western Bekaa, asked.

“We have launched an initiative for all parliamentarians to find a candidate acceptable to all and capable of pulling the country out of the abyss; it is the only way to avoid a prolonged power vacuum,” he added.

“This is why we have proposed a series of names, including that of Salim Eddé. If a consensus is reached around Mouawad’s candidacy, we would be ready to support him,” Yassin said.

The Independence Movement dismisses this logic, calling for an agreement as soon as possible.

“Let’s start by uniting the opposition, then we’ll see what Hezbollah and its allies will do,” Abdelmassih said,

He added that the “the stubbornness of some MPs could lead the country straight into the arms of Hezbollah.”

Abdelmassih is not the only one with these concerns.

Unlike his former Haririst colleagues who cast a vote for “Lebanon,” Houshaymi also voted for Mouawad in the first round and is aware of the obstacles that could be put in the way of his candidacy.

“I made a principled choice. I know I voted for a sovereigntist candidate, and I have a clear conscience,” he told L’Orient-Le Jour.

Reputedly close to former Prime Minister Fouad Siniora, observers believe that his vote for Mouawad was influenced by Siniora.

“I discuss very often with Mr. Siniora, but he does not take decisions for me,” Houshaymi said..

According to a political source, Saudi Arabia, to which Siniora is close, has done a lot of lobbying in favor of Mouawad.

This strategy aims to push the “sovereigntist” camp to be on top of this presidential election, rather than letting Hezbollah take the initiative to launch the battle with its candidate Sleiman Frangieh, also a political heavyweight in Zgharta.

In this context, the Lebanese Forces, an ally of Riyadh, say they want to continue the battle in favor of Mouawad.

“We will maintain efforts to allow Michel Mouawad to collect at least 65 votes,” LF spokesman Charles Jabbour said. “Once this is done, if Hezbollah decides to boycott, let them take responsibility for the vacuum. We will then see what we do next.”

In this case, would the opposition MPs be ready to fall back on a more consociational candidate after negotiations, as they already indicated in the past they would?

“Mr. Mouawad is very keen on the unity of the opposition. Our candidate will always be the one of the unified opposition,” Abdelmassih replied.

This article was originally published in French in L'Orient-Le Jour. Translation by Joelle El Khoury and Sahar Ghoussoub.

If there is one candidate who stood out during Parliament’s first session aimed at electing a new president, it was Michel Mouawad. During Thursday’s session, the reformist MP from Zgharta indeed obtained the support of 36 of the 128 MPs, all from parties hostile to the mainstream power centers.While this status as an opposition candidate places Mouawad at the heart of the election, it could...