Maritime border demarcation progress, action against banks, Parliament to convene again on presidential question: Everything you need to know to start your Tuesday

Here’s what happened yesterday and what to expect today, Tuesday, Oct. 4: 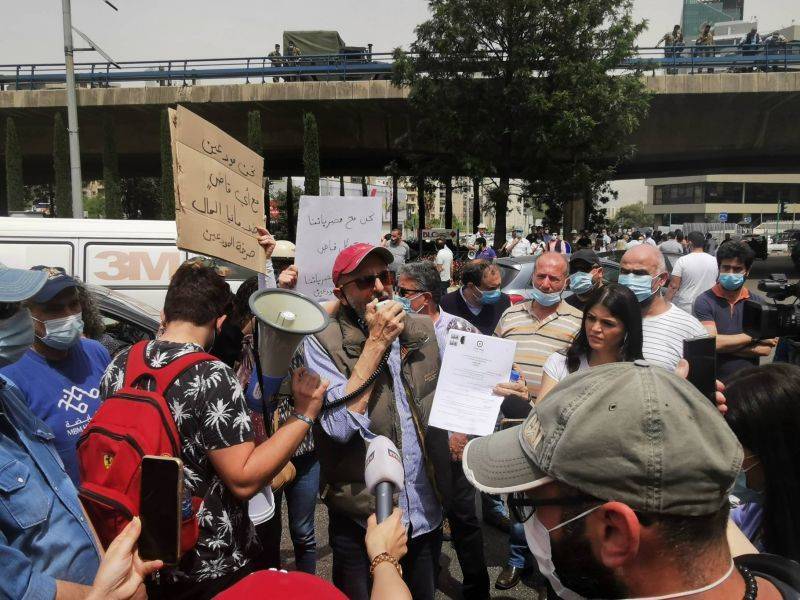 Lawyer and activist Rami Olleik, founder of Mouttahidoun, speaks during a demonstration in front of the Justice Palace in Beirut. (Credit: Marie-Jo Sader/File photo/OLJ)

Lebanon will today send its penultimate position on the demarcation of maritime borders with Israel to US mediator Amos Hochstein, Deputy Parliament Speaker Elias Bou Saab said yesterday. “We hope that [Hochstein] will send his answer before the end of the week. It is after this that our final position will be sent to him,“ Bou Saab announced after a meeting with President Michel Aoun, caretaker Prime Minister Najib Mikati and Parliament Speaker Nabih Berri. The executive and legislative heads met to formulate a response to Hochstein's written proposal — the culmination of monthslong indirect, US-mediated negotiations between Lebanon and Israel — which was delivered Saturday by US Ambassador to Lebanon Dorothy Shea. “The agreement's main pillars that we want are there,” Mikati said after the meeting, supporting an earlier claim by Bou Saab that the amendments proposed by Lebanon “will not be fundamental.” Israeli Prime Minister Yair Lapid also expressed satisfaction with the proposal, suggesting the possibility of developing “an additional gas field in Lebanon from which [Israel] will receive [its] fair share.” Aoun told French diplomats that “there will be no partnership with the Israeli side,” while Israeli officials met the same day with TotalEnergies — a member of a consortium, which was recently joined by the Lebanese Energy Ministry, licensed to explore two Lebanese offshore oil and gas blocks.An anonymous source told Reuters that the Israeli officials attempted to acquire royalties from gas produced in the Qana field, which, a source close to Berri told L'Orient Today, falls under Lebanese sovereignty in Hochstein's proposal. “The southern maritime border demarcation is a message of confidence to the international community," director of North Africa and the Middle East at the French Ministry of Foreign Affairs Anne Gueguen said after her meeting with Aoun.

"We have actions [against banks] planned [today] from depositors in Mount Lebanon and Bekaa," lawyers' collective Mouttahidoun founder Rami Olleik said yesterday, after a depositor forcibly withdrew his funds from a Blom Bank branch. Blom Bank management is "trying to understand what exactly happened because no weapons were used,” a source told L’Orient Today after an unarmed depositor and his accomplices withdrew $11,000 from his account at a Blom Bank branch in Haret Hreik, in Beirut’s southern suburbs. Mouttahidoun denied affiliation with the perpetrators of yesterday’s holdup. The group previously claimed to have coordinated holdups during which depositors forcibly withdrew their own funds, notably Sali Hafez’s incursion into a Sodeco branch of Blom Bank after which came a deluge of similar incidents. Banks partially reopened last week, implementing heightened security measures after a weeklong strike protesting “repeated attacks,” the Association of Banks in Lebanon said. The Federation of Syndicates of Bank Employees scheduled a protest for Oct. 12 in a statement calling measures that would "stop the threats that are posted on social media to break into banks using weapons.” The bank employees’ statement also blamed Lebanese authorities for making “the Lebanese lose their confidence in the banking sector” by failing to address the economic crisis. Since late 2019, commercial banks have imposed informal capital controls restricting depositors’ access to their funds.

"We do not know how things will go during the school year, but we will do our duty as much as possible," the director of a public middle school in Abra, South Lebanon, Antoine Samia told L'Orient Today , announcing a less than auspicious start to the public school year. Public schools face shortages of “electricity, heating, teachers and stationery,” Amani Hasna, Saida Elementary Mixed School's principal said. Samia added that “a large number of [teachers] have left” to find more lucrative employment, as an average teacher's salary, after accounting for commuting expenses, forces educators to survive on $3 “for the entire month” a study published by the Center for Lebanese Studies at the Lebanese American University found. what will happen,” a parent of public school pupils said, lamenting his inability to enroll his children in private schools. The CLS study found that half of the parents surveyed had recently transferred their child(ren) from a private school to a public school mostly due to elevated tuition costs. “The management of education has been lamentable for so many years,” one of the researchers behind the study, Maha Shuayb, said, criticizing a “chaotic structure” at the Education Ministry and the squandering of “huge amounts of money” dedicated to the sector.

Parliament Speaker Nabih Berri said he would convene Parliament for a second election session by mid-October, after the first round of voting last Thursday failed to name President Michel Aoun's successor. “An agreement is not the same as obtaining the consent of the 128 deputies," Berri added in an interview published yesterday in Lebanese daily Annahar. The first election session resulted in 76 protest votes, 36 votes for MP Michel Moawad and 11 votes for Murex co-founder and L'Orient-Le Jour shareholder Salim Eddé — six MPs were absent Lebanese Forces parliamentary bloc head Samir Geagea yesterday accused Hezbollah of potentially disrupting elections and causing a “presidential vacancy” in order to “handpick” the next president. Hezbollah and allied MPs' absenteeism delayed the last presidential election sessions from proceeding for two years by preventing Parliament from reaching quorum. “Whoever wants a new president should stay away from the logic of defiance,” Hezbollah leader Hassan Nasrallah said on Sunday, affirming the party's support for a “consensus” president. Aoun and French officials, during a meeting yesterday, both expressed their desire for the presidential elections to be held within the constitutional deadline, Oct. 31.

In case you missed it, here's our must-read story from yesterday: “Nasrallah once again uses 'consensus' rhetoric against opposition”

Want to get the Morning Brief by email? Click here to sign up.Lebanon will today send its penultimate position on the demarcation of maritime borders with Israel to US mediator Amos Hochstein, Deputy Parliament Speaker Elias Bou Saab said yesterday. “We hope that [Hochstein] will send his answer before the end of the week. It is after this that our final position will be sent to him,“ Bou...