The signing of the maritime border agreement 'could take place before the end of Aoun's term.' 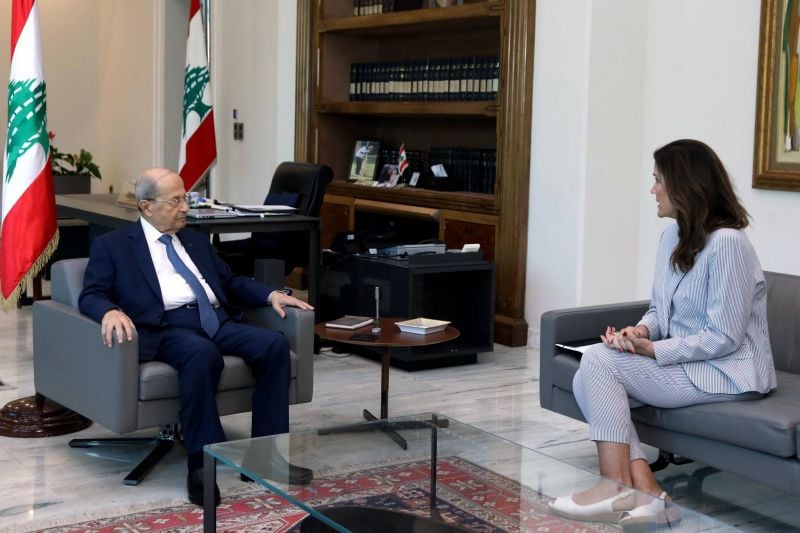 After weeks of indirect negotiations between Beirut, Tel Aviv and Washington, US Envoy Amos Hochstein delivered his written proposal to Lebanon on Saturday regarding the state's maritime border dispute with Israel.

In recent days, optimism seemed to prevail. At 6 p.m. on Friday, Lebanese authorities learned that Hochstein's written proposal had reached the US Embassy in Beirut. Without delay, an appointment was made between US Ambassador to Lebanon Dorothy Shea and Lebanese officials to pass along the proposal.

Shea was received by President Michel Aoun in Baabda on Saturday, followed by caretaker Prime Minister Najib Mikati, at his home, and  Speaker of Parliament Nabih Berri, in Ain al-Tineh.

"The atmosphere is positive and an agreement should be reached soon," Mikati later told L'Orient-Le Jour. The signing of this agreement "could take place before the end of Aoun's term of office" on Oct. 31, he added.

Mikati said the 10-page proposal, if accepted, "will have positive repercussions on other issues and especially on the presidential election." Upon leaving Ain al-Tineh, Shea also expressed optimism and spoke of a "very positive" situation.

According to a source close to Hezbollah, Baabda contacted party leaders to discuss the content of the proposal.

A source close to Nabih Berri said the proposal provides for the area granted to Lebanon to be delimited by Line 23, with Beirut gaining sovereignty over the entire Qana gas field, which extends southwards beyond the area bordered by Line 23.

According to the current proposal, the blocks of the Lebanese exclusive economic zone (EEZ) will remain intact, with no part of the zone granted to Israel. The area between the "line of buoys" and Line 23 should be declared a safe zone, but under Lebanese sovereignty, because it belongs to the Lebanese EEZ.

Maritime border: Is the ‘line of buoys’ an Israeli trap?

Beirut already indicated it was unopposed to this area being supervised by the United Nations Interim Force in Lebanon (UNIFIL), whose mandate would then need to be amended.

The proposal therefore reflects many of Lebanon's demands. However, in its response to Hochstein's proposal, Beirut will have to decide on the question of UN supervision of the safe zone.

The "line of buoys," which extends 6 km into the sea from Ras Naqoura, was set up by Israel after its withdrawal from southern Lebanon in 2000. With the adoption of Line 23 as the official maritime border, the line of buoys would fall into Lebanese territoy, which prompted Israel to request a deviation from Line 23 to take the buoys into account.

No link to the land border

Before officially submitting his proposal, Hochstein spoke with Deputy of Parliament Elias Bou Saab and Director of General Security Abbas Ibrahim to finalize its content.

The two Lebanese officials reiterated Lebanon's refusal that the maritime border's departure point affect the Lebanon-Israeli land border. According to the Hochstein's proposal, the maritime border would depart from the Israeli point 31, which is further north than point B1, as requested by the Lebanese.

Point 31 marks the beginning of the "line of buoys," so the maritime boundary would follow this line for 6 km into the sea before rejoining Line 23.

However, it is explicitly mentioned in the text that the maritime border will not be linked in any way to the future demarcation of the land border. Indeed, for the latter, Lebanese authorities do not seem ready to let go of point B1.

This refers to the area between the line of buoys and the departure point of Line 23 itself — point B1 — which would therefore be placed under UN control, while maintaining Lebanese sovereignty.

Now that the American proposal is in the hands of Lebanese authorities, what remains to be done before an agreement is reached?

First, Lebanon must draft a single response — in coordination between Baabda, Ain al-Tineh, the Grand Serail and Hezbollah — in which the country signals its approval or disapproval of the proposal. According to sources close to Berri, the Lebanese response should be ready by Monday.

The Israeli restricted government will meet to endorse the Lebanese response. A session of indirect talks between all parties will then have to be scheduled at UNIFIL headquarters in Naqoura to prepare a final version of the agreement.

Official sources said that Beirut will accept Hochstein's proposal, as long as it does not affect the land demarcation.

The agreement can then be signed, on separate papers, by Lebanon and Israel. Representatives of the UN and Washington will also have to sign the documents.

On the Lebanese side, the president, prime minister, minister of public works and minister of defense will initial the document, which will be then sent to the UN in the form of a new maritime border delimitation decree, replacing the current text: Decree 6433/2011.

The exploitation of the Lebanese EEZ should then be able to begin, while the gas giant Total has indicated it will not begin its exploitation operations until the agreement is signed between Lebanon and Israel.

After weeks of indirect negotiations between Beirut, Tel Aviv and Washington, US Envoy Amos Hochstein delivered his written proposal to Lebanon on Saturday regarding the state's maritime border dispute with Israel.In recent days, optimism seemed to prevail. At 6 p.m. on Friday, Lebanese authorities learned that Hochstein's written proposal had reached the US Embassy in Beirut. Without delay, an...