Protests for women's rights and accessible cancer treatments, presidential candidates, maritime borders: Everything you need to know to start your Monday

Here’s what happened over the weekend and what to expect today, Monday, Oct. 3: 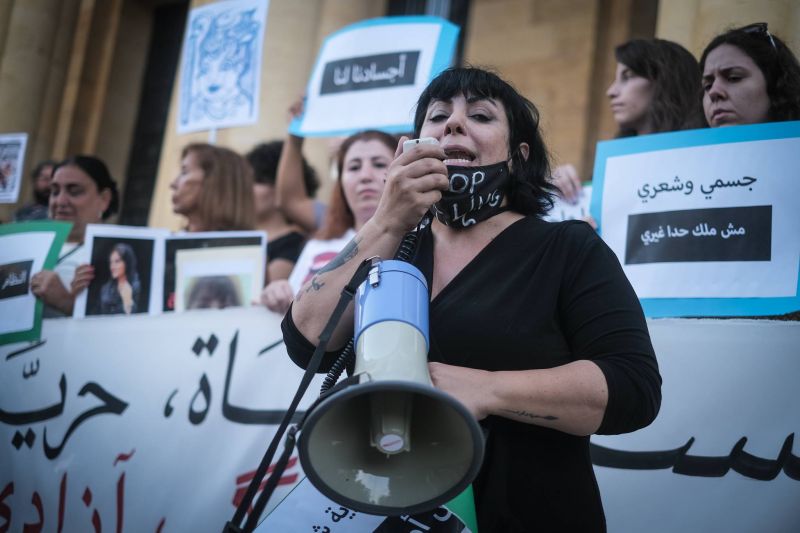 “The modifications that Lebanon will propose [to a US-mediated written proposal on the maritime border between Lebanon and Israel] will not be fundamental,” Deputy Parliament Speaker Elias Bou Saab said Sunday, auguring a resolution to the years-long border dispute. US Ambassador to Lebanon Dorothy Shea on Saturday delivered to President Michel Aoun and caretaker Najib Mikati US mediator Amos Hochstein’s proposed resolution to the maritime border dispute between Lebanon and Israel. Lebanese officials welcomed the proposal, which “will have positive repercussions on other issues and especially on the presidential election,” Mikati said. Hezbollah leader Hassan Nasrallah — who previously threatened military escalation against Israel if it begins gas exploration before the border dispute is settled — said in a speech Saturday evening he hoped for a positive resolution of negotiations, describing the proposal as an “important move.” Nasrallah expected “decisive days” ahead, while Mikati told L’Orient Today “an agreement should be reached soon,” possibly before “the end of Aoun’s term [on Oct. 31].” For his part, Israeli Prime Minister Yair Lapid said Sunday that “we cannot yet say that this is a done deal,” while praising the proposal. An end to the maritime border dispute would mean the beginning of Lebanon’s foray into oil and gas production, following the Energy Ministry’s announcement it was buying into a consortium licensed to explore two offshore blocks.

“It’s unacceptable for men to tell women what they can or can’t wear or do. I stand in solidarity with women whether in Iran or elsewhere,” a protester said on Sunday during a demonstration at the National Museum in Beirut in solidarity with Iranian protests condemning the death of Mahsa Amini. Several dozen protesters gathered in Beirut, reclaiming “women’s right to choose” and decrying “tyranny and oppression.” The protesters brandished signs and chanted the slogan "woman, life, freedom,” which have reverberated from rallies across the world in solidarity with Iranian protests sparked by Amini's death. The Norway-based Iran Human Rights (IHR) NGO said on Sunday that at least 92 people had been killed as Iranian authorities cracked down on protests ignited by Amini’s death in custody. On Sep. 16, Amini was visiting Tehran with relatives when she was arrested by the country’s morality police to reportedly “instill the rules in her and teach her how to wear the hijab and how to dress,” Amini’s cousin, Erfan Salih Mortezaee, told AFP. “The police officers hit Jina … when they hit her in the head with the baton, she lost consciousness,” Mortezaee said, adding that her hospitalization was delayed despite relatives’ pleas. After three days in a coma, Amini was pronounced dead. "Jina we are here for you," some of the Beirut demonstrators also chanted Sunday, in reference to Mahsa Amini's Kurdish name.

Dozens of protesters and cancer patients yesterday marched from Martyr’s Square to the Statue of the Emigrant, to denounce difficulties in accessing life-saving treatment amid Lebanon’s economic collapse. Protesters decried medicine shortages and medication trafficking, expensive and out-of-reach treatments, as well as the government's failure to provide the necessary funds to help patients. “Hundreds of patients have been forced to stop their treatment because of the high cost of drugs and chemotherapy sessions. Others are unable to find their drugs, as many products are out of stock in Lebanon or delivered in insufficient quantities,” Nassar said. In early 2022, caretaker Health Minister Firas Abiad set in motion the "MediTrack" system to deal with the shortage and illegal storage of drugs — although this project has still not been implemented.

The Syrian Red Crescent on Saturday transported to Lebanon the bodies of four victims from Sep. 22’s fatal irregular migration attempt, while Lebanese authorities convened to address the repatriation of migrants detained in Turkey and Greece and Internal Security Forces announced the arrest of three alleged people smugglers. Difficulties identifying the bodies of the more than 100 people who drowned near Tartus last month have prolonged the mourning process in Lebanon, as bodies arrived sporadically from Syria over the past week. Also on Saturday, Mokhtar al-Kassar of Bebnin, Akkar, in northern Lebanon, said the Lebanese embassy contacted the migrants in Turkey who have been detained since last Thursday reportedly due to their inability to pay a release fee. Despite the perils involved in informal sea crossings to Europe, the number of irregular migration attempts has increased sharply for the second year in a row, a UN official told L’Orient Today. Last Thursday, caretaker Interior Minister Bassam Mawlawi announced a number of measures aimed at curbing informal sea migration.

Maronite Patriarch Bechara al-Rai on Sunday urged MPs to “rise up against themselves and elect a sovereign president” after last Thursday’s presidential elections failed to name President Michel Aoun’s successor. “Not electing a new president is an act of sabotage,” Rai added. More than half of the 122 MPs — out of a total 128 — in attendance during Thursday’s parliamentary session to elect a president cast blank ballots. The remainder were split between protest votes and ballots for MP Michel Mouawad and Murex co-founder and L’Orient-Le Jour shareholder Salim Eddé. The outcome of the session "stresses the need for consultation between the political forces,” Hezbollah chief Hassan Nasrallah said. Parliament Speaker Nabih Berri said he would schedule a new electoral session "when there is an agreement on a President." On Friday, a spokesperson for the French Foreign Ministry said "the presidential election is an essential step in the process of ending the crisis in Lebanon,” calling on Lebanese officials “to rise to the occasion” and elect a new head of state within the constitutional deadline. Fears loom that neither a new president will be elected nor a new government be formed by the end of Aoun’s term.

The Lebanese judiciary released on bail former MP Othman Alameddine after he was arrested for firing a military weapon into the air in Minieh, North Lebanon. Alameddine reportedly fired the gun during a celebration. Supporters of the former MP blocked a road in Minieh to protest his arrest, L’Orient Today’s correspondent in the area reported. Celebratory gunfire remains a common practice across Lebanon despite its illegality, often causing deadly consequences. Over the weekend, the ISF arrested three fugitives who had escaped from a Nabatieh prison along with two alleged robbers who had mugged a man for $50,000 in Chtoura, Bekaa.

In case you missed it, here’s our must-read story from the weekend: “Thrift shops enable Lebanese to remain on top of trends, despite crisis.”

Want to get the Morning Brief by email? Click here to sign up.“The modifications that Lebanon will propose [to a US-mediated written proposal on the maritime border between Lebanon and Israel] will not be fundamental,” Deputy Parliament Speaker Elias Bou Saab said Sunday, auguring a resolution to the years-long border dispute. US Ambassador to Lebanon Dorothy Shea on Saturday delivered to...