Heir to a political family, the Zgharta candidate claims to follow 'Chehabism,' a reference to former Lebanese President Fouad Chehab with whom Michel Moawad's father, a former president, was close. 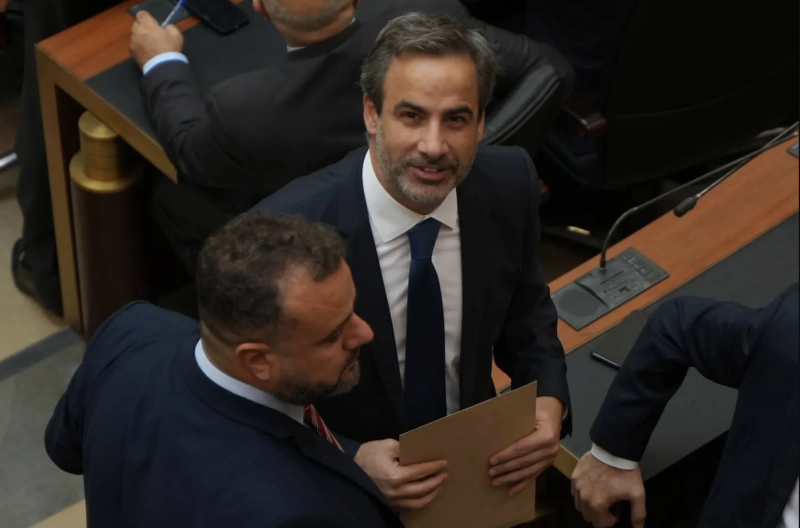 Michel Moawad, during the session of the election of the president on Sept. 29, 2022. (Credit:Mohammad Yassine/L'Orient-Le Jour)

His fate tragically resembles that of his political opponent in Zgharta, Sleiman Frangieh, a main presidential candidates.

At a very young age, Michel Moawad lost his father, former Lebanese President René Moawad, who was assassinated on Nov. 22, 1989, 17 days after being elected president. A similar fate befell Sleiman Frangieh, one of Lebanon’s current presidential candidates, whose father, mother and sister were murdered at the hands of a Kataeb commando in 1978.

Michel’s mother, Nayla Moawad, launched herself into politics after her husband’s death, while she waited for her son to come of age.

Nayla Moawad served as Minister of Social Affairs from 2005 to 2008 and has been elected to Parliament several times since 1991. She was seen as the face of the massive March 14 demonstrations in 2005, which marked the one-month anniversary of the assassination of former Prime Minister Rafik Hariri and led to the creation of the so-called sovereignist March 14 camp.

Many recall her cry of triumph when the government of then-Prime Minister Omar Karameh resigned in the wake of demonstrations.

Moawad is certainly a political heir, but he never ceased to add his personal touch through reformist ideals.

On the diplomatic front, Nayla Moawad established strong ties with the United States early on. Her son would inherit this privileged relationship with Washington, by deepening the relations with several members of the American Congress.

The family has made it a custom to invite American officials visiting Lebanon to their residence in Ehden. This was notably the case when then-US Secretary of State Mike Pompeo was received at the Moawad home in March 2019, in the presence of then-Under Secretary of State for Political Affairs David Hale and Deputy Secretary of State David Satterfield.

After having studied public law at Paris II-Assas, Moawad returned to Lebanon to take on the family’s political legacy, but with the intention of modernizing its approach.

This was the objective when he founded his Independence Movement in 2005, born in the wake of the March 14 demonstrations — dubbed the “Cedar Revolution” — in the aftermath of Rafik Hariri’s assassination.

During the 2018 parliamentary elections, Moawad ran on the Free Patriotic Movement’s ticket without joining the Aounist camp.

At the time, he justified the decision by saying he was seduced by the slogan of the “strong president,” upheld by the camp of President Michel Aoun.

It did not, however, take Moawad long to denounce the group, particularly after the outbreak of the October 2019 popular uprising and the August 2020 Beirut port explosion — a tragedy that prompted him, like other MPs, to resign from Parliament.

In the May 15 legislative elections, he returned to his roots, joining forces with the Kataeb, Majd Harb — son of former MP Boutros Harb — and other opposition figures.

During Parliament’s most recent round of presidential elections on Sept. 29, Moawad appeared to be the champion of the main traditional opposition parties (the Lebanese Forces, Progressive Social Party and Kataeb).

The Forces of Change MPs, however, made a different choice and opted to vote for Salim Eddé, a personality they deem is not part of the political polarization between March 8 and March 14.

For them, Moawad is now seen as seriously affiliated with the March 14 group.

“If we refuse to vote for Sleiman Frangieh, how can we accept to vote for Michel Moawad?” said MP Paula Yaacoubian (Forces of Change/Beirut I). “It’s not a question of people, but of principle.”

Others reproach Moawad for taking positions deemed too close to the interests of the banks for his membership of Parliament’s Finance Committee.

For the LF who voted for him, Moawad is anchored in the sovereignist camp.

“For us, the assassination of René Moawad was the first attempt at a coup against the Taif Agreement,” said LF spokesman Charles Jabbour. “Voting for his son is a way of rectifying the situation.”

René Moawad, the first post-Taif president, was initially counted among those close to former President Fouad Chehab (1958-1964). Beyond that, he distinguished himself by his political moderation throughout his career.

It is this legacy that his son Michel claimed as he left Thursday’s session in Parliament, proclaiming himself “as much a son of Chehabism as of René Moawad.”

Damascus was blamed for the the assassination of René Moawad in a district of Beirut cordoned off by Syrian forces. Ironically, Michel Aoun — who at the time ensconced himself at the Baabda Palace as head of a Christian military government — refused to recognize the elder Moawad as president and fled the palace. This weakened René Moawad’s position.

The Syrians wanted the president’s official authorization to storm Baabda and dislodge Aoun — a request that René Moawad categorically refused, unable to bring himself to allow a foreign army to undercut the presidency and defeat the Lebanese Army.

Michel Moawad is married to Marielle Kosremelli, and a father of four.

Correction: A previous version of this article mistakenly stated that Michel Moawad served as Minister of Social Affairs from 2005 to 2008. The minister was his mother, Nayla Moawad.