'Whoever wants a new president should stay away from the logic of defiance', Hezbollah leader said. 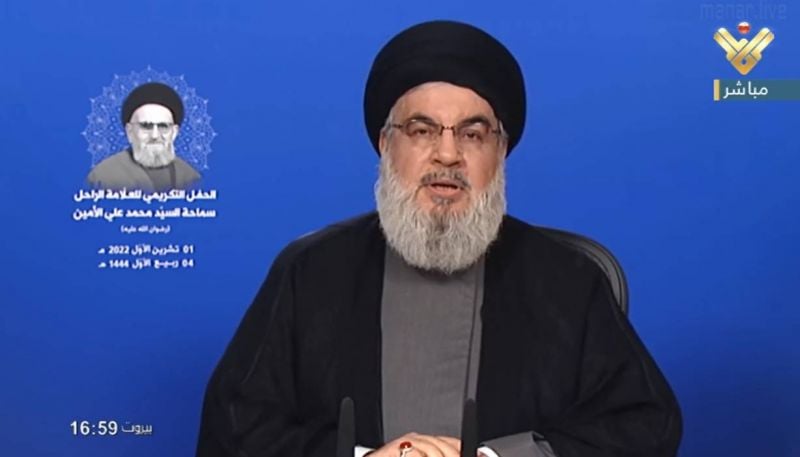 Nasrallah described the four months of indirect negotiations conducted by the American envoy as "months of effort and political, media and ground struggle," while his party had repeatedly threatened to target Israeli gas infrastructure if Tel Aviv began exploiting its offshore resources before the dispute was settled.

Regarding the response now expected from the Lebanese officials, Nasrallah said "the state is the party that will take the decision it considers appropriate and in the interest of Lebanon."

"What is important today is that we have a written text from the mediating party, that was handed to the three presidents," Aoun, Berri and Mikati, "and we hope that this will close in a good way the border file and open a new and promising horizon for the Lebanese people."

Nasrallah also said "if the demarcation file gives good results, that will be the result of a national unity, cooperation and solidarity."

Commenting on the presidential elections, Nasrallah said that Thursday’s parliamentary session to elect a new president was "important and showed no political team currently has the parliamentary majority," stressing that "whoever wants a new president should stay away from the logic of defiance," in a dig at Lebanese Forces leader Samir Geagea, who previously called for the election of a president who defies what he considers the "majority": Hezbollah and its allies.

Nasrallah added that Thursday's session "stresses the need for consultation between the political forces so that we can have a president as soon as possible."

During the parliamentary session, both Hezbollah and Amal Movement’s MPs — totaling 30 MPs, 15 in each party — cast a blank vote.

Until now, Hezbollah did not seem to pronounce itself in favor of a well-defined candidate, even though two of its allies are considered as "natural" candidates: Free Patriotic Movement leader Gebran Bassil, and his rival, Marada Movement leader Sleiman Frangieh.

Nasrallah also addressed the government formation saying that "time is running out, and we hope that a government will be formed in the next few days."

Caretaker Prime Minister Najib Mikati's previous cabinet has been operating in a caretaker capacity since May due to a political deadlock between him and president Michel Aoun over forming the new government.

The risk of both a presidential and governmental vacuum looms over Lebanon if Aoun's term expires on Oct. 31 without a new government having been formed. In recent days, several political figures, including Hezbollah's leader Hassan Nasrallah, have said they expect a new government to be formed soon.

On the topic of the migrant boat that departed Lebanon and capsized off the coast of Tartus on Sept. 22, Nasrallah described the incident as a "repeated crime" and called for "a serious judicial investigation," accusing "some security apparatuses of negligence," without mentioning specifics. Nasrallah also thanked "the Syrian authorities and the people of Arwad Island for what they have done to save the families and recover the bodies of the victims."

An official count of passengers aboard the sunken boat is still unknown, but the number is widely reported to be around 150. The official death toll of the shipwreck exceeded 100 last week, with rescued 21 survivors. Nationals from Syria, Palestine and Lebanon were all aboard the boat, and roughly 30 remain missing.

Nasrallah also praised Ayatollah Ruhollah Khomeini, who established Iran's regime and introduced compulsory hijab laws in 1981, which activists are currently protesting following the death of 22-year-old Mahsa Amini, who died in the custody of the state's infamous morality police.

Nasrallah said Saturday that "the most important element in the axis of resistance today is the Islamic Republic of Iran," and adding that "a strong and capable Iran has been targeted since day one. Therefore, everyone is betting on the move from within, and the sanctions aim to incite people against the Islamic republican regime."

An image of what appeared to be a memo issued by Nasrallah calling for 4,000 troops to be mobilized to Iran “to participate in securing sensitive facilities” made the rounds on social media earlier this week. The memo specified it would be preferable to send “those with experience in service in Syria and who have taken language courses in Persian.”

However, when contacted by L’Orient-Today on Tuesday, a Hezbollah spokesperson denied that the party will send any of its members to Iran to counter ongoing unrest in the country.