Aoun consulted Berri and Mikati on how to provide the American mediator with Lebanon's response 'as soon as possible.' 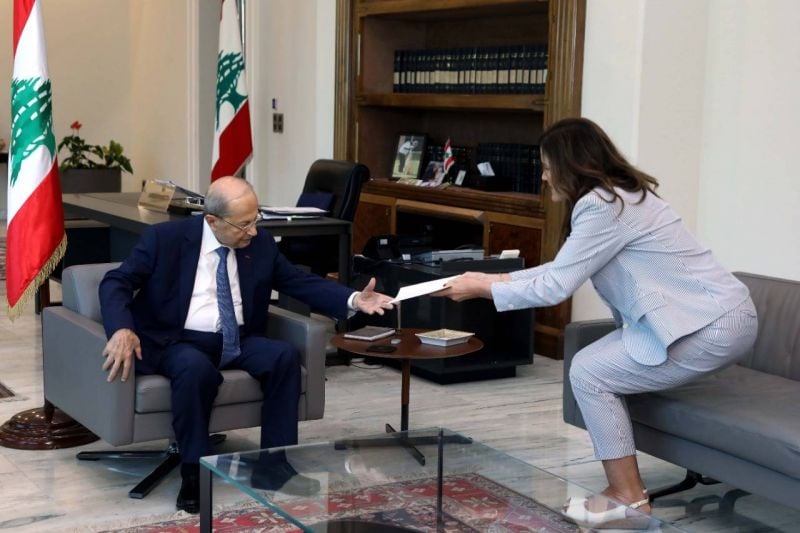 President Michel Aoun receives the written proposal with the Israeli offer related to the maritime demarcation between Israel and Lebanon from US ambassador to Lebanon Dorothy Shea in Baabda on Oct. 1, 2022. (Credit: Twitter/@LBpresidency)

Aoun and Mikati met with US ambassador to Lebanon, Dorothy Shea, during which Shea delivered the proposal.

Hoststein heads the indirect maritime border negotiations between Lebanon and Israel. The written letter includes his resolution proposal for the years-long border dispute between the two countries.

After his meeting with Shea, Aoun made phone calls to Parliament Speaker Nabih Berri and caretaker Prime Minister Najib Mikati to consult with them on how to provide the American mediator with Lebanon's response "as soon as possible."

According to L'Orient-Le Jour's correspondent in Baabda, the letter includes an account of the indirect negotiations between Beirut and Tel Aviv, as well as Hochstein's official resolution proposal.

Lebanon is "at the doorstep" of obtaining the right to extract oil and gas from its territorial waters, "without having any direct relations with Israel but rather through American mediation," Aoun told Lebanese daily Annasher in an interview published Friday.

Two weeks ago, Aoun said negotiations for a deal between the two states had entered their "final stages."

A maritime deal between the two countries would help determine which oil and gas resources belong to which country, paving the way for more exploration and hopefully averting any conflict between heavily-armed Hezbollah and its sworn enemy, Israel.

During his last visit to Beirut on Sept. 9, Hochstein provided Lebanese authorities with Israel's latest conditions, which Hezbollah described as a "trap."

In exchange for Lebanon's claim to Line 23 and the entire Qana gas field, Israel demanded the border be drawn along the "line of buoys" — a line extending 6 km into the sea from Ras Naqoura that Israel established after its withdrawal from southern Lebanon in 2000.

However, Line 23 departs at Point B1, while the line of buoys departs from point 31, further north along the coast. If Line 23 is adopted as the maritime border between the two countries, the line of buoys would become Lebanese territory.

To avoid this scenario, Israel requested the maritime border line be deviated to take into account the line of buoys, before rejoining Line 23.

Lebanon insists that the line of buoys have no impact on the land border demarcation, and demands a written text to that effect.

In a reply sent to Hochstein last week by Deputy Parliament Speaker Elias Bou Saab, Beirut believes the area between the line of buoys and Line 23 should be declared a “safe area” under Lebanese sovereignty, because it belongs to Lebanon's exclusive economic zone (EEZ).

Beirut is also unopposed to the area being supervised by the United Nations Interim Force in Lebanon (UNIFIL), whose mandate would then need to be amended.