Water disruptions, promises on government formation, protesters demand activists' release: Everything you need to know to start your Friday

Here’s everything that happened yesterday and what to expect today, Friday, Sept. 16: 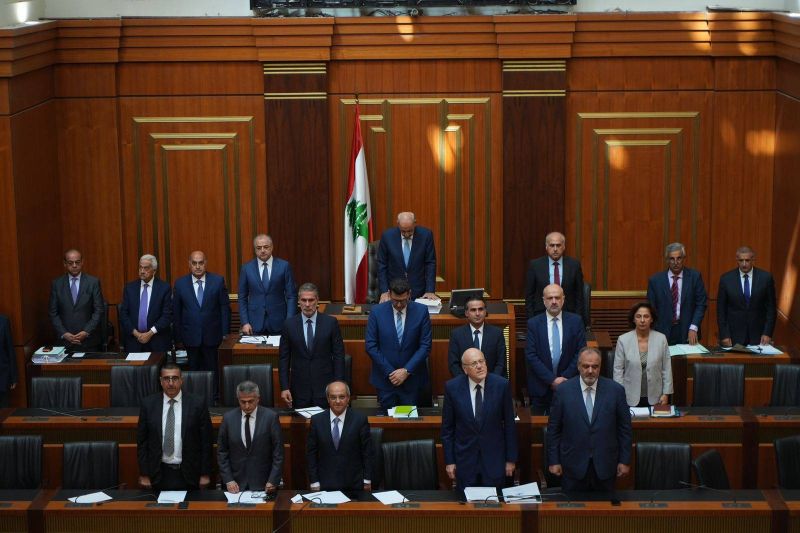 Lebanese MPs during a session of the Parliament on Sept. 15, 2022. (Credit: Mohammad Yassin/L'Orient Today)

“Neither the government, nor its president, nor its finance minister should brag about the completion of this draft budget,” Hezbollah-affiliated Loyalty to the Resistance bloc head Mohammad Raad said during Wednesday’s Parliament session, echoing other MPs’ criticisms of the 2022 draft law. Criticisms of the budget also occurred outside Parliament where protesters gathered, decrying the draft law. “The economic and social vision is absent from the budget,” said MP Ibrahim Kanaan, head of the Finance and Budget Committee which submitted the draft law to the general assembly despite internal disagreements over some measures. Forces of Change MP Paula Yacoubian described the budget as “failed” while Lebanese Forces MP Georges Adwan said his bloc, the Strong Republic, will “not vote” for the text. The adoption of credible, balanced budgets is among the reforms mandated by the International Monetary Fund to release billions in aid funds to Lebanon. An IMF delegation is scheduled to arrive in Lebanon Monday to “accelerate” the implementation of reforms which agency spokesperson Gerry Rice described as “essential to ending the crisis.”

Caretaker Prime Minister Najib Mikati said Thursday he would not leave his upcoming meeting with President Michel Aoun “before forming a new government.” “As long as there is no agreement with the caretaker prime minister, I do not mind not seeing him anymore,” Aoun said during an interview Tuesday, hinting at tensions over delayed government formation. Aoun, whose term expires on Oct. 31, refuses to cede his powers to a caretaker government. Mikati, on the other hand, refuses to add six political ministers of state to his team, as Aoun has demanded. Fears of an executive power vacuum loom as the constitutional deadline for electing Aoun’s successor approaches. Forces of Change MPs launched their initiative to define the profile of the next Lebanese president on Monday through meetings with different parliamentary blocs. Government formation may be stalled until Mikati returns to Lebanon after attending the funeral of Queen Elizabeth II on Monday.

“Rehabilitation works” to the Tallet al-Khayat water station will disrupt the water supply in Beirut until Saturday, the Beirut and Mount Lebanon Water Establishment said. The works began on Thursday morning and include replacing the station’s pumps, collectors and electrical panels. Water cuts are expected in Tallet al-Khayat, Mar Elias, Aisha Bakkar, Qoreitem, Verdun, Ras Beirut, Raouche, Bir Hassan, part of Ghobeiry, Tariq al-Jdideh and the American University of Beirut Medical Center. Beirut opposition MPs criticized in July the lack of maintenance work for “12 years” on “the only pipe that gives water” to parts of the city after a technical error cut supply for several weeks in July. Abir Zaatari, a researcher with the Beirut Urban Lab at the American University of Beirut, recently identified issues in water supply and disparate provision in eastern and western parts of Beirut due to “a combination of topography, the location of the water reservoirs, the poor maintenance of the water infrastructure and, of course, poor governance of water systems.” Water shortages have been a source of outrage across several areas in Lebanon, incurring significant costs on citizens who rely on private water supply sources.

Protesters blocked a road in northern Lebanon to demand the release of suspects held in connection to Wednesday’s Blom Bank hostage situation. Protesters in Halba lit tires to oppose the arrest of activists from Akkar who were reportedly present at the hold-up in Sodeco's Blom Bank branch. Sali Hafez, brandishing a toy pistol and accompanied by a number of activists, forcefully withdrew funds from her Blom Bank account after holding those present in the branch hostage. Hafiz’s act and a similar hold-up that same day at an Aley branch of BankMed were “coordinated” by depositors’ associations, according to lawyer and activist Rami Ollaik, who spoke to L'Orient Today. “Some depositors are endangering the safety of our colleagues in the branches and harming [our] dignity,” retorted the Federation of Syndicates of Bank Employees in Lebanon in a statement Thursday, calling on authorities to instate protective measures. The Association of Banks in Lebanon announced banks were “forced to take preventive security measures” left to the discretion of each institution. On Thursday, two masked suspects robbed a man of some $50,000 in front of a Bank Audi branch in Chtoura, L’Orient Today’s correspondent reported.

In case you missed it, here’s our must-read story from yesterday: “Why was the 1982 Marine deployment to Lebanon Reagan’s greatest regret?”

Want to get the Morning Brief by email? Click here to sign up.“Neither the government, nor its president, nor its finance minister should brag about the completion of this draft budget,” Hezbollah-affiliated Loyalty to the Resistance bloc head Mohammad Raad said during Wednesday’s Parliament session, echoing other MPs’ criticisms of the 2022 draft law. Criticisms of the budget also...