In part four of L’Orient-Le Jour’s series on women who had an impact on the region, the story of Anbara Salam Khalidi, a quietly rebellious woman with a passion for education.

It was the year 1927, on a Sunday like any other at the American University of Beirut, where conferences on a variety of themes were regularly organized.

That day, Anbara Salam was invited to give a lecture entitled “An Oriental Woman in London.” She had just returned to her native Lebanon after spending two years in the English capital with her father, Salim Salam, a respected dignitary in Beirut.

Suddenly, in full view of everyone, the young woman decided to take off her veil. This unprecedented gesture reportedly provoked a wave of indignation in the audience.

Anbara would go down in history as the first Lebanese woman to publicly unveil herself, a few years after the Egyptian Huda Shaarawi.

Insults were hurled at her from all sides. Objects too. Faced with the angry outcry, Anbara stood there, bareheaded, with an impassive face.

It took the disgruntled audience a warning from an AUB official and a good 20 minutes to calm down, according to accounts of the incident. Agitators were asked to leave the premises.

As the conference resumed, the incident and the hatred it roused made history. It is reported that in the wake of the event, several non-veiled women were attacked in the street, burned in the face with acid or disfigured by razor blades.

Anbara herself reportedly had to stay home for six months until things calmed down.

Born on Aug. 4, 1897, Anbara grew up in a Sunni Beirut family from Mousseitbeh, consisting of 10 children — seven boys and three girls — including former Prime Minister Saeb Salam. Her father played an important role in her education.

“She was his favorite daughter,” recalled Tammam Salam, former Prime Minister and nephew of Anbara, in an interview with L’Orient-Le Jour.

Nicknamed Abu Ali, her father “was a liberal man for his time, despite the fact that his status as a Beirut dignitary should have forced him to adopt a more conservative stance in the city’s Sunni environment,” Tammam Salam added. 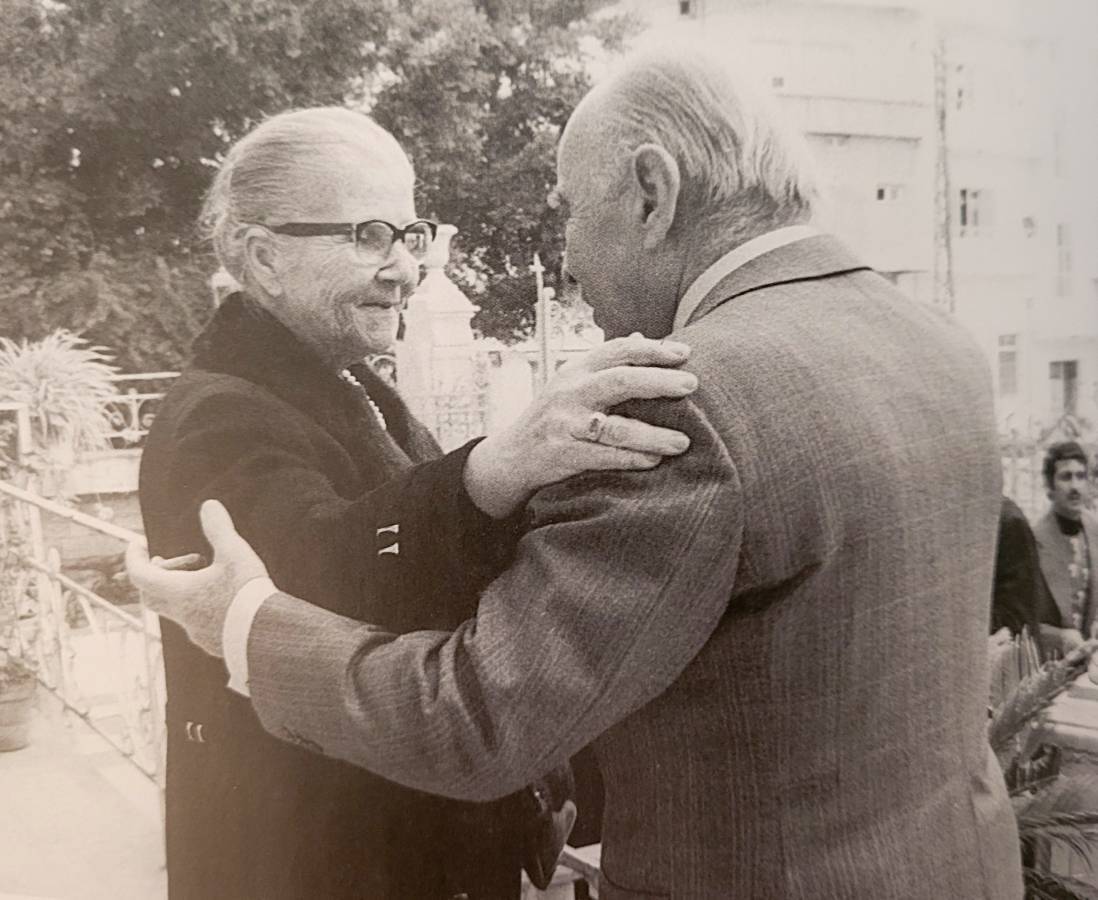 Anbara’s father closely followed up on her schooling as she was growing up.

The young girl turned out to be quite gifted. Endowed with an exceptional memory and a passion for reading, she was encouraged by Abu Ali to pursue her education. She underwent her primary studies at the Saint Joseph school for girls, then at the Makassed School.

Salim Salam assigned writer Abdallah Boustany, a renowned educator of the time, the task of teaching his daughter the Arabic language. As for French, she learned from a priest.

The Makassed School was a turning point in Anbara's life. It was there that she reportedly crossed paths with Julia Tohme, a Christian woman appointed to head the school and who had a remarkable influence on the teenager.

Tohme introduced Anbara and her classmates to the history of feminism in the West and women’s struggles for their rights and freedom. In her memoirs, Anbara writes of a woman who, according to her, instilled in the girls “the notion of dignity,” inviting them to develop their own opinions, even if they were not similar to those of their parents.

Over the years, Anbara’s personal life had become associated with some of the big names in history, starting with her relationship with Abdel Ghani al-Arayssi, the editor-in-chief of the newspaper al-Mufid, for which she wrote for a while. They were said to have shared a passionate affair in the 1910s that remained a secret.

Anbara used to secretly meet her lover at the home of her friend Chafika Ghorayeb. But their passion was quickly overtaken by politics and blood: Djemal Pasha, the Ottoman Minister of the Navy, repressed Arab nationalism with an iron hand. 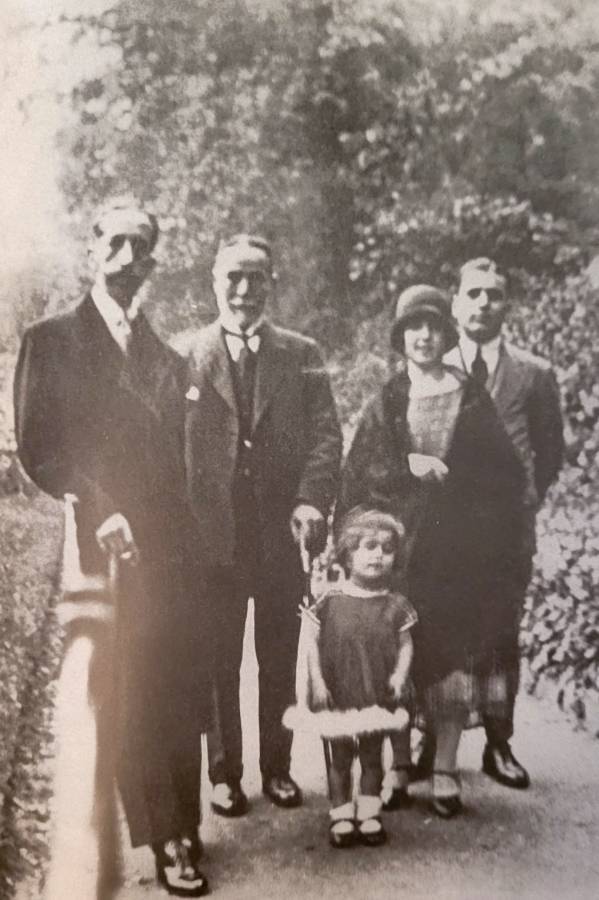 Anbara donning a cloche hat in London in 1925, with her father, her brother Saeb, her sister Racha and King Faisal of Iraq. (File photo, courtesy of the family)

Arayssi was executed at the “Place des Cannons” in Beirut, on May 6, 1916, along with 15 other activists.

Although the couple were considered engaged, Anbara decided not to get married.

But she never lacked suitors. Ever since she was 10 years old, men jostled to ask her father for her hand in marriage.

“She always answered that she would choose her husband when the right time came,” Aliya al-Khalidi, her granddaughter said, in an interview with L’Orient-Le Jour. “This was a rather rebellious attitude for a teenager from a Sunni bourgeois family in Beirut,” she added.

‘She carries rebellion in her heart’

After the assassination of her lover, Anbara left with her father for Great Britain, where she stayed for two years.

One day, while Abu Ali and his daughter were walking in a London park with King Faisal of Iraq, the latter reportedly asked Anbara what she thought of English women.Her answer was scornful: “I really don’t know what the English women have done to God to give them so much freedom, while we Arab women have been given repression, humiliation and tyranny.”

Taken aback, King Faisal told Salim Salam to be careful because his daughter “carries rebellion in her heart.”

The stay in London allowed Anbara to get in touch with many British feminists and associations working for gender equality in the UK. She was curious to understand and learn more about their way of working. 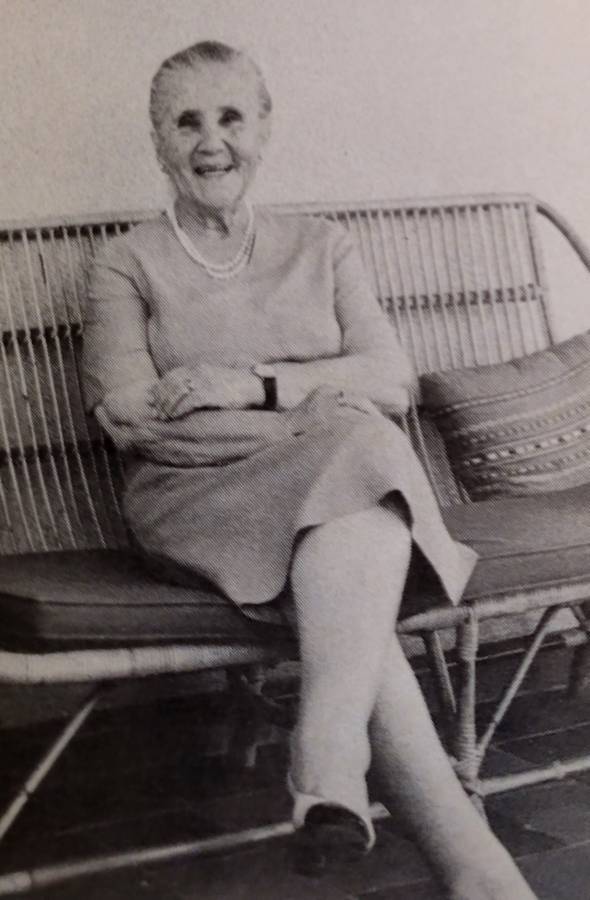 Anbara Salam Khalidi in the 1970s. (File photo, courtesy of the family)

When she returned to Lebanon at the age of 29, she continued her fight for women’s emancipation, especially for Muslim women, not only in her country but in the region.

She was opposed to the veil, especially since she was exposed to other women in London who did not wear a headscarf.

On the outside, however, Anbara did not come across as a passionate woman.

“She did not strike you as a hardcore revolutionary. The young Beiruti woman had a calm and discreet temperament,” her granddaughter said.

She was more of an intellectual than an agitator. She spoke with a soft voice and was very polite. But she was known to have a force within her that expressed itself in a quiet and serene way.

Her actions against the “system” were specific and punctual. This was how her rebellious side manifested itself. And this was what would make her famous in Lebanon and the Levant.

She was the first to translate the Iliad and the Odyssey into Arabic. Anbara and friends from her generation also founded several groups — The Awakening of the Arab Woman, the Social Club of Young Muslim Girls and The Renaissance of Women — the first such associations for Muslim women in the region.

Her fight aimed at giving Arab women their full place in society, to make their voices heard and respected.

Her fame spread like wildfire throughout the Levant until reaching Jerusalem, and more precisely Ahmad Sameh al-Khalidi, a well-known Palestinian educator, and at the time the director of the Arab University of Jerusalem in Palestine.

“He was an intellectual of great value. So was his family. They owned the oldest library in Jerusalem,” Tammam Salam said.

Seduced by the adventures of the young Lebanese woman, which he had read about in the newspapers, he asked a colleague at AUB to arrange a meeting with her.

“The meeting finally took place at Julia Tohme’s house, and it was love at first sight,” Aliya al-Khalidi said.

The two married, had three children and settled in Jerusalem, where Anbara supported political and feminist activities.

She also contributed to a radio program devoted to famous Arab and Western women in history.

According to her granddaughter, “Anbara saw it as the responsibility of Palestinian women to lead their own struggle for emancipation. She did not want to actively participate but helped them quietly by advising them behind the scenes.”

The couple returned to Beirut in 1948, in the wake of the Nakba. Anbara’s struggle continued after the death of her husband in 1951. She died in 1986.

In 2016, Aliya al-Khalidi presented a play about Anbara’s youth at the Babel Theater in Beirut, which was deemed by critics as being contrary to religion.

“I had to personally intervene with the general security to explain to them that removing the veil is not against religion and Islam, just to explain to you that almost 100 years later, her actions are still being debated,” Tammam Salam lamented.

This article was originally published in French at L’Orient-Le Jour. Translated by Sahar Ghoussoub.

It was the year 1927, on a Sunday like any other at the American University of Beirut, where conferences on a variety of themes were regularly organized.That day, Anbara Salam was invited to give a lecture entitled “An Oriental Woman in London.” She had just returned to her native Lebanon after spending two years in the English capital with her father, Salim Salam, a respected dignitary in...