In part three of L’Orient-Le Jour’s series on women who had an impact on the region, we meet Lotfia Elnadi, an aviator who broke social boundaries in 20th century Egypt. 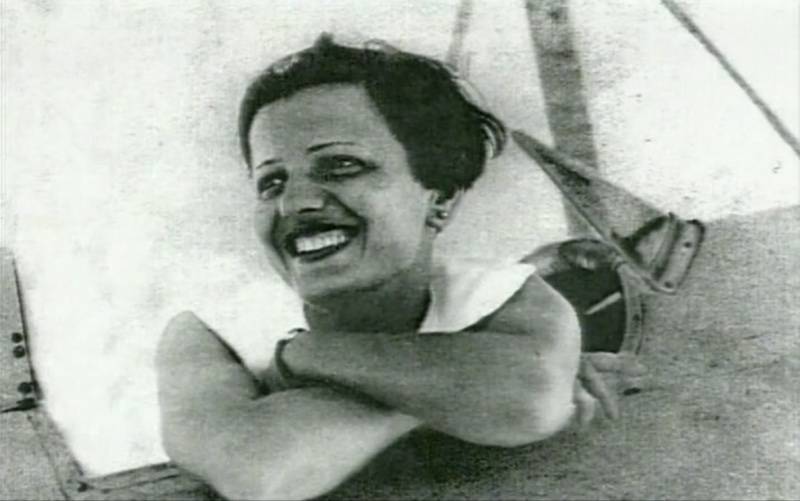 Screenshot taken from the 1996 film “Take off from the Sand," by Wageh George.

A short tomboy-style haircut, a determined look, and a smile on her lips, she appears lying on the grass, surrounded by men all taller than her. In another photo, she leans against a propeller plane.

“Happy.” This is how Lotfia Elnadi once described her younger self, as she was sifting through her photos.

Her story began in Cairo at the beginning of the 20th century. Elnadi was an audacious young woman who had her head in the clouds — literally.

She was able to break through traditional shackles and make her dream come true: She wanted to fly.

Elnadi was the first female pilot in the Middle East and Africa, although she remains little known to the general public.

A documentary on her life was released in 1996, directed by Wageh George.

With her gray short hair and undeniable elegance, the filmmaker describes Elnadi, who welcomes him into her home at nearly 90 years of age, as “an open-minded spirit, a very liberal, modern, free woman, and very young in her attitude.”

Nadi was passionate about freedom. Fighting for it was a principle she lived by her entire life. Perhaps it was an unconscious homage to the person who raised her since her birth in 1907 in an upper-middle-class Egyptian family — an emancipated, formerly enslaved woman who remained in the family by choice, according to Elnadi and from whom she says she received “the best education.”

At the American girls’ school she attended in the Egyptian capital, she was jealous of those who were allowed to visit their friends. At one point, she even wished she could swap parents with her cousin.

“The excessive pressure I was under made me love freedom,” she told George, the film director, in a firm yet mischievous tone, as if to justify her journey.

An avid reader, she was particularly interested in journalist Ahmad al-Sawi's travel accounts published in the daily Al-Ahram. At a time when aviation was still a fledgling industry in Egypt, Elnadi had the audacity to seek out the journalist in order to step into this world of men that fascinated her.

One day, she knocked at Sawi's office door. Confidently, she introduced herself and told him that she wanted to become a pilot.

“I wondered why men could fly and not us. We should be the same, and that’s what made me pursue it,” she recalled decades later, in her 90s, when talking to George.

While she admitted that she did not seek her parents’ prior approval, her determination convinced the newspaper columnist to agree to a meeting with her mother.

Fearing the danger inherent in flying at the time, she did not forbid her daughter to take flying lessons. Still, she refused to finance them, for fear of bearing the guilt should something bad happen to her daughter.

It is thus by her own means that Nadi pursued her passion, braving a conservative society at odds with her thirst for emancipation.

In May 1932, the Egyptian government built the Almaza airport in the sandy area of Heliopolis, on the outskirts of Cairo, to accompany the founding of EgyptAir. 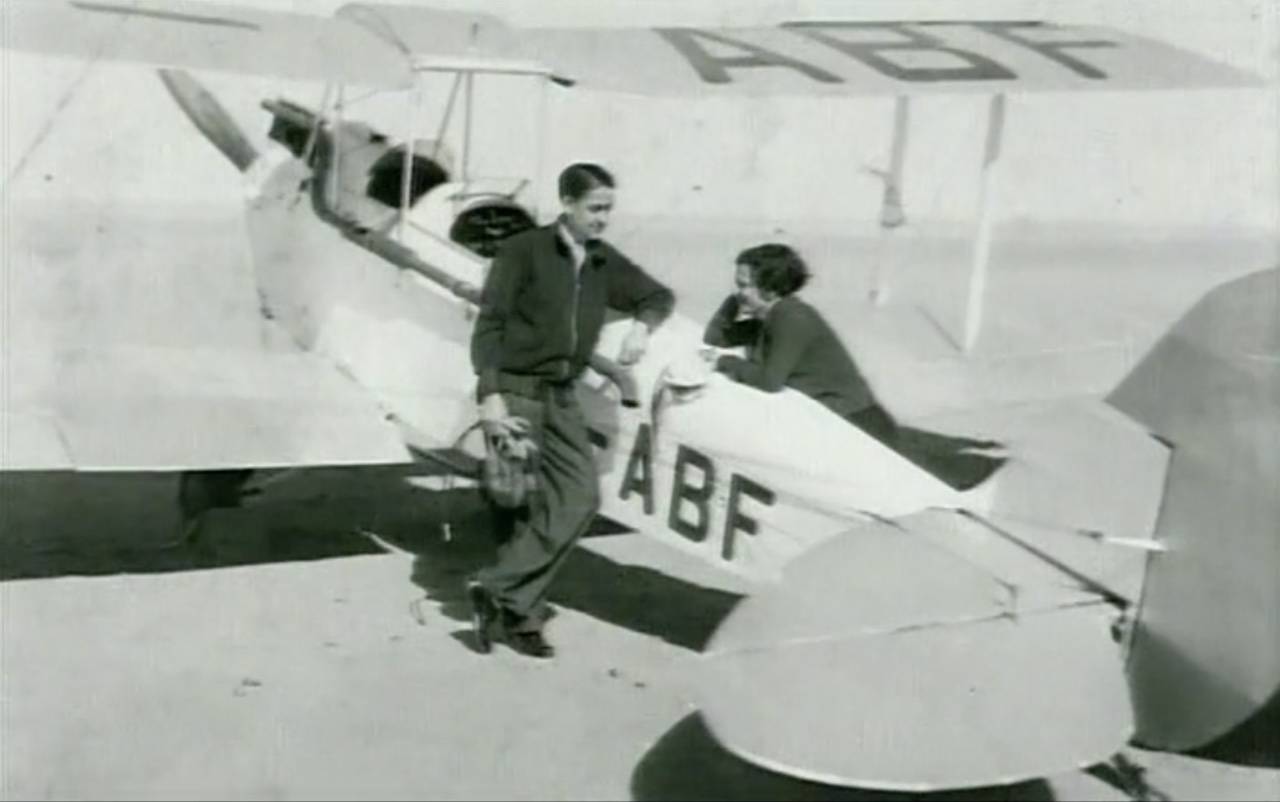 Screenshot taken from the 1996 film “Take off from the Sand," by Wageh George.

It was the first airline in the Middle East and the seventh in the world. It was also offering training courses to young aspiring aviators, as well as flight experiences for socialites.

Introduced by Ahmad al-Sawi and armed with unshakeable resolve, Elnadi, the pilot-to-be, landed a job as a switchboard operator for EgyptAir. She was in charge of welcoming the candidates to the aviation school, some of whom were surprised by the unusual female presence on site.

Sometimes, she sneaked into the planes that were slated to make test flights after certain repairs, surprising the pilots mid-flight. They were annoyed at her antics, but their irritation never lasted too long.

The young secretary managed to afford lessons, sometimes as short as only five or 10 minutes, depending on her budget.

Because of her small size, special rudder pedals were installed for her. She also stacked three cushions under her to be comfortable in the two-seater planes.

Her teacher was Dan Karol, an ambitious English instructor who was proud to train the first Egyptian woman pilot. The young Elnadi would never forget his words of encouragement for her: “Be patient. If you have a crash, no other woman will try.”

On the 67th day of training, he said to her “you’ve got it!” Instantly, as she felt exhilarated, she became impervious to his instructions. After all, her dream was to fly solo.

In 1933, she obtained her pilot’s license, bearing the number 34 — a certificate granted to only 33 people, all of them men, before her in Egypt. She was 26.

On this occasion, the famous Egyptian feminist Huda Shaarawi, Nadi’s role model at the time, sent her a word of congratulations and support.

The young pilot admired Shaarawi’s thirst for emancipation, particularly her rejection of the institution of marriage, which would echo in all her own future decisions.

Recalling her long-awaited first solo flight, Elnadi told George she felt ecstatic: “I felt like I owned the world, I thought freedom, freedom, the thing I always dreamed of.” 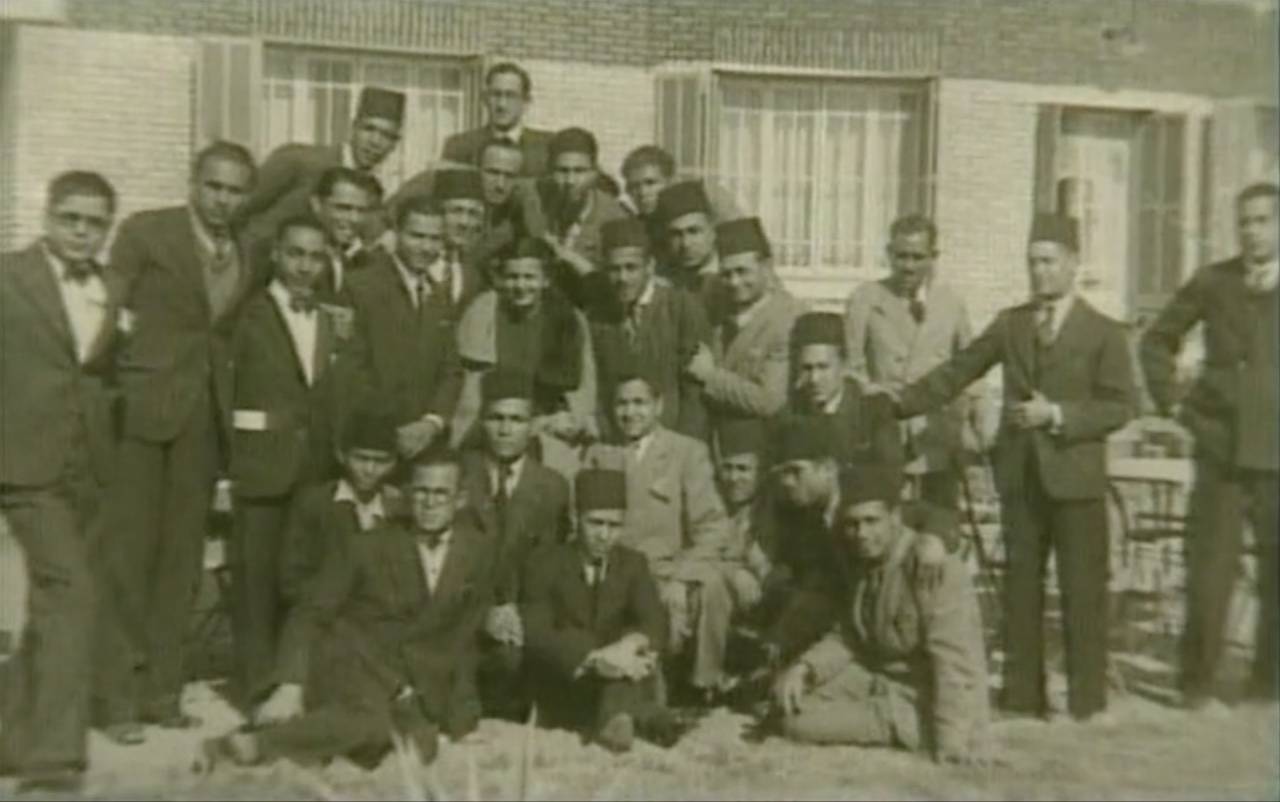 Lotfia el-Nadi, the only woman among the first apprentice aviators in Egypt. Screenshot taken from the 1996 film “Take off from the Sand," by Wageh George.

Her father, who discovered Elnadi’s ambitions with dismay when she graduated, hesitated on how to react. Nevertheless, he was her first passenger, braving his fear of flying to enjoy a trip between the pyramids.

At a time when flying was seen as a sport, or even a hobby, she refused to consider a career in aviation, wishing to keep the freedom to choose when and for what purpose she took the controls.

“If I had been forced to do it, I would have hated it,” she said, without regret.

Seven years after having obtained her pilot’s license, it was a bad fall from a ladder that abruptly ended the dreams of this determined woman, affectionately known by many as “Mama Lotfia, or Mother of Aviation,” George told L’Orient-Le Jour.

Injured in her spine and head, she began to wear dark glasses. When she would step outside, she would hear people say, “What a hero, her plane crashed!”

“If they knew it was only a fall from a ladder,” she quipped with tenderness and self-mockery in front of the camera.

Elnadi finally went abroad to seek medical care, settling down in Lausanne in 1960, during the presidency of late Egyptian President Gamal Abdel Nasser.

This is where she began to work in the Innovation department store, where many Middle Eastern tourists in search of Western-style luxury flocked.

Thanks to her linguistic skills — she mastered French and English in addition to her native Arabic — she was even a privileged interlocutor of the royal families of the Gulf, according to her employer.

Although Elnadi was never able to fly an airplane after her accident, she happily rediscovered the sensation at the dawn of her 80th birthday, during a flight offered by her loved ones in an airplane similar to those she had once managed to tame.

For this elegant and proud woman, who died in 2002 at nearly 95, old age was no excuse to neglect her freedom.

Displaying the waiver she had signed to refuse life-sustaining treatment and to donate her organs, she sighed softly: “Please let me do what I want.”

This article was originally published in French at L'Orient-Le Jour and written using material from the documentary “Take off from the Sand,” as well as a phone interview with its director, Wageh George.

A short tomboy-style haircut, a determined look, and a smile on her lips, she appears lying on the grass, surrounded by men all taller than her. In another photo, she leans against a propeller plane. “Happy.” This is how Lotfia Elnadi once described her younger self, as she was sifting through her photos.Her story began in Cairo at the beginning of the 20th century. Elnadi was an audacious...