Murder and suicide rates up, submarine seeks shipwreck, judges on strike: Everything you need to know to start your Thursday

Here’s what happened yesterday and what to expect today, Thursday, Aug. 18. 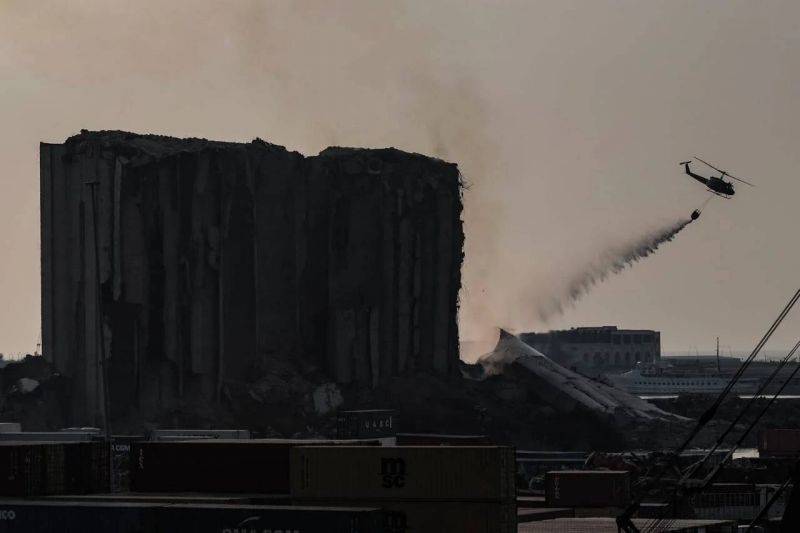 A helicopter douses the port with water following the collapse of four more silos on Aug. 4 , 2022. (Credit: João Sousa/L'Orient Today)

Forces of Change MP Melhem Khalaf confirmed to L’Orient Today the government’s decision to demolish the northern block of the Beirut port grain silos after their partial collapse, two years after they were damaged in the Aug. 4, 2020 blast. Khalaf justified the demolition, saying that the collapse of the northern block was inevitable, corroborating experts’ statements. Fires continuously raged at the silos in July until four fell on the last day of the month. Four other silos followed on the second anniversary of the Aug. 4 blast, with fires continuing until today. Authorities have said the blaze was instigated by the combination of fertilized grain and summer heat. Cabinet had previously approved the demolition of the silos, attracting controversy from the port blast victims’ relatives and civil society groups who championed their preservation as national monuments. “We’re attached to the silos…until the end of the investigation,” William Noun, the spokesperson for the families of blast victims, had said, recalling criticisms that the demolition of the silos while the blast investigation remains suspended is authorities’ attempt at imposing collective amnesia regarding the tragedy. “After cleaning the rubble, it would be possible to focus on the southern silos and work on reinforcing them,” caretaker Environment Minister Nasser Yassin said after Wednesday’s meeting, during which the demolition was decided.

More than half the country’s judges joined a strike protesting their working conditions, more than two weeks after a Banque du Liban-mandated revision to their salaries was suspended. “Several warnings that the deterioration of working conditions has surpassed its limits were issued,” the protesting magistrates said in a statement yesterday evening, according to the state-run National News Agency. The judges decried the lack of judicial independence and “dark and desolate courts.” Judges previously protested working conditions, noting issues with electricity, water and maintenance, along with the depreciation of the lira and their salaries. BDL briefly implemented a controversial adjustment to judges’ salaries in early July, allowing them to withdraw their pay at an exchange rate that would more than quintuple the lira value of their compensation. The Supreme Council of the Judiciary, the Council of State and the Court of Accounts justified the measure, citing “an adequate salary” as an essential condition to “organize the work of judges,” while some members of the judiciary considered the payment policy an unwelcome “bribe.” Partly in response to the measure and echoing judges’ complaints of deteriorating living conditions and dilapidated courthouse, judicial assistants held an almost three-week strike from July 18 to Aug. 1.

Murder cases were up by at least 18 percent and suicide cases by 7.8 percent in the first seven months of 2022, compared with the same period last year, according to Beirut-based research center Information International. The crime rate, compiled from Internal Security Forces reports, saw a more significant rise last year — theft crimes had risen 266 percent and murders by 101 percent — compared to previous data from 2019. Amid the second year of economic crisis, reports of violent crimes in Lebanon have included fratricide, assassination, rival familial and personal disputes, along with clashes pitting the army against fugitives, traffickers and gangs. Abaad, a human rights group, indicated that domestic violence is also on the rise. A woman who was allegedly burned alive by her husband last week, while she was five months pregnant, died of her injuries yesterday in a hospital in Tripoli, North Lebanon, her uncle told L'Orient Today. The same day, a man was arrested after being filmed beating at least three children in a field in the Ghazzeh region, in West Bekaa.

A collaborative salvage mission between the Lebanese Navy and Australian rescue services deployed an Indian-registered submarine to extract the bodies of around 30 people still reportedly trapped in the shipwreck site of an irregular migrant boat that sank in April. On April 23, nearly 85 passengers boarded the boat, which was reportedly heading for Europe. The vessel, however, was intercepted by the Lebanese Army about 5.5 km from the Lebanese coast before sinking. Around 40 people are believed to have died in the tragedy, many of them women and children who had reportedly been inside the cabin of the boat.

In case you missed it, here’s our must-read story from yesterday: “A book, a ban and a fatwa: The Lebanese connection in three decades of Rushdie censorship and controversy.”

Want to get the Morning Brief by email? Click here to sign up.Forces of Change MP Melhem Khalaf confirmed to L’Orient Today the government’s decision to demolish the northern block of the Beirut port grain silos after their partial collapse, two years after they were damaged in the Aug. 4, 2020 blast. Khalaf justified the demolition, saying that the collapse of the northern block was...