On World Refugee Day, a look at where Lebanon’s Syrian refugees stand 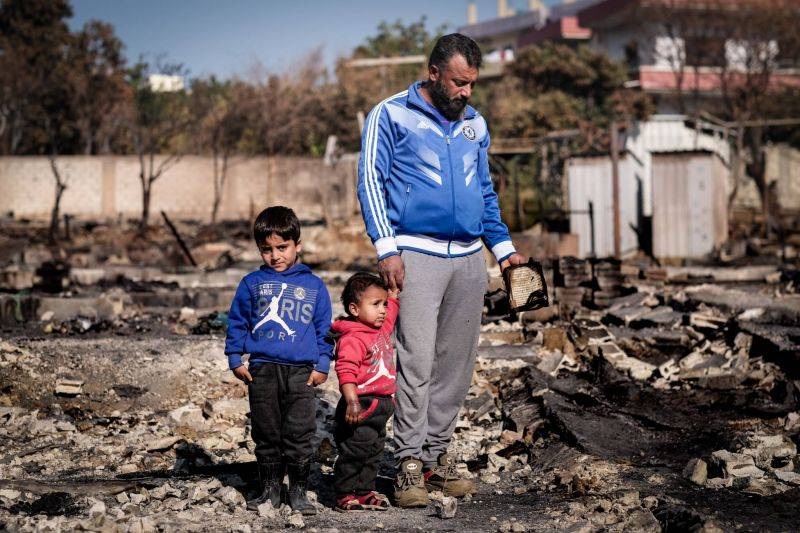 A Syrian refugee stands with his children on the rubble of their camp in Bhanin, which was torched in December 2021. (Credit: João Sousa/L’Orient Today)

BEIRUT — On World Refugee Day, officials launched a call for more international aid to Lebanon to cope with the effects of the Syrian crisis, while a Lebanese minister announced he will launch a plan for the return of the refugees and the prime minister threatened to step up deportations if the international community does not assist in returning them to Syria. L’Orient Today takes a look at some of the facts and misconceptions surrounding Syrian refugees in Lebanon.

How many Syrian refugees are there in Lebanon?

There are currently some 839,000 Syrian refugees registered with the UN refugee agency (UNHCR) in Lebanon. The actual number present in the country is unknown, because the Lebanese government requested UNHCR to stop registering new refugee arrivals as of 2015 — those who arrived after this may be recorded by UNHCR and can receive aid in some cases, but are not officially registered. While officials frequently cite an estimate of 1.5 million registered and unregistered refugees in Lebanon, this figure dates back to 2015, when the number of registered refugees was considerably higher than it is today, reaching nearly 1.2 million. Since that time, a large number of refugees have left for Europe or other third countries — either through the UNHCR resettlement process, other legal routes or via smuggler routes — while some have returned to Syria.

How much aid do the refugees receive?

As of 2021, 88 percent of Syrian refugees in Lebanon were living in extreme poverty, according to an annual UN survey — this is compared to early 2019, prior to Lebanon’s financial meltdown, when the number stood at 55 percent. The number of refugees receiving international aid also increased during that period. In June 2021, about 75 percent of refugee households surveyed were receiving cash assistance, compared to 47 percent in August 2020. Refugees living in some areas were more likely to be receiving such aid — in the Akkar, Baalbeck-Hermel and Bekaa governorates, more than 90 percent of refugees were getting some form of cash aid, while in Beirut, only 26 percent were.

A spokeswoman for UNHCR said in a statement that as of May, UNHCR and the World Food Programme combined were reaching some 262,000 families with cash assistance, or 98 percent of those deemed “severely vulnerable.”

Prior to the financial crisis in Lebanon, refugees who received cash assistance from the UN to buy food and basic needs were receiving $27 per person per month. Since the crisis, contrary to the common perception in Lebanon that refugees receive international assistance in dollars, the payments have been made in Lebanese lira at varying exchange rates. Currently, some families receive assistance of LL1 million (about $35 at the current parallel market rate) per month, while others get LL500,000 (about $18) per person. Some, but not all, receive both. The aid amounts were increased in April — previously they stood at LL800,000 per household or LL300,000 per person.

The UNHCR spokesperson added, “This long overdue increase allowed UNHCR and WFP to support refugee families living in extreme poverty with an amount that is closer to the survival minimum … or the survival line — which still exceeds the value of the increased amount of assistance.”

The tragic sinking of a smuggler boat off the coast of Tripoli in April — in which seven people were confirmed dead and 33 remain missing — drew attention to the increasing number of Lebanon citizens who have been attempting to leave the country through illegal and dangerous routes. But the vast majority of those boarding smuggler vessels headed to Cyprus or mainland Europe are still Syrian refugees.

In 2021, when at least 1,570 people were recorded by UNHCR as having left Lebanon via “irregular boat departures,” some 72 percent of the passengers were Syrian. The UN data shows a significant increase in people boarding smuggler boats since the crisis — from 270 passengers in 2019 to 794 in 2020 to 1,570 in 2021. In 2022, UNHCR had recorded 597 people attempting the journey as of last month — the number of passengers between January and April showed a 212 percent increase from the same period in the previous year.

Amid an increasing crackdown by Cypriot and Lebanese authorities on smuggler boats — which resulted in the deportation of some passengers to Syria — others have turned to alternate roads, including overland through Syria and Idlib to Turkey; by air to Libya, with plans to then go by sea to Europe; and last year, on planes to Belarus, which was readily handing out tourist visas at the time, and then by land to the European Union.

“While the desire to move onwards is likely to increase, this is likely to be mitigated by a number of factors including people’s ability to pay for smuggling fees or air travel,” noted a document summarizing a recent inter-agency meeting of Lebanese and UN officials.

Returning to Syria – voluntarily or not

While an increasing number of refugees have attempted to move on from Lebanon to Europe or elsewhere, the number returning to Syria — which had been gradually increasing before the economic crises in Lebanon and Syria and the COVID-19-related border closure — has fallen significantly.

Since 2016, UNHCR has recorded about 69,400 registered refugees who have voluntarily returned to Syria from Lebanon. In 2019, the peak year for returns, UNHCR recorded some 22,700 “voluntary returns” of Syrian refugees from Lebanon.

At the time, Lebanese General Security was organizing return trips in which it would take the information of Syrians interested in going back and would then share the names with Syrian authorities to ensure that the returnees were not wanted for arrest — which is one of the main fears preventing refugees from going back to Syria. Human rights groups have documented numerous cases of returnees who were arrested upon their return and subsequently were tortured or died in detention. General Security would then provide buses to take the refugees across the border.

Meanwhile, however, the number of cases of deportation of Syrian refugees by Lebanese authorities has increased. The Access Center for Human Rights, a non-governmental organization based between Lebanon and France and focused on the conditions of Syrian refugees in Lebanon, recorded 59 cases of “arbitrary deportation” in 2021, compared to 2020, when only two cases were recorded, “due to the closure of the borders between the two countries as a result of the COVID-19 pandemic,” and also showing an increase since 2019, when the group recorded 42 cases.

The vast majority of documented deportation cases in 2021 — 51 — were of people who left Lebanon towards Cyprus via smuggling boats and were forcibly returned to Lebanon by the Cypriot authorities. Lebanon’s internal policies allow for deporting Syrians who entered the country via smuggling after April 24, 2019. However, 18 of those deported in 2021 had entered Lebanon legally, with 15 of them being registered with UNHCR.

Lebanese officials signaled Monday that those numbers may increase further.

At the launch of an appeal for an additional $3.2 million in international funding to address the effects of the refugee crisis on Monday, Social Affairs Minister Hector Hajjar said that he is planning to announce a new plan for the return of the refugees, while Prime Minister Najib Mikati called on the international community to “cooperate with Lebanon to return the displaced Syrians to their country.”

He added, “Otherwise, Lebanon will have a situation that is not desirable for Western countries, which is to work to get the Syrians out of Lebanon by legal means, through the firm application of Lebanese laws.”

BEIRUT — On World Refugee Day, officials launched a call for more international aid to Lebanon to cope with the effects of the Syrian crisis, while a Lebanese minister announced he will launch a plan for the return of the refugees and the prime minister threatened to step up deportations if the international community does not assist in returning them to Syria. L’Orient Today takes a look at...