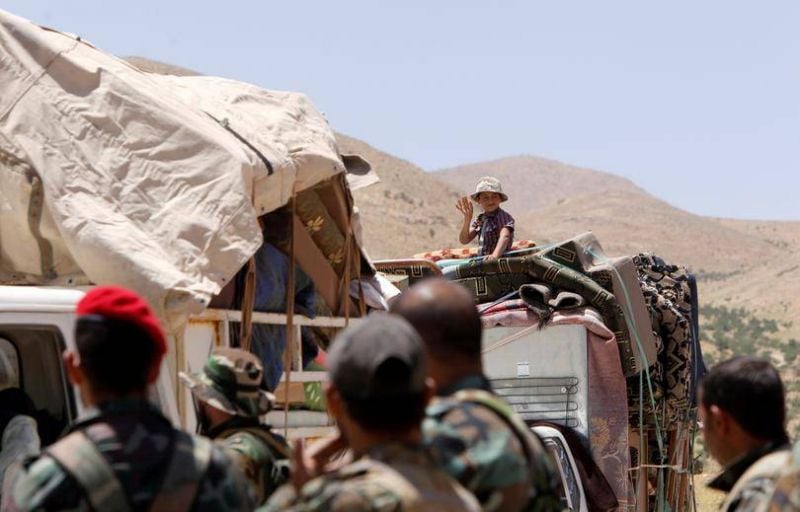 A Syrian refugee boy who left Lebanon gestures as he arrives in Qalamoun, Syria, in June 2018. (Credit: Omar Sanadiki/Reuters)

BEIRUT — Attorneys and human rights groups representing six Syrian men who were arrested outside their country’s embassy in Lebanon last month are seeking to halt their pending deportation, arguing that it would violate local and international laws.

The men — identified in a complaint filed by their attorney as Toufic al-Haji, Ammar Qazah, Mohammed al-Waked, Mohammed Abdelillah, Ibrahim al-Shammari and Ahmad al-Eid — were arrested in two separate incidents on Aug. 24 and Aug. 27 in front of the Syrian Embassy, under circumstances that remain murky.

Five of the detainees are from Daraa, a well-known bastion of opposition to the government of Bashar al-Assad and the site of recent fighting between government forces and rebels. At least four are known opposition activists, according to human rights groups tracking the case.

The Lebanese Army said in a statement issued after the arrests that the detainees had entered the country illegally and had been handed over to General Security.

Lebanese authorities issued a deportation order for the men on Sunday, giving them 24 hours to leave Lebanon for a third country or be deported to Syria.

Mohammed Sablouh, the men’s attorney, filed a motion on Monday before Court of Cassation Public Prosecutor Ghassan Oueidat seeking to stop the deportations, arguing that they would violate the United Nations Convention Against Torture, to which Lebanon is a signatory, because it “will expose them to the risk of beatings, torture and death.” It also argued that the way the men were arrested violated Lebanon’s Code of Criminal Procedure.

A substantial hurdle remains in the way of the men’s ability to travel to any third country, Sablouh said, because their passports are still in the possession of the Syrian Embassy, which has so far refused to hand them over to a lawyer unless an immediate family member is present.

Sablouh said he and a group of the detainees’ relatives plan to go to the embassy on Wednesday morning to try again to retrieve them.

The circumstances of the arrests are disputed. Initial reports had said they were “kidnapped” from the embassy, an allegation the embassy denied as “baseless” and as “malicious rumors.”

The Lebanese Army later issued a statement saying its intelligence directorate had arrested six Syrians for having entered Lebanon illegally and turned them over to General Security.

However, the complaint filed by Sablouh alleges that the detainees “fell victim to a trick prepared by the Syrian embassy.” The four men arrested on Aug. 27 had applied for passports and were called by the embassy to tell them to come and collect them, Sablouh said. However, before entering the facility, they were stopped by unknown men who spoke in the Syrian dialect, and were then blindfolded and taken to an unknown location for interrogation before being handed over to Lebanese authorities, the attorney said.

A group of human rights organizations issued a statement on Monday calling on Lebanese authorities to reverse the deportation orders, which they argued were issued “without regard to the well-founded risks they may face in Syria, including detention, enforced disappearances, torture, and other possible human rights violations.”

On Tuesday, Amnesty International released a report detailing incidents of alleged torture and deaths in detention among other refugees who had returned to Syria, both voluntarily and by deportation, from countries including Lebanon.

Following interviews with returnees and their relatives, Amnesty researchers documented 66 cases — 13 involving children — of Syrians who were allegedly “subjected to serious violations upon their return.” Thirty-nine of the cases had returned from Lebanon; most of them had returned voluntarily, while two had been deported.

The report listed 14 cases in which security officials had sexually assaulted detainees, including a 13-year-old boy and a 5-year-old girl. At least five detainees died in custody, and the fates of another 17 are unknown, the report said. Of 43 returnees who were detained but later released, 13 reportedly fled to Lebanon again.

Before the Lebanese-Syrian border closed in early 2020, at the beginning of the COVID-19 pandemic, Lebanese General Security used to periodically organize “voluntary return” trips for Syrians willing to go back to their country.

Would-be returnees would register with General Security, and Lebanese authorities would then check the list of names with Syrian officials to ensure that they were not on any “wanted” list and were allowed to return.

However, the Amnesty report alleged that among the Syrians who returned via these trips whom the researchers had interviewed, “Syrian security officials … arbitrarily detained five of the interviewees and nine of their husbands or brothers.”

In a statement released by General Security last month, the agency asserted that “no incident has been recorded regarding any Syrian citizen who returned to his country under the auspices of General Security and under the supervision of the United Nations agencies operating in Lebanon.”

Lebanese authorities have deported Syrian refugees in the past, citing a 2019 decision that allowed for forcible removal of Syrians who had entered Lebanon illegally after April 24 of that year. At least 15 Syrian refugees were deported in early June, including five who had tried to flee from Lebanon to Cyprus by sea via smugglers but were turned back by Cypriot authorities.

BEIRUT — Attorneys and human rights groups representing six Syrian men who were arrested outside their country’s embassy in Lebanon last month are seeking to halt their pending deportation, arguing that it would violate local and international laws.The men — identified in a complaint filed by their attorney as Toufic al-Haji, Ammar Qazah, Mohammed al-Waked, Mohammed Abdelillah, Ibrahim...