An opposition toehold in Parliament and defiance from the political class, a falling lira and kids injured from celebratory bullets: Everything you need to know about yesterday and the elections to start your Wednesday

Here’s what happened yesterday and what to expect today, Wednesday, May 18, and the upcoming week 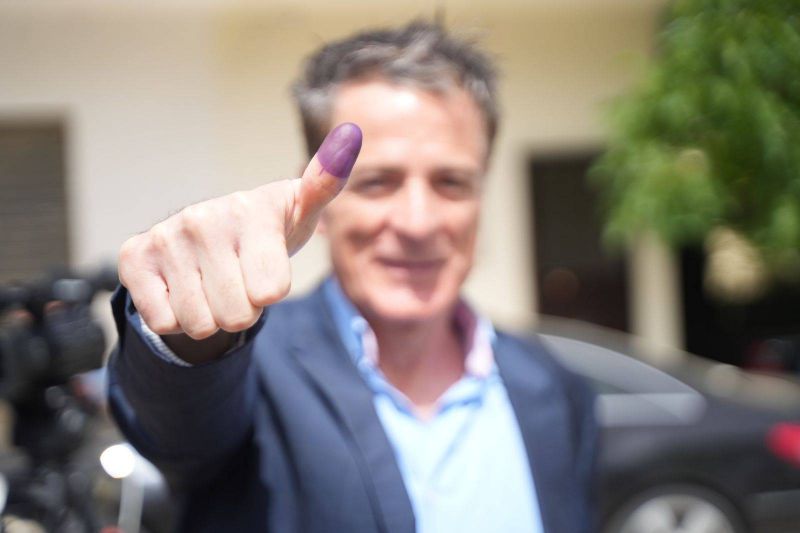 Elias Jaradeh, former candidate and recently-confirmed MP, posing for a picture after submitting his vote on May 15. Jarade and Firas Hamdan won two seats in South III, ousting Marwan Kheireddine, the chairman of AM Bank and a former minister. (Credit: Mohammed Yassin/OLJ)

Official results are in for Lebanon’s legislative elections, with the incoming Parliament set to be a highly contested one: Hezbollah and its allies have failed to hold on to their blocking majority as former Prime Minister Saad Hariri’s Future Movement’s boycott left a vacuum for other contending parties to fill. The Lebanese Forces dethroned their archrivals, the Free Patriotic Movement, as Parliament’s largest Maronite (and Christian) party, nabbing 19 seats. That number makes Samir Geagea’s party the largest single party in the legislature, a record previously held by the Future Movement, an entity now absent from Parliament. The Amal Movement, whose head Nabih Berri has presided Parliament as Speaker for a notable 30 years, won 14 seats, while allies Hezbollah reeled in 13 seats, accumulating some of the highest popular vote tallies in several districts across the country. Many Lebanese were disappointed that the first elections since the Oct. 17 popular uprising and the country’s financial meltdown — which the World Bank has described as one of the worst economic crises in modern history — witnessed a lower turnout than in 2018. However, candidates considered belonging to the opposition won a record 13 seats. These wins included surprise upsets, such as that of Elias Jaradeh, who succeeded in popping the Hezbollah-Amal bubble in Marjayoun-Hasbaya, and Firas Hamdan, a fellow candidate on the “Together Towards Change” list, who defeated Marwan Kheireddine, a prominent banker and former minister running on the Hezbollah-Amal list.

A European Union Election Observation Mission that monitored Lebanon’s elections has released its preliminary report. It said the process was “overshadowed by widespread practices of vote buying and clientelism, which distorted the level playing field and seriously affected the voters’ choice.” However, its Chief Observer György Hölvényi praised the fact that the elections had gone forward at all and deemed the results “valid.” The EU observers were stationed around the country from March 27 and on election day they visited polling centers in all districts and sub-districts. While all but one of the EU teams were able to observe the closing of stations and counting of votes without restrictions, the report said, an observer team in Rashaya “was expelled from a polling station by the Lebanese Armed Forces and only allowed back in when the counting process had finished.” While delegation head Brandon Benifei noted that a “huge injection of foreign funds” to the campaigns had fed into a "widespread practice of vote buying,” he declined to specify the sources of said foreign funds.

Politicians from establishment parties on the apparent losing end of the election results gave reactions that ranged from threatening to conciliatory. Hezbollah parliamentary bloc head MP Mohammad Raad yesterday warned his future opponents in the incoming Parliament against being “fuel for a civil war,” acting “as shields for the Zionists and the Americans'' and opposing a national unity government — apparently a jab at the Lebanese Forces and other Hezbollah rivals. After winning one of three parliamentary seats for Nabatieh, South Lebanon, Raad adopted a defiant, perhaps somewhat threatening tone. During a meeting in Nabatieh Tuesday, the National News Agency quoted Raad saying, “We are very tolerant, but we will surprise you.” Meanwhile, in a post-election press conference last night, FPM leader Gebran Bassil invited new opposition MPs to join his party, calling on the newcomers to “see what the Free Patriotic Movement has accomplished … and I assure you that after that, they will want to work with us.” The invitation was greeted with some skepticism in opposition circles as Bassil (the subject of a much-rehearsed, and insulting, protest song) has been widely considered to be the symbol of the corrupt ruling class. Later in the evening, veteran Speaker of the outgoing Parliament and leader of the Amal Movement, Nabih Berri, adopted a conciliatory tone, listing a number of changes he believes necessary “for an electoral law outside sectarian restrictions,” including a “serious dialogue to establish a transition from a sectarian quota state to a civil one, and an expansion of administrative decentralization.” Berri has been Parliament Speaker since 1992 and, even with a minority of seats in the legislature, he is still likely to be re-appointed to the position. According to the Taif Accords, the position of parliamentary speaker must be allotted to a Shiite. On election night, Lebanese Forces boss and Hezbollah foe Samir Geagea told MTV that “electing the head of Parliament will not take place as it used to … We want a Parliament Speaker that stands for Lebanon.”

The lira’s devaluation accelerated over election weekend, dropping 11 percent since Thursday to trade at more than LL30,000 to the US dollar yesterday. Animosity between the newly-elected MPs could delay the naming of a new prime minister and the formation of a new government after the new Parliament is sworn in on May 22, which will jeopardize securing a much-needed International Monetary Fund deal and other international funding. Since this assistance will not be unlocked until serious reforms are implemented, the government must change course and draft a new plan to speed up the process or, as many experts predict, witness further social upheaval.

The United Nations Children's Fund has called for an end to celebratory gunfire, which in the past two days injured four children in the country. In a statement released Tuesday, UNICEF said that "so-called celebratory gunfire is a very dangerous tradition that needs to end.” In the wake of preliminary election results Sunday, celebratory gunfire was reported across the country and continued Monday, as final results were gradually released. The international agency appealed to community leaders and local authorities to keep children safe from harm: “No child should be pushed to participate in, witness or be a target of acts of violence.” Celebratory gunfire is illegal in Lebanon. In 2016, Parliament passed Law No.71/2016 criminalizing shooting firearms into the air and punishing gunmen with prison terms ranging from six months to three years — 10 years of hard labor plus a fine if the gunfire resulted in loss of life. Despite this legislation, “celebratory gunfire” is still commonplace. According to Beirut-based research center Information International, between 2010 and 2021, stray bullets caused an average of seven deaths and 15 injuries a year.

In case you missed it, here are our must-read stories from yesterday: “Lebanon elects a new Parliament: A breakdown of divisions, winners and losers” and “Our full breakdown of newly elected MPs by party affiliation.”

Want to get the Morning Brief by email? Sign up here.Official results are in for Lebanon’s legislative elections, with the incoming Parliament set to be a highly contested one: Hezbollah and its allies have failed to hold on to their blocking majority as former Prime Minister Saad Hariri’s Future Movement’s boycott left a vacuum for other contending parties to fill. The Lebanese Forces...