Here's what happened yesterday and what to expect today, Thursday, Jan. 27 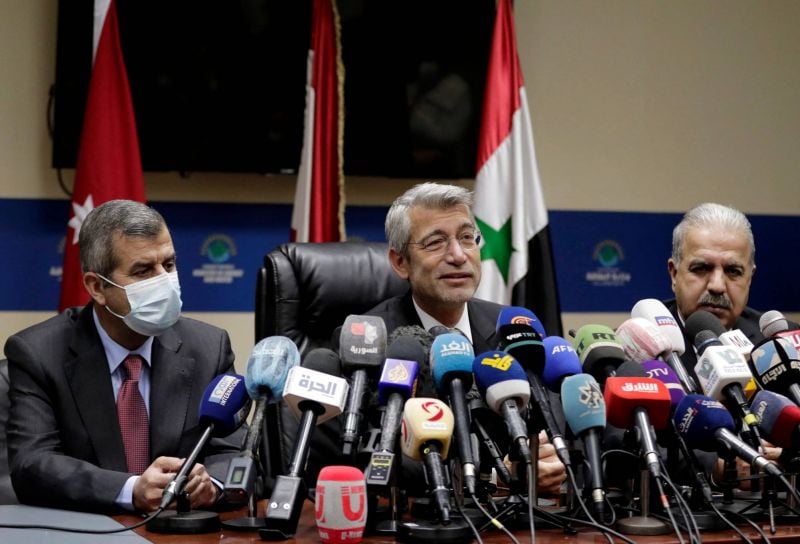 Lebanon's Energy Minister Walid Fayad, Syria's Electricity Minister Ghassan al-Zamil and Jordan's Minister of Energy and Mineral Resources Saleh Ali Hamed al-Kharabsheh speak to the press during the signing of a deal on Wednesday that will supply Lebanon with electricity. (Credit: Anwar Amro/AFP)

Lebanon signed an electricity deal with Jordan and Syria yesterday. Lebanese, Syrian and Jordanian officials signed documents consolidating a deal under which Jordan will supply electricity to Lebanon by way of Syria. According to the Energy Minister Walid Fayad, the deal should supply Lebanon with up to 250 megawatts of electricity a day, which translates to the addition of about two hours per day to Electricité du Liban’s supply. However, the Lebanese Energy Ministry claims that the electricity is not expected to reach the country until two months from now. Yesterday’s agreements represent the first of two energy deals meant to bolster Lebanon’s ailing electric grid, the second being a plan to import gas to Lebanon from Egypt through Jordan and Syria. The details of both arrangements remain murky. Financially, Energy Minister Walid Fayad has said that the project has secured $300 million in financing from the World Bank, but World Bank Regional Director Saroj Kumar Jha told L’Orient Today that the request was under consideration and would only be granted under the condition that Lebanon implement reforms to its electricity sector. Additionally, repairs need to be made to the pipeline linking Jordan to Lebanon. Moreover, the gas deal hinges on the US not applying sanctions on the countries involved under the Caesar Act, which places heavy penalties on those who do business with the Syrian government.

The finance minister has asked the cabinet not to give him powers to set the exchange rate and income tax rates. On Wednesday, Finance Minister Youssef Khalil asked the cabinet to remove Article 109 from the draft budget proposal. Article 109 would give Khalil and other ministers exceptional powers in amending tax rates and brackets over a period of two years. This provision of the draft budget was criticized by both the Free Patriotic Movement as well as the Amal Movement. Discussions on the draft budget will continue today and on Saturday and will tackle ministry expenditures. Separately, the Finance Ministry in an addendum to the draft budget said it is estimating 3 percent GDP growth for 2022, as well as an exchange rate of LL20,000 per US dollar, and a 2.33 percent deficit to GDP.

Lebanon’s central bank has extended Circular 161 until the end of February. Under the circular, the bank will continue selling dollars to commercial banks in exchange for lira at the Sayrafa rate to meet demand. This process allows banks to sell US dollars in unlimited quantities to their clients. The circular was initially released on Dec. 16 to quell the fallout from Banque du Liban’s decision to raise the withdrawal rate for so-called “Lebanese dollar,” or “lollar,” deposits in commercial banks from LL3,900 to LL8,000. BDL previously stipulated that customers could exchange their lollars for cash US dollars at the rate set by central bank platform Sayrafa for the months of December and January, but this had failed to stop the lira’s free fall, in which the parallel market exchange rate peaked at more than LL33,000 to the dollar in early January. However, after monthly lira liquidity quotas were removed in an amendment to the circular, banks began to sell US dollars in unlimited quantities. This has compressed the difference between the Sayrafa exchange rate and the parallel market rate to 1-2 percent, compared to the more than 15 percent it had previously seen.

The cellphones of Human Rights Watch regional director Lama Fakih were hacked using spyware from Israeli firm NSO. Human Rights Watch made the hacks public yesterday, saying they occurred while Fakih was working on the conflict between Israel and Hamas in Gaza, and while she was investigating the Aug. 4, 2020, Beirut blast. However, they did add that a connection between the two has yet to be established. For its part, NSO said that it was not aware of any incidents where clients used its software against Human Rights Watch staff and would look into the matter to determine if an investigation is warranted. NSO has been under fire since last year when it was revealed that its products had been used by many foreign countries to spy on world leaders, journalists and activists. It has since been sued by Apple, and last month, US lawmakers called on their Treasury and Commerce Departments to sanction NSO, saying the firm helped authoritarian governments commit human rights abuses.

In case you missed it, here’s our must-read story from yesterday: “The Future Movement is in the dark”

Lebanon signed an electricity deal with Jordan and Syria yesterday. Lebanese, Syrian and Jordanian officials signed documents consolidating a deal under which Jordan will supply electricity to Lebanon by way of Syria. According to the Energy Minister Walid Fayad, the deal should supply Lebanon with up to 250 megawatts of electricity a day, which translates to the addition of about two hours per...