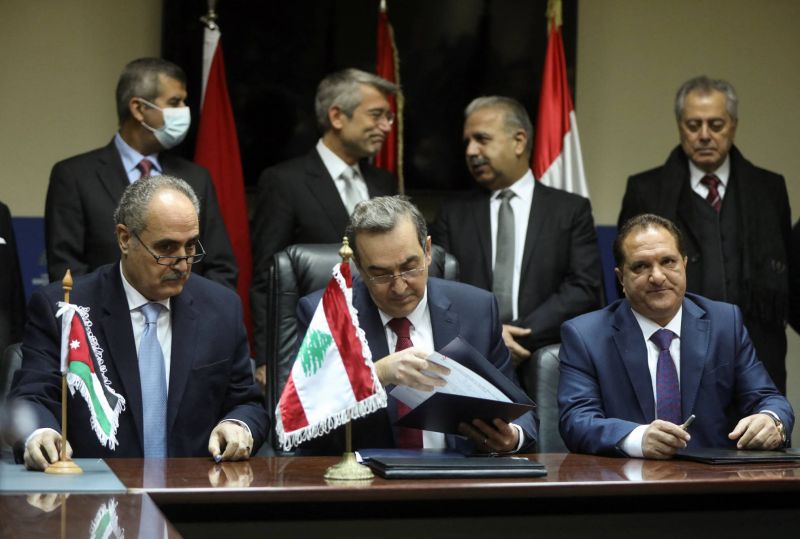 Amjad Rawashdeh, managing general director of the Jordanian National Electric Power Company, Kamal Hayek, director of Electricité du Liban and Fawaz al-Zaher, general manager of Syrian Electricity Transmission and Distribution, are pictured as they sign a deal that will supply Lebanon with electricity at the Energy Ministry in Beirut on Wednesday. (Credit: Mohamed Azakir/Reuters)

BEIRUT — Lebanese, Syrian and Jordanian officials signed documents Wednesday consolidating a deal under which Jordan will supply electricity to Lebanon by way of Syria, but key details, including the financing of the plan, are still in question.

“This is a historical moment and this deal renews our coordination with other Arab countries and we hope that we will coordinate on other issues,” Energy Minister Walid Fayad said at a ceremony to mark the deal's signing.

On his end, the Jordanian Energy Minister Saleh Ali Hamed al-Kharabsheh said that the deal “comes at the hardest times that the Lebanese are facing … and we have orders to give as much as we can to help Lebanon.”

The agreement, along with a separate deal that is still under negotiation for Lebanon to receive gas from Egypt by way of Jordan and Syria — both of which are being brokered by the United States and are expected to be partially financed by the World Bank — have been touted by international and local officials as a crucial step toward solving Lebanon’s electricity woes.

Fayad has said that the Jordanian deal will provide Lebanon with up to 250 megawatts of electricity, or about two additional hours of power per day and that the power should begin flowing in about two months.

In total, officials are aiming to increase the amount of electricity provided by state utility Electricité du Liban to eight to 10 hours a day. The cash-strapped utility currently provides about two hours of power a day, with consumers relying heavily on private generators to make up the difference.

However, there are a number of potential bumps in the road ahead. Some are financial; some are logistical, such as repairs needed to the pipeline that will transport the gas; and some are political, particularly related to the issue of sanctions on Syria.

While Fayad has said that Lebanon has already secured $300 million worth of financing from the World Bank for the projects, in fact, the loan is not yet a done deal.

The World Bank's regional director, Saroj Kumar Jha, told L’Orient Today that the World Bank is considering requests submitted by the Lebanese government to finance both the Jordanian electricity deal and the Egyptian gas deal, on the condition that the government would first adopt a reform plan for the electricity sector.

The exact amount of financing has not yet been determined, but the government’s initial request was $250 million, Jha said.

“We want World Bank engagement to help Lebanon to become financially sustainable in terms of whatever they buy from Jordan or from Egypt, so they are able to pay on their own in the medium to long term,” Jha said. “And this will require essentially a complete reform of the sector. … So, a precondition for us to go to our board of directors for approval is a comprehensive electricity sector reform program of the government, adopted by the [Lebanese cabinet], and disbursement of the World Bank funds only when they move into implementation.”

He added that the conditions “should give comfort to everyone in Lebanon, that World Bank financing essentially will be used for bringing systemic change in the sector, in terms of more transparency, better accountability, independent and better regulation, better cash revenue management in EDL, so that would allow Lebanon over a period of time to be able to pay the Egyptians and Jordanians from their own resources and they will not need more Bank money after, let's say, 18 months, which is our projection.”

Jha noted that the reform plan must be adopted before the financing package goes to the World Bank’s board for approval, which he projected could happen in late February or early March.

The deal must then be approved by Parliament. Changes made by Parliament last year to another World Bank-funded project, the Emergency Social Safety Net program, resulted in substantial delays in implementation.

Attempts to reform the energy sector in Lebanon have stalled multiple times in the past and some of the measures required might be politically controversial — particularly if the plan includes an increase of EDL tariffs.

However, a senior US State Department official who has been involved in the discussions of the two energy deals said he did not anticipate substantial delays as a result.

“We are not asking and the World Bank is not asking for the kinds of reforms that are not doable,” he said. “We're being very realistic, and it is very discreet and specific reforms that are necessary here that I believe are entirely doable, and I believe will not delay the project. I believe that the government will pass them."

In the meantime, while the World Bank funding has not yet been secured, Lebanon has been moving forward with repairs to the pipeline that would bring the gas from Syria on its own dime.

Following the signing of the deal, Fayad told L’Orient Today that repairs to the Lebanese side of a pipeline needed to import gas from Egypt would cost around $1 million and that Lebanon would cover this amount.

Chairman of the board of directors and general manager at Electricité du Liban Kamal Hayek told L’Orient Today that the section of pipeline that needs to be repaired on the Lebanese side extends for around 30 km.

Hayek also spoke about the anticipated World Bank loan to fund both activities under the deal signed Wednesday and the import of gas from Egypt, saying, “Although the number is not final, the loan will be worth around $250 million.”

On the political front, US sanctions on Syria have been the main hurdle to the energy deals. The US administration has taken the position that the deals do not fall under the purview of the sweeping Caesar Act sanctions or other US sanctions on Syria because the Syrian government will not receive any financial compensation; rather, it will take a cut of the energy.

However, there has been ongoing pushback from some, particularly from Republicans in Congress, who see the deals as a step toward normalization with the Syrian regime.

Meanwhile, another controversy erupted earlier this month after Israeli media reported that the United States had brokered a secret agreement to bring Israeli gas to Lebanon. The two countries are officially at war and Lebanese law mandates a boycott of Israeli products. Both US and Lebanese officials have denied the reports.

In a call with reporters on Tuesday, Amos Hochstein, the US State Department's senior advisor for global energy security, denied again that any Israeli gas would be sent to Lebanon.

“There is no deal done between Israel and Lebanon on gas from Israel to Lebanon, and no Israeli gas is intended to go into this system to get to Lebanon,” he said. “I foresee no Israeli gas actually ending up in the Lebanese system, regardless of how we do this."

BEIRUT — Lebanese, Syrian and Jordanian officials signed documents Wednesday consolidating a deal under which Jordan will supply electricity to Lebanon by way of Syria, but key details, including the financing of the plan, are still in question.“This is a historical moment and this deal renews our coordination with other Arab countries and we hope that we will coordinate on other issues,”...

US State Department weighs in on Lebanon elections

Lebanon has registered 119 COVID-19 cases in the past 24 hours. Two people have died, raising the death...