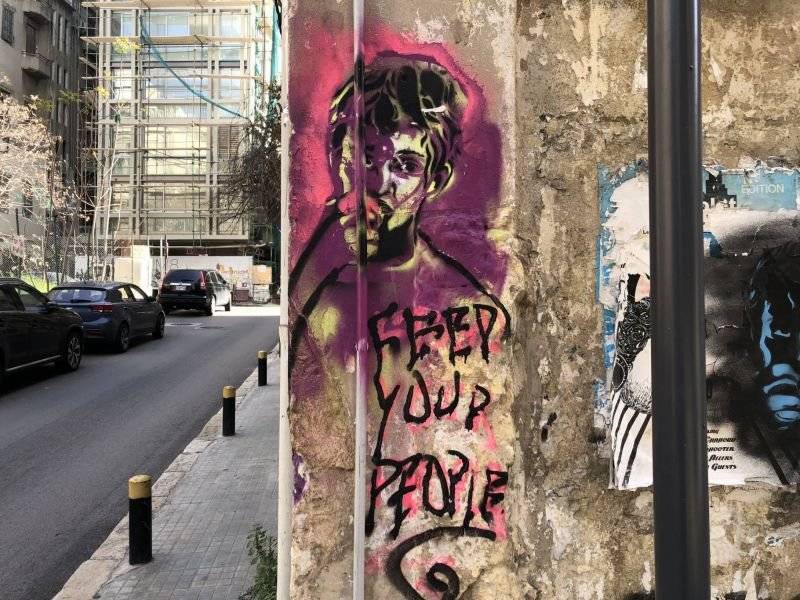 "Feed your people," reads this graffiti on a wall in Beirut in September 2021. (Credit: Philippe Hage Boutros /L'Orient-Le Jour)

Lebanon’s economic meltdown has had near irreversible consequences on critical sectors of the economy. The country’s descent into economic collapse has been quick and disorienting, with a decline in GDP per capita of a magnitude “generally associated with conflict and war,” as the World Bank pointed out. Households and individuals from different age and income groups saw a drastic drop in their purchasing power, wellbeing and opportunities as the acute financial crisis led to a more than 90 percent drop in the value of the local currency, severe shortages in basic goods and a breakdown in the delivery of public services. The share of residents with incomes considered vulnerable rose from 51 percent to 75 percent over the period, according to the International Labour Organization, while extreme income vulnerability more than doubled to 32 percent.

Persistent failures by the Government of Lebanon to put the country on the path of recovery have been disastrous. The World Bank has described this lack of action as deliberate, given that interventions to halt the economic decline would have entailed major financial losses by influential individuals and institutions. As a result, the burden of the crisis has been highly imbalanced, falling the hardest on those who were already poor or suffering from previous life-cycle vulnerabilities. With a deeply flawed social protection system, health care, education, electricity, clean water, adequate housing, transportation, and decent jobs have become accessible only to the few.

The state of poverty and vulnerability in Lebanon

Poverty has hit households hard in Lebanon in the last two years. A recent assessment by ESCWA, found that “the poverty rate in Lebanon doubled from 42 percent in 2019 to 82 percent of the total population in 2021, with nearly 4 million people living in multidimensional poverty. They represent about 1 million households, including 77 percent, or approximately 745,000, of Lebanese-national households.” ESCWA’s report helps underscore the widespread deprivation that households across Lebanon are facing when it comes to access to critical resources like electricity, water, education, health and housing, among others.

Other studies on access to resources that are fundamental to securing a dignified life also draw attention to the interrelated effects of the country’s multiple crises. A 2021, rapid damage and needs assessment of the education sector by the AVSI Foundation contended that: “The quality of learning in schools has decreased and access to in-presence and distance learning is hindered by issues such as transportation and electricity.”

Shortages in fuel — needed for electricity and transportation — as well as other critical goods were drastic in 2021. Power supply by Electricité du Liban dropped to as low as two hours per day nationwide, while an almost 15-fold surge in the price of diesel in the 10 months up to October 2021 — from LBP 17,360 per 20 liters to LBP 274,000 per 20 liters — left electricity from alternative private sources unaffordable for most households, businesses and service providers.

The health care sector was particularly hard hit. On top of electricity and fuel shortages, major deficiencies in medicines, medical supplies and staff “left some hospitals operating at 50 percent.” Those conditions put the entire population at risk, particularly vulnerable groups, including people with disabilities and an estimated 450,000 people with chronic illnesses.

Even with the continuation of some medical services, acute price inflation, estimated at more than 468 percent between 2018 and September 2021, and an almost 18-fold increase in the prices of food, forced households to make difficult decisions in prioritizing spending on their vital needs. Surveys conducted by UNICEF, the United Nations Children’s Fund, indicated that almost 60 percent of Lebanese households have recently had to buy food on credit or borrow money, and that more than one-third of children regularly skip meals. More than one in every seven households have had to completely cease their children’s education and one in 10 has sent their children to work, highlighting the absence of adequate social protection.

The unabated deterioration in macroeconomic and financial conditions today risk a wider halt in service delivery and the disastrous social cost of a long-term decline in the health, education and opportunities of future generations, cementing the drastic rise in monetary and multidimensional poverty. The surge in fuel prices following the full lifting of subsidies, and prior to the initiation or major scale-up of a social assistance program, has left households without electricity, at risk of losing access to safe water and unable to afford health care or to send their children to public schools.

Power and fuel shortages, needed for functional public water systems, risk depriving more than two-thirds of the population of safe water for drinking and sanitation. The cost of water provision from alternative sources, or private suppliers, is estimated at almost twice the minimum wage. Food safety has also become a concern, whereby cases of food poisoning are reported to have increased due to the lack of adequate storage and refrigeration. While there is no accurate data on those cases, some hospitals reported that up to five cases per day required emergency hospitalization in the month of August, a time when the health sector was also suffering from critical shortages in power, medicines and medical supplies, in addition to COVID-19 related hospitalizations.

In the education sector, the monthly cost of reaching school surged to almost 1.5 times the minimum wage, or LL900,000, according to UNICEF field surveys across Lebanon. Reaching school only represents a fraction of education-related costs. Including books and materials, now priced at the parallel market exchange rate of around LL21,000 to the US dollar (November 2021), monthly costs exceed twice the minimum wage.

The unaffordable cost of transportation also impacts workers whose incomes have remained unchanged in the past two years, including among others public sector teachers, healthcare, and social workers. Private sector workers, particularly those who are informally employed and have little to no rights and benefits—almost 55 per cent of the labor force—are now significantly worse off. Prior to the lifting of fuel subsidies, the ILO had estimated that almost three-quarters of individuals live in income vulnerability, on less than LL706,050 per month, now equivalent to the cost of slightly more than 40 liters of gasoline. Meanwhile, without wide-ranging reforms to stabilize the exchange rate, inflation is expected to continue cutting the purchasing power of workers, even against a correction in wages that would translate to an inflationary spiral, further worsening the living conditions of the poor.

The shocks brought on by the country’s economic collapse have had disproportionate effects on vulnerable groups left exposed by systemic inequities and lacking social protection schemes. Even before the crisis began, more than two-thirds of persons with disabilities (PwDs) were in the bottom income quintile of the population. With no formal financial support channels, and losses in informal ones, PwDs and other vulnerable groups, including the elderly, women and men who are primary caregivers for children or dependent family members, are in urgent need of social assistance to meet their most basic needs. Highlighting the consequences of the combined effect of the country’s crisis on existing gender inequalities in the country’s economy, a recent World Bank and UN Women gender assessment on Lebanon found that the majority of women are jobless, with 75 percent of women economically inactive.

Finally, the country's insolvency and the drastic decline of its infrastructure and crucial sectors of activity — including the financial sector — further affect the situation of households. In recent months, when the electricity crisis was at its worst, power was rationed even at the ATMs of some banks across the country, making it difficult for many businesses to operate, and for aid beneficiaries to access their assistance. Internal and overseas cash transfers, whether from family, friends or international organizations, are essential for the survival of many households and individuals who have no other means of support. As inflows of remittances and international aid account for almost 45 percent of nominal GDP at current prices in 2020 — remittance inflows were estimated at $6.9 billion in 2020, whereas international aid reached $1.7 billion — they also play a vital role in financing crucial imports and mitigating devaluation.

A broken social contract: an economy in need of saving

The severity of the crisis and lack of action by policymakers has naturally generated a larger crisis of confidence, leading to a massive exodus of students, workers and investors, forewarning of a long-term decline in human capital and further reducing prospects for recovery. The World Bank estimates that Lebanon may need 12 to 19 years to recover to its pre-crisis per-capita GDP.

While there are no accurate numbers on emigration, various syndicates have indicated that thousands of workers have left the country from 2019 to-date, including the doctors and nurses syndicates. Moreover, 2020’s Arab Youth Survey also indicated that around 77 percent of Lebanese youth aim to migrate from Lebanon.

The continued failure by policy makers to take corrective measures to stabilize Lebanon’s rapidly deteriorating depression and restore confidence in the state by implementing reforms that safeguard against the underlying drivers of the country’s crisis, such as corruption, mismanagement, and the insolvency of public institutions are undermining public confidence in the core pillars of the state, its economy, and the country’s social contract.

However, the only way to resuscitate Lebanon’s economy is through the implementation of immediate and credible institutional reform, and embarking on a path towards people-centered recovery. It is only by upending the very deliberate nature of Lebanon’s depressiont that Lebanon can be saved from descending further towards a complex emergency.

A long version of this article is also available on LCPS website.

Fadi Nicholas Nassar is a senior researcher at LCPS and assistant professor of political science and international affairs at the Lebanese American University.

Sarah Hague is chief of policy for UNICEF Lebanon

Walid Sayegh is an economic and social policy specialist at UNICEF Lebanon.

Lebanon’s economic meltdown has had near irreversible consequences on critical sectors of the economy. The country’s descent into economic collapse has been quick and disorienting, with a decline in GDP per capita of a magnitude “generally associated with conflict and war,” as the World Bank pointed out. Households and individuals from different age and income groups saw a drastic drop...