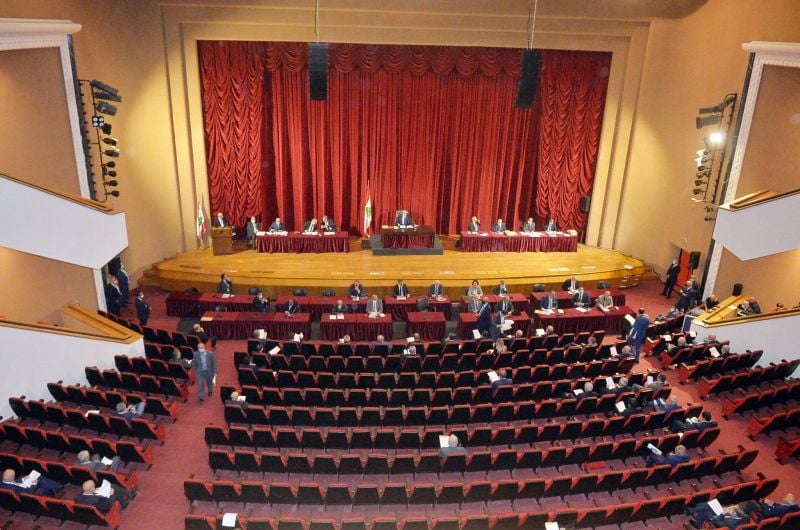 MPs convene at the UNESCO Palace in Beirut on Oct. 19. (Credit: Lebanese Parliament)

BEIRUT — The Lebanese Parliament on Tuesday voted to move up next year’s parliamentary elections from May 8 to March 27, setting the clock ticking for Najib Mikati’s “Together for the Rescue” cabinet to begin setting the country on a promised course of reforms.

The elections will be the first general vote since the mass uprising of 2019 and will take place as Lebanon has spiraled into its worst economic crisis in decades.

Discussions of changing the vote had been taking place since at least late last month, with some officials saying the change would ensure the campaign season runs smoothly by avoiding overlap with Ramadan.

Others have said moving the election date up is a means of undercutting Prime Minister Najib Mikati’s current cabinet by shortening its term.

Once a new parliament is elected, Mikati’s government will act only in a caretaker capacity until the appointment of a new premier, who will then form a government. But this process can stretch on for months; after the previous cabinet resigned, in the wake of the 2020 Beirut port explosion, more than a year passed before Lebanon’s political elite formed a government.

During his cabinet’s tenure, Mikati has promised to resume direct negotiations with the International Monetary Fund to reach an agreement on an economic recovery plan. As of Tuesday, technical discussions were underway and Mikati had asked the IMF for assistance.

Still other, more cynical observers have said the move is a strategic one by traditional parties to cement their electoral chances, curtailing the time opposition groups will have to organize ahead of the vote.

The Lebanese Association for Democratic Elections (LADE) also warned last month that there would not be enough time to hold fair and equitable elections before May, stressing that the Interior Ministry’s preparations would have had to already been underway to meet the new target date. The ministry could not be reached for immediate comment.

“God willing, the elections will be transparent and sound,” Prime Minister Najib Mikati said after Tuesday’s session, held at UNESCO Palace in Beirut.

Free Patriotic Movement leader Gebran Bassil and his parliamentary bloc opposed the date change, arguing that such a decision requires a decree issued by the president, the prime minister, the cabinet and the interior minister. He added that his bloc would challenge the move before the Constitutional Council.

Beyond the date change, several other proposed amendments to the electoral law have proved contentious in recent weeks. These includes the details of expats’ involvement, and on Tuesday the legislators decided against establishing a six-member constituency for expatriate voters. This means citizens voting from abroad will cast ballots for candidates running in the constituency in Lebanon that they are registered in.

In 2018, Lebanon’s overseas voters cast their ballots in their country of residence for the first time. The 2017 electoral law specified that six seats would be added to Parliament’s existing 128 seats to represent the voting Lebanese diaspora. However, the 2018 elections were exempt from the provision, which was expected to take effect in 2022.

Bassil criticized the move, calling it “a shame that some MPs who previously approved [of allocating six MPs for expatriates] … are now changing their position.

“Expatriates were promised six MPs of their own, which was the primary demand that they communicated when I met with them as a foreign minister,” he claimed.

A proposed law on establishing a quota for women MPs was also brought before the members for consideration and was sent back to the joint parliamentary committees for further discussion.

“The MPs expressed their opinion and pointed out ‘loopholes’ [in the law],” says MP Inaya Ezzeddine (Amal/Sur), who stormed out of a joint parliamentary committees’ session earlier this month after MPs proved reluctant to discuss the provision. Parliament Speaker Nabih Berri later pledged to place the item, which aims to improve the currently dismal representation of women in the legislature, on the MPs’ agenda.

Ezzeddine added that the parliamentarians also decided against considering the amendment as urgent. “The law was ... referred to the joint committees for revision. The committees will then submit it back to Parliament, and have no longer than November to do so.”

The last time Lebanon’s legislators convened was in September, when they gave a vote of confidence to Mikati’s new government after more than a year of political deadlock between the country’s fractious leaders.

The current session was anxiously anticipated as it brings with it legal immunities for MPs who have been summoned for questioning the Beirut port explosion investigation but who have until now failed to submit for interrogations, including Ali Hassan Khalil, Nohad Machnouk and Ghazi Zeaitar.

BEIRUT — The Lebanese Parliament on Tuesday voted to move up next year’s parliamentary elections from May 8 to March 27, setting the clock ticking for Najib Mikati’s “Together for the Rescue” cabinet to begin setting the country on a promised course of reforms. The elections will be the first general vote since the mass uprising of 2019 and will take place as Lebanon has spiraled into...

UNICEF sounds alarm on Lebanon, inflation up by triple digits again, BDL has not provided figures to IMF:...