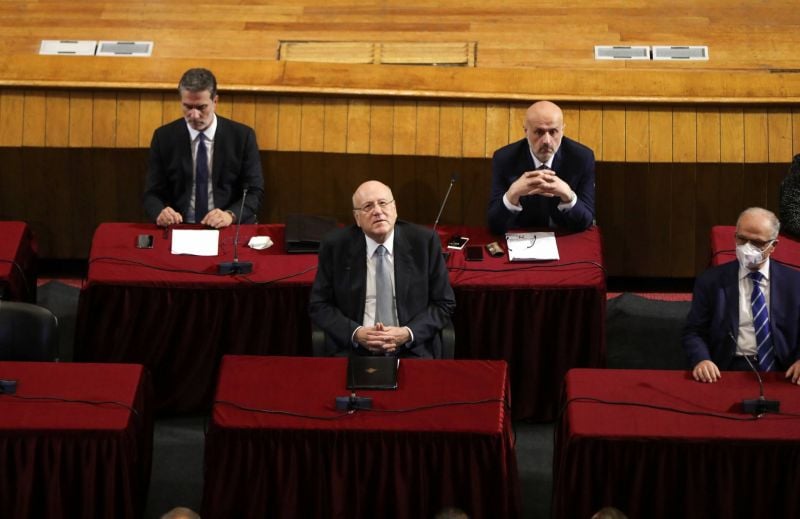 Prime Minister Najib Mikati attends a parliamentary session to discuss the new cabinet’s policy program and hold a vote of confidence at the UNESCO Palace in Beirut. (Mohamed Azakir/Reuters)

BEIRUT — Lebanon’s Parliament voted to grant confidence to Najib Mikati’s new cabinet on Monday, empowering it to officially begin its stated mission of setting Lebanon on a course of reforms that will help pull it from its multifaceted crisis.

Following an almost one-hour delay due to electricity cuts, the legislators sat through a seven-hour session, punctuated only by a two-hour lunch break, before holding a vote in which 85 MPs voted to give confidence to Mikati’s government, formed 10 days ago.

A total of 100 MPs were present for the vote, out of 117 sitting MPs. Eight legislators stepped down in the aftermath of the Aug. 4 Beirut port explosion last year and three are deceased. No by-elections have been held to replace them, despite explicit constitutional requirements to do so.

Of the 15 MPs who did not vote in favor of the cabinet, 11 belonged to the Lebanese Forces, while four were independent legislators.

Hezbollah gave the cabinet its confidence, along with its allies the Free Patriotic Movement and the Amal Movement.

The Future Movement — headed by former Prime Minister Saad Hariri — also gave the cabinet its confidence, along with its ally the Progressive Sociality Party. Hariri was notably absent from the session.

The Lebanese Forces parliamentary bloc’s 11 MPs voted against the motion, which the party had announced in a statement last week.

Prime Minister Najib Mikati began the session by reading out his nine-page ministerial statement outlining the priorities of his 24-member Cabinet. These span from weeding out political corruption to swiftly closing out the 2020 Beirut port explosion probe to resolving Lebanon’s electricity crisis.

“From the heart of the suffering of Beirut … our cabinet was born to light a candle in this hopeless darkness,” Mikati said to legislators.

He was later interrupted by Parliament Speaker Nabih Berri, who urged the premier to wrap up his reading because only a few hours of electricity had been secured.

Mikati, a two-time former premier, was tasked with forming a government almost two months ago after Hariri gave up on his own efforts to form a cabinet in July, following an almost nine-month deadlock with President Michel Aoun.

Mikati’s cabinet, which adopted the moniker “Together for the Rescue” in its ministerial statement, will take the reins of a country in the grips of its worst financial collapse in decades.

Financial insolvency has led to shortages of essential goods such as fuel and medicine in the import-dependent country. Meanwhile, donor countries have made aid conditional on reforms, including uprooting the endemic corruption that has plagued Lebanon since the end of a 15-year Civil War in 1990, when many former warlords put down their weapons and took up the mantle of politicians instead.

Legislators at Monday’s session spent several hours pointing fingers at each other and blaming rival parties for the economic collapse and for failing to implement reforms.

MP Jamil al-Sayyed (Ind./Baalbeck-Hermel) accused the new government of being divided on the basis of sectarian quotas and not as a government of specialists, as labeled by Mikati.

He blamed the economic crisis on authorities and the political elite, adding that politicians are dealing with the “corpse of a state.”

MP Gebran Bassil (FPM/Batroun) — the head of the Free Patriotic Movement and Aoun’s son-in-law — said ahead of the vote that his party would grant confidence to the government on the basis that it implements necessary reforms. Bassil stressed that if reforms are not achieved his party would be “the fiercest opponents.”

Bassil is thought to be eyeing the presidential ticket in 2022, and, along with his father-in-law Aoun, has been accused of repeatedly obstructing government formation efforts to maintain a blocking third, effective veto power in cabinet. Bassil has denied any presidential ambitions.

Tensions escalated between Bassil and Deputy Speaker Elie Ferzli (Ind./W. Bekaa-Rashaya), when Bassil accused other legislators of transferring large sums of money abroad, but stopped short of naming them.

Ferzli angrily interrupted him, saying that Bassil’s statement was a weighty accusation and that he should name the MPs.

Bassil responded, “It’s not my duty to name them; I’m not a judge.”

BEIRUT — Lebanon’s Parliament voted to grant confidence to Najib Mikati’s new cabinet on Monday, empowering it to officially begin its stated mission of setting Lebanon on a course of reforms that will help pull it from its multifaceted crisis.Following an almost one-hour delay due to electricity cuts, the legislators sat through a seven-hour session, punctuated only by a two-hour lunch...