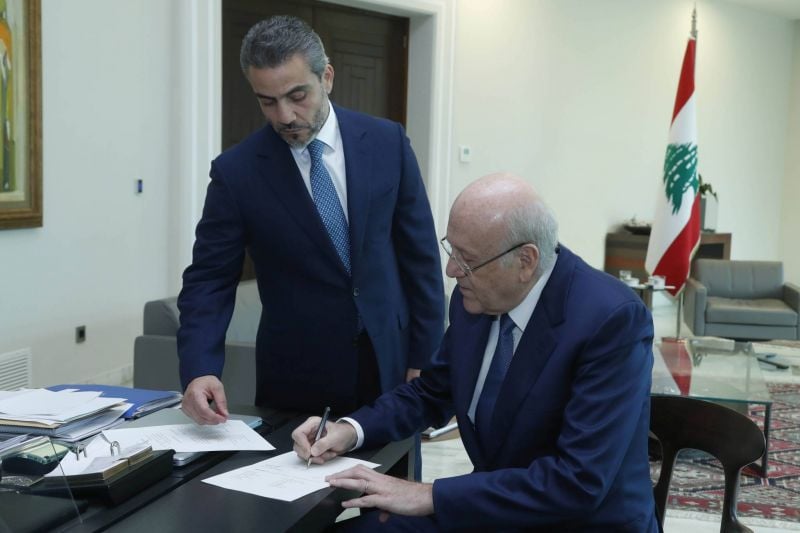 Lebanese Prime Minister Najib Mikati signs a decree for the formation of the new Lebanese government at the Presidential Palace in Baabda on Friday. (Credit: Dalati & Nohra)

BEIRUT — Officials in Lebanon announced that they had formed a new government on Friday, 13 months to the day after the last cabinet fell.

While few among the new ministers have overt political affiliations, all were appointed as part of shares of traditional political forces. According to multiple leaks, those shares were apportioned in thirds: those of the new prime minister, the president and the speaker of Parliament and their allies.

Here’s what we know about the new slate of ministers, whom they were appointed by and what their expertise is:

Bio: Mikati is a three-time prime minister and an MP for Tripoli. He first took on the office in 2005 during the crisis following former Premier Rafik Hariri’s assassination, winning confidence as Syrian troops left the country and going on to oversee national elections. He returned to the Grand Serail from 2011 to 2014, spending most of his final year as a caretaker premier. Mikati and his brother, Taha, are Lebanon’s richest men, each with nearly $3 billion, and run a vast empire that deals in real estate and construction, telecommunications, investment and other sectors.

Bio: Mawlawi has headed the Appellate Court of North Lebanon’s Seventh Chamber, which handles criminal cases, since 2017. Ashraf Rifi, a political figure from Tripoli who served as justice minister from 2014 to 2016, reportedly backed Mawlawi’s promotion to the post. A Tripoli native, Mawlawi first joined the judiciary in 1993.

Bio: Salam, who started his career as a corporate lawyer at Shearman and Sterling LLP in the US, is the vice president for business development at the US-Arab Chamber of Commerce. In 2011, then-Maryland Gov. Martin O’Malley tapped Salam, who holds a law degree from George Washington University, to serve on the state’s Middle Eastern American Affairs Commission.

Bio: Abiad rose to prominence for his efforts leading the COVID-19 pandemic response at Rafik Hariri University Hospital, Lebanon’s front-line public hospital for dealing with the virus. Abiad has a long history at AUB, where he studied and then worked as a surgeon starting in 2010 before becoming RHUH’s general manager in 2015.

Bio: Nasser Yassin is an associate professor of policy and planning at AUB, where he serves as the chair of the health management and policy department. Yassin, who earned a doctorate from University College London, was the research director at AUB’s Issam Fares Institute from 2014 to 2020, before establishing the Lebanon Crisis Observatory.

Bio: Halabi has been a vice chairperson of BBAC Bank since 2005 and a board member of the financial institution since 1987. A former judge, Halabi now heads BBAC’s legal department. He is closely associated with USJ, where he graduated from in 1972. He now heads the association of graduates from the university’s law department.

Minister of State for Administrative Development

Bio: A career diplomat, Riachi was promoted to the rank of ambassador in 2003 and was Lebanon’s envoy to the United Nations’ Office at Geneva from 2007 to 2017. She served as the director of protocol at the Foreign Affairs Ministry from Feb. 2018 to Aug. 2020, when she became the director of the foreign affairs minister’s office.

Bio: Kallas is a media and education professional who served as a dean at the Lebanese University from 2009 to 2014 and the editor in chief of the institute’s cultural journal. The Lebanese University professor has also been a culture editor at the newspaper Annahar. He received a doctorate in literature from USJ and was an adviser to a number of cultural, religious and academic institutions, including the Melkite Greek Catholic Patriarchate.

Bio: Slim was a career Lebanese Army officer who served as the military’s lead medical officer from 2009 until his retirement in 2012 at the rank of brigadier general. Selim graduated from the Lebanese Army’s military college in 1975.

Bio: An economist who received his doctorate from Vanderbilt University in the US, Bou Habib served as Lebanon’s ambassador to the US from 1983 to 1990. Bou Habib then worked as a World Bank adviser from 1992 to 2001. He had originally started his career at the Bank in 1976. In Lebanon, Bou Habib was a lecturer at Sagesse University and founded AUB’s Issam Fares Institute in 2007.

Bio: Henri Khoury retired from Lebanon’s judiciary in 2019, having risen the ranks to his final posting as head of the State Shura Council in August 2017. Khoury, who entered Lebanon’s judiciary in 1994 and is perceived as being close to the Free Patriotic Movement, was educated at Saint Joseph University (USJ) in Beirut.

Bio: A longtime energy and utilities consultant at Booz Allen Hamilton, McKinsey and Company, Booz and Company and Partners in Performance since 2019, Fayad is also on the advisory board of Beirut-based Kyle Partners. Hailing from north Lebanon’s Koura, Fayad earned a doctorate from the Massachusetts Institute of Technology, where he studied microchip reliability.

Bio: A former dental surgeon, Hajjar is the president and general manager of Message de Paix, a nonprofit organization that supports adults with special needs. He also has worked for Caritas Lebanon and founded other community organizations. Hajjar graduated with a doctorate in dentistry from USJ in Beirut.

Bio: Nassar, an engineer who pursued a number of business ventures in Lebanon and Saudi Arabia, was the president of the Lebanese Basketball Federation from 2013 to 2016. He graduated from USJ with undergraduate and graduate degrees in civil engineering.

Bio: Bouchikian is the founder and CEO of the BioDiamond medical equipment and supplies company headquartered in the Beirut suburb of Sin al-Fil and sits on the board of directors of the medical device importers syndicate. Founded in 1998, his business includes a trio of brands: BioDiamond, Technoline and MedTrade. According to his social media, Bouchikian lives in Zahle.

Minister for the Displaced

Bio: A pharmacist turned industrialist, Charafeddine is the vice president of the chemical industries syndicate and the founder of the Aley Industrialists Association. Charafeddine, whose business interests include soaps, cleaning products and cosmetics, has been an adviser of Talal Arslan — the head of the Lebanese Democratic Party — since 1991.

Bio: A 20-year veteran of the International Monetary Fund, Chami became the lead economist of the National Bank of Kuwait in 2018. From 2013 to 2017, Chami was the secretary-general of Lebanon’s Capital Market Authority, an ostensibly independent regulatory authority chaired by Banque du Liban Gov. Riad Salameh since 2012. Chami holds a doctorate in economics from McMaster University in Canada.

Bio: Khalil is widely considered one of the architects of BDL’s controversial financial engineering program. Khalil, who is also a lecturer at the American University of Beirut, first started working at the central bank in 1982, before moving on to his current position as director of the institution’s financial operations department. Khalil is also the head of the Lebanese Microfinance Association, which was founded in 2015 and has received funding from the United States Agency for International Development.

Bio: Hamieh is a consultant for Parliament’s Media and Communications Committee, which is headed by MP Hussein Hajj Hasan (Hezbollah/Baalbeck-Hermel). Hamieh, who was educated in France and earned a doctorate in optical communications from the Université de Bretagne Occidentale, is a professor at the Lebanese University and the Arts, Sciences and Technology University in Lebanon (AUL).

Bio: Bayram has served as an official in the Audit Bureau since 1998. He holds a law degree from the Lebanese University and a master’s degree in financial law from the Islamic University of Lebanon.

Bio: Mortada, who entered the judiciary in 1996, has been the head of the criminal case court in Mount Lebanon since 2019. From 2009 to 2018, while also acting as a Mount Lebanon judge, Mortada served two terms on the Higher Judicial Council, which administers Lebanon’s court system. He received his law degree from the Lebanese University and has worked as a lecturer at Beirut Arab University and Sagesse University.

Bio: A journalist who has worked for the news channel France 24 since 2010, Hajj Hassan holds a PhD in political science from Toulouse University. He has also worked for other media outlets, including the Associated Press in Beirut and Radio Orient in Paris. Hajj Hassan received a law degree from the University of Perpignan in France in 2007.

Bio: Corm is the chairperson and CEO of General Paint, a Lebanon-headquartered firm that works in automotive refinishing, with operations in the US and France. Corm received his bachelor’s degree and MBA from West Virginia University in the US before going on to work as a sales manager in Nashville, Tennessee, from 1984 to 1990.

Bio: A prominent regional TV personality who launched his own cologne brand, Kurdahi hosted the Arabic-language version of “Who Wants To Be A Millionaire?” on Saudi-owned MBC from 2004 to 2010. In 2011, Kurdahi was forced out of MBC after publicly supporting Syrian President Bashar al-Assad and joined Al-Mayadeen, a news network sympathetic to the so-called axis of resistance including Iran, the Syrian government and Hezbollah. He reprised his role on “Who Wants to Be A Millionaire?” in 2015 on OSN.

BEIRUT — Officials in Lebanon announced that they had formed a new government on Friday, 13 months to the day after the last cabinet fell.While few among the new ministers have overt political affiliations, all were appointed as part of shares of traditional political forces. According to multiple leaks, those shares were apportioned in thirds: those of the new prime minister, the president...