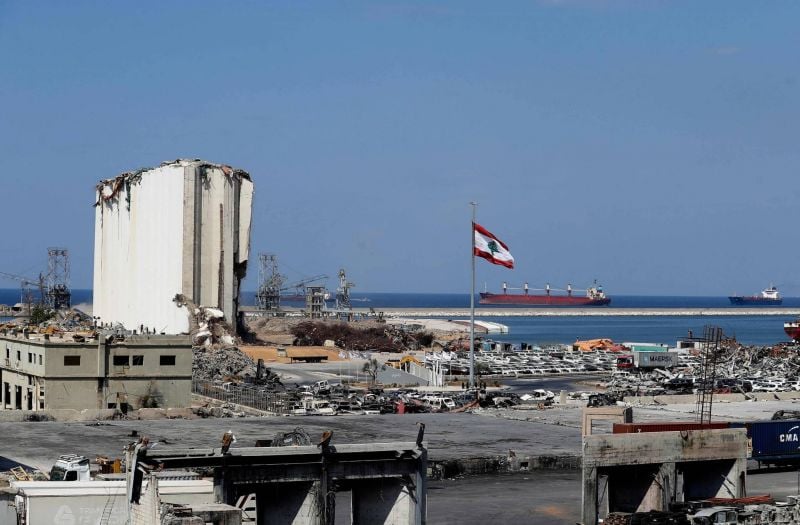 The 2020 Beirut port blast investigation has been suspended for a second time due to new complaints filed against Judge Tarek Bitar. (Credit: Joseph Eid/AFP)

Judge Tarek Bitar was officially notified of the new complaints filed by Ali Hassan Khalil and Ghazi Zeaiter on Tuesday, forcing a stoppage to his probe until the court rules on whether to remove Bitar from the investigation or dismiss the complaint. The Court of Cassation had tossed out separate cases filed by the two officials on Tuesday.

Earlier in the day, Bitar had issued an arrest warrant for Hassan Khalil after the former finance minister failed to appear for an interrogation scheduled for the morning. Zeitar was scheduled to appear for questioning on Wednesday.

The investigation into the Beirut port explosion, which killed more than 200 people and wounded thousands of others, resumed only a week ago, on Oct. 5, after another dayslong halt stemming from complaints that Hassan Khalil, Zeaiter and MP Nohad Machouk filed in the Beirut Appeals Court. A day earlier, the appellate court had ruled that it lacked jurisdiction over the case and fined the three MPs, ending a seven-day suspension of Bitar’s probe as the judges mulled the lawsuits.

Legal experts described the lawsuits filed by Hassan Khalil, Zeaiter and Machnouk at the time as yet another maneuver by the political class to stall the case and circumvent Bitar’s questioning of politicians.

Bitar is able to question the MPs only until Oct. 19, when Parliament is scheduled to go back into session and the MPs regain legal immunity that is extended to lawmakers. The MPs could also regain their immunity if President Michel Aoun calls Parliament into an extraordinary session before that date.

Bitar needs to clear other hurdles in the judicial maze as he seeks to push forward his investigation. Former Public Works Minister Youssef Fenianos has presented a legal challenge at the Court of Cassation, the highest ordinary rung of Lebanon’s criminal justice system, though this filing has not necessitated the suspension of Bitar’s probe.

On Sep. 16, Bitar issued an arrest warrant against Fenianos for failing to appear for questioning. Fenianos has not been apprehended.

Bitar took over the port blast investigation after his predecessor, Fadi Sawwan, was removed from the case on Feb. 18. He has since faced not only a slew of obstacles within the judiciary, but also withering criticism from the political class and even a threat from a Hezbollah official.

In September, a judicial source confirmed to our sister publication, L’Orient-Le Jour, that Hezbollah Liaison and Coordination head Wafic Safa had told Bitar, “We have had enough of you. We will go to the end of the legal path, and if that does not work, we will remove you by force.”

An LBCI television reporter told Reuters that Safa had approached her at the Justice Palace in Beirut to relay a message to Bitar. The journalist declined to go into details on the message.

On Monday night, Hezbollah leader Hassan Nasrallah launched a broadside against Bitar, accusing the judge of pursuing a political agenda while saying his organization “demands a transparent judge to complete the investigation” into the port explosion.

Nasrallah’s comments were just the latest suspicion voiced by Hezbollah against Bitar, which has been echoed by the political figures caught up in Bitar’s probe as well as their allies.

BEIRUT — The 2020 Beirut port blast probe was suspended for a second time on Tuesday pending new complaints against the lead investigator by two current MPs and former ministers, a judicial source told L’Orient Today.Judge Tarek Bitar was officially notified of the new complaints filed by Ali Hassan Khalil and Ghazi Zeaiter on Tuesday, forcing a stoppage to his probe until the court rules on...