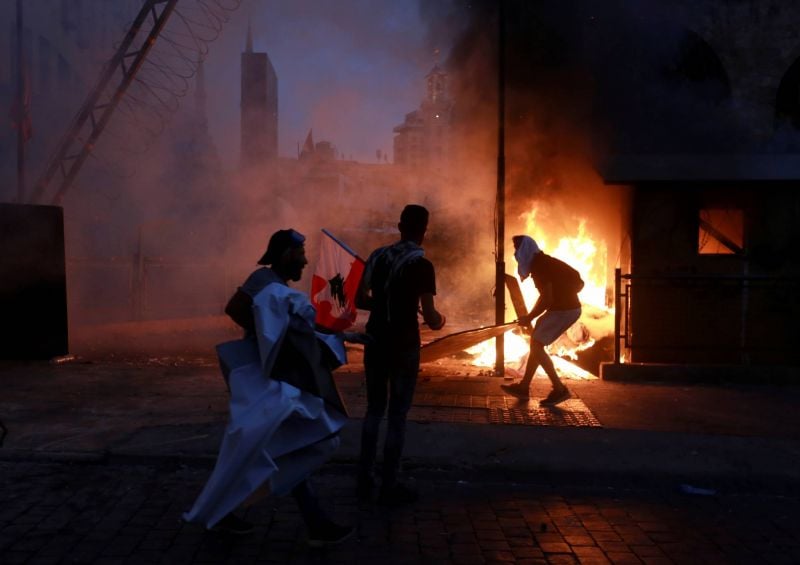 ​​BEIRUT — The investigation into the catastrophic Beirut Port explosion was suspended on Monday after the judge leading the probe was formally notified of a dismissal case against him submitted by a former interior minister implicated in the blast.

Legal experts say the move is the latest maneuvre by the political class to circumvent questioning and stall while legislators suspected in the case are currently not protected by parliamentary immunity as Parliament is not in session.

MP and former minister Nohad Machnouk filed a complaint to the Beirut Court of Appeals last week to remove Judge Tarek Bitar as investigator of the Beirut port explosion.

Once notified, Bitar was forced to suspend his work on the case. According to Article 125 of Lebanon's Code of Civil Procedure, which applies to the Court of Appeals, a judge’s work is automatically suspended when a lawsuit is filed against them.

The Court of Appeals will decide whether to dismiss the judge in the coming days.

Executive director of Legal Agenda Nizar Saghiyeh said this process could take anywhere from two weeks to a month, but he expects the Court of Appeals to say it does not have jurisdiction to remove Bitar as judge.

“So that’s why we believe this was done … to stop the investigation immediately since the judge called them [MPs] in for questioning this week.”

Wissam Laham, a constitutional law professor at Saint Joseph University, expressed similar sentiments saying he condemned the move and considered it “a maneuvre to stall for time … to have submitted the request which stops the investigation.”

Machnouk was summoned for questioning in the probe last week, along with former Finance Minister Ali Hasan Khalil and former Public Works Minister Ghazi Zeaiter, who are also both sitting Amal Movement MPs.

Legal immunity protecting parliamentarians is temporarily lifted from the three MPs, who so far have leveraged the exemption to avoid cooperating with the investigation.

However, Lebanese law says that this immunity is waived during the period from when a new cabinet received Parliament’s confidence — which took place a week ago — until Parliament’s opening session, scheduled for Oct. 19.

Bitar took the window of opportunity to summon the legislators who were scheduled to appear for questioning later this week.

Legal Agenda cited a similar case from 2007 in which Judge Elias Eid’s investigation into the 2005 assassination of former Prime Minister Rafik Hariri was stalled following a request submitted to the Court of Appeals to have him removed. The court declined, saying it did not have the jurisdiction to remove the judge as “the judicial investigator is not affiliated” with the court.

“It’s an abuse of the judiciary because everyone knows [the court] has no jurisdiction but still it’s done in order to suspend the investigation,” Saghiyeh said.

Machnouk’s complaint to the court is not the only challenge to Bitar’s investigation. Former Public Works Minister Youssef Fenianos, who Bitar has charged with criminal negligence in relation to the port explosion, requested last week that the Court of Cassation remove the judge from the case due to “legitimate suspicion” of his neutrality. Bitar issued an arrest warrant for Fenianos on Sept. 16 after he failed to show up for questioning.

The investigation for the Aug. 4 Beirut port explosion – which killed at least 218 people and wounded thousands — has dragged on for more than a year while Bitar, since taking over as head investigator in February, has repeatedly run into red tape in questioning senior Lebanese officials. The blast was the result of the detonation of tons of ammonium nitrate haphazardly stored by officials in a port warehouse. Ample evidence and documents show that high-level Lebanese security and political officials had known about the existence of the chemical for years.

Bitar’s predecessor Judge Fadi Sawwan also saw his investigation suspended before eventually being dismissed from the probe when Khalil and Zeaiter, who he called in for questioning and charged with criminal negligence, challenged the summons and asked for him to be replaced on the grounds of “legitimate suspicion.”

As news broke that Bitar’s investigation too had been suspended, the families of the blast’s victims indicated that they would not stand by silently and watch the probe stall.

“We are not going to stay quiet,” said Kayan Tleis, the head of the Committee of Families of Beirut Port Martyrs and the brother of Mohammad Tleis, who was killed in the explosion.

“We’re going to wait and see what happens in the next two days but we’re going to continue standing until justice is served.”

A protest in support of Bitar and demanding justice for the victims of the explosion is scheduled for Wednesday at Beirut’s Justice Palace, and was organized before the announcement of the probe's suspension.

​​BEIRUT — The investigation into the catastrophic Beirut Port explosion was suspended on Monday after the judge leading the probe was formally notified of a dismissal case against him submitted by a former interior minister implicated in the blast.Legal experts say the move is the latest maneuvre by the political class to circumvent questioning and stall while legislators suspected in the...